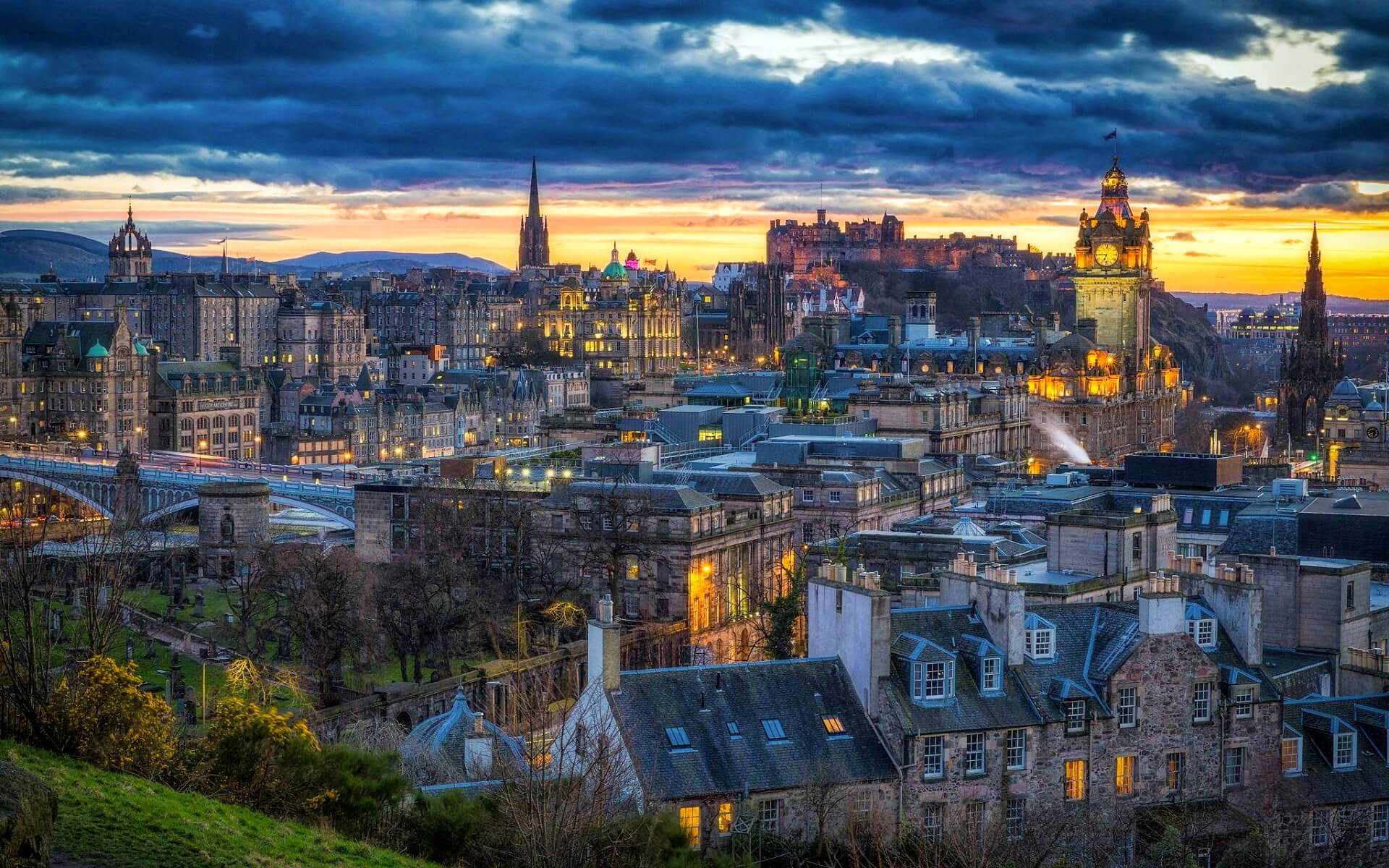 Edinburgh is Scotland’s capital city and one of the country’s 32 local government council regions. It is Scotland’s second most populous city and the United Kingdom’s seventh most populated city, located in Lothian on the southern bank of the Firth of Forth. The city of Edinburgh has a population of 464,990 people, while the local authority area has a population of 492,680. Edinburgh is the largest city in the Edinburgh & South East Scotland City Region, with a population of 1,339,380 people in 2014. Edinburgh, Scotland’s capital since at least the 15th century, is home to the Scottish Parliament and the monarchy’s seat in Scotland. The city also hosts national institutions such as the National Museum of Scotland, the National Library of Scotland, and the Scottish National Gallery, as well as the General Assembly of the Church of Scotland. After London, it is the UK’s biggest financial center.

The city has long been a center of education, notably in the disciplines of medical, Scots law, literature, science, and engineering, despite being historically part of Midlothian. In 2013 and 2014, the University of Edinburgh, which was established in 1582 and is currently one of four in the city, was ranked 17th in the QS World University Rankings. The Edinburgh International Event and the Fringe, the latter being the world’s biggest yearly international arts festival, are both well-known in the city. The historical and cultural features of the city have made it the United Kingdom’s second most popular tourist destination, behind London, with over one million international tourists each year. Edinburgh Castle, Holyrood Palace, the churches of St. Giles, Greyfriars, and the Canongate, as well as the massive Georgian New Town created in the 18th century, are all historic landmarks. Edinburgh’s Old Town and New Town are both UNESCO World Heritage Sites, and Edinburgh World Heritage has been in charge of managing both since 1999.

Edinburgh (Gaelic: Dùn ideann) is Scotland’s capital and is situated in the country’s Central Belt. With a population of over 450,000 people (1 million in the city district), “Auld Reekie” (Edinburgh) manages to blend the old and new in a distinctively Scottish ambiance. Edinburgh mixes ancient remnants, Georgian grandeur, and a dynamic stratum of modern life with current avant-garde, all under the watchful eye of the magnificent Edinburgh castle, the city’s icon. In Edinburgh, medieval palaces coexist with the best of modern architecture, such as the Houses of Scottish Parliament in Hollyrood and the recently renovated National Museum of Scotland, which are visible throughout the New Town, which is painted with Gothic churches and fascinating historical buildings. Edinburgh, known as “the Athens of the North,” is a feast for the eyes, ears, and senses, with wonderful restaurants, shopping, friendly pubs, wild and gentle clubs, and an unrivaled calendar of city festivals throughout the year. The celebrations begin with Hogmanay, the Scottish New Year, and continue through the summer with the Tattoo, the International, and the legendary ‘Fringe’ festival, among others.

Edinburgh, according to Scottish tourist authorities, has more restaurants per capita than any other city in the United Kingdom. From Michelin-starred fine meals to modest bars, travelers will find it all here. There are also restaurants that specialize in Indian, Mediterranean, or Chinese cuisine, as well as traditional Scottish fare, seafood, and Indian, Mediterranean, or Chinese cuisine. There’s a restaurant in Edinburgh that serves it if you’re craving it. The following are some classic Scottish recipes.

In 1995, UNESCO designated Edinburgh’s Old and New Towns as World Heritage Sites. With its designation as a City of Literature in 2004, Edinburgh became the first member of the UNESCO Creative Cities project.

If you plan on remaining in Scotland for a time, you may want to consider joining Historic Scotland . Passes are roughly £40 for adults and £30 for concessions for a year (including full-time students). They provide you unrestricted entry to over 70 paid locations in Scotland, including Edinburgh Castle and Craigmillar Castle. You also receive a lot of discounts in their stores, a quarterly magazine, and 50% off all historical sites in England, Wales, and Manx.

WHEN SHOULD YOU GO?

During the major festival seasons of high summer (August to early September) and Hogmanay (around New Year’s Day / 1 January), Edinburgh gets disproportionately congested (accommodation-wise). Visitors should reserve central accommodation and event tickets well in advance (even more than a year in advance!) during these seasons.

From May through September, the weather in Edinburgh is at its most pleasant. Regardless of the season, the weather in Edinburgh is continually changing, and tourists can anticipate both sunshine and rain. When it rains, Edinburgh may be rather windy, so bring a raincoat or a robust umbrella with you! The continuous, whipping gusts have forced several tourists to discard their inverted umbrellas. Summer, the major festival season, has long daylight hours and long nights (it seldom gets dark before 10 or 11 p.m. up here!). Winter in Edinburgh may be very cold, with short daylight hours, although snow is uncommon and only lasts a few days, and the majority of the city’s winter precipitation is in the form of icy rain and sleet. Edinburgh boasts a plethora of indoor attractions and activities to keep you occupied throughout the harsh winter months. To put it another way, big boy, will you bring a coat? In the winter, do not be concerned about being chilly since, as in many contemporary nations, all buildings, even older ones, are warm, dry, and insulated.

Edinburgh is located in Scotland’s Central Belt, on the southern coast of the Firth of Forth. As the crow flies, the city center is 2 12 miles (4.0 km) southwest of Leith’s beach and 26 miles (42 km) inland from Scotland’s east coast and the North Sea at Dunbar. While the early burgh grew up around the conspicuous Castle Rock, the present city is believed to be constructed on seven hills: Calton Hill, Corstorphine Hill, Craiglockhart Hill, Braid Hill, Blackford Hill, Arthur’s Seat, and the Castle Rock, alluding to Rome’s seven hills.

With 43 percent of the population possessing a degree-level or professional status, Edinburgh has the strongest economy of any city in the United Kingdom outside of London and the largest proportion of professionals in the UK. It is the most competitive big city in the United Kingdom, according to the Centre for International Competitiveness. Outside of London, it also has the greatest gross value added per employee, with £57,594 in 2010. In the Financial Times fDi magazine awards 2012/13, it was voted European Best Large City of the Future for Foreign Direct Investment and Best Large City for Foreign Direct Investment Strategy.

Edinburgh’s economy was recognized for banking, printing, and brewing in the nineteenth century. Financial services, scientific research, higher education, and tourism are the mainstays of the country’s economy today. Edinburgh’s unemployment rate was 3.6 percent in March 2010, and it has been consistently below the Scottish average of 4.5 percent since then. After London, Edinburgh is the second most visited city in the United Kingdom by international tourists.

Since the Bank of Scotland (now part of the Lloyds Banking Group) was created by an act of the Scottish Parliament in 1695, banking has been a pillar of the Edinburgh economy. Today, Edinburgh is the UK’s second financial hub after London, and Europe’s fourth in terms of equity assets, thanks to the city’s strong insurance and investment industries, which are bolstered by Edinburgh-based enterprises such as Scottish Widows and Standard Life. In October 2005, the Royal Bank of Scotland moved its worldwide headquarters to Gogarburn in the city’s west end, and Bank of Scotland, Sainsbury’s Bank, Tesco Bank, TSB Bank, and Virgin Money also have offices in Edinburgh.

Tourism is also a significant contributor to the city’s economy. Tourists visit historical landmarks such as Edinburgh Castle, the Palace of Holyroodhouse, and the Old and New Towns as part of the World Heritage Site. Each year in August, their numbers are boosted by the Edinburgh Festivals, which draw 4.4 million tourists and produce over £100 million for the local economy.

The public sector, at the heart of Scotland’s government and judicial system, is vital to Edinburgh’s economy. Many Scottish Government ministries are located in the city. NHS Scotland and local government administration are two other important employers.