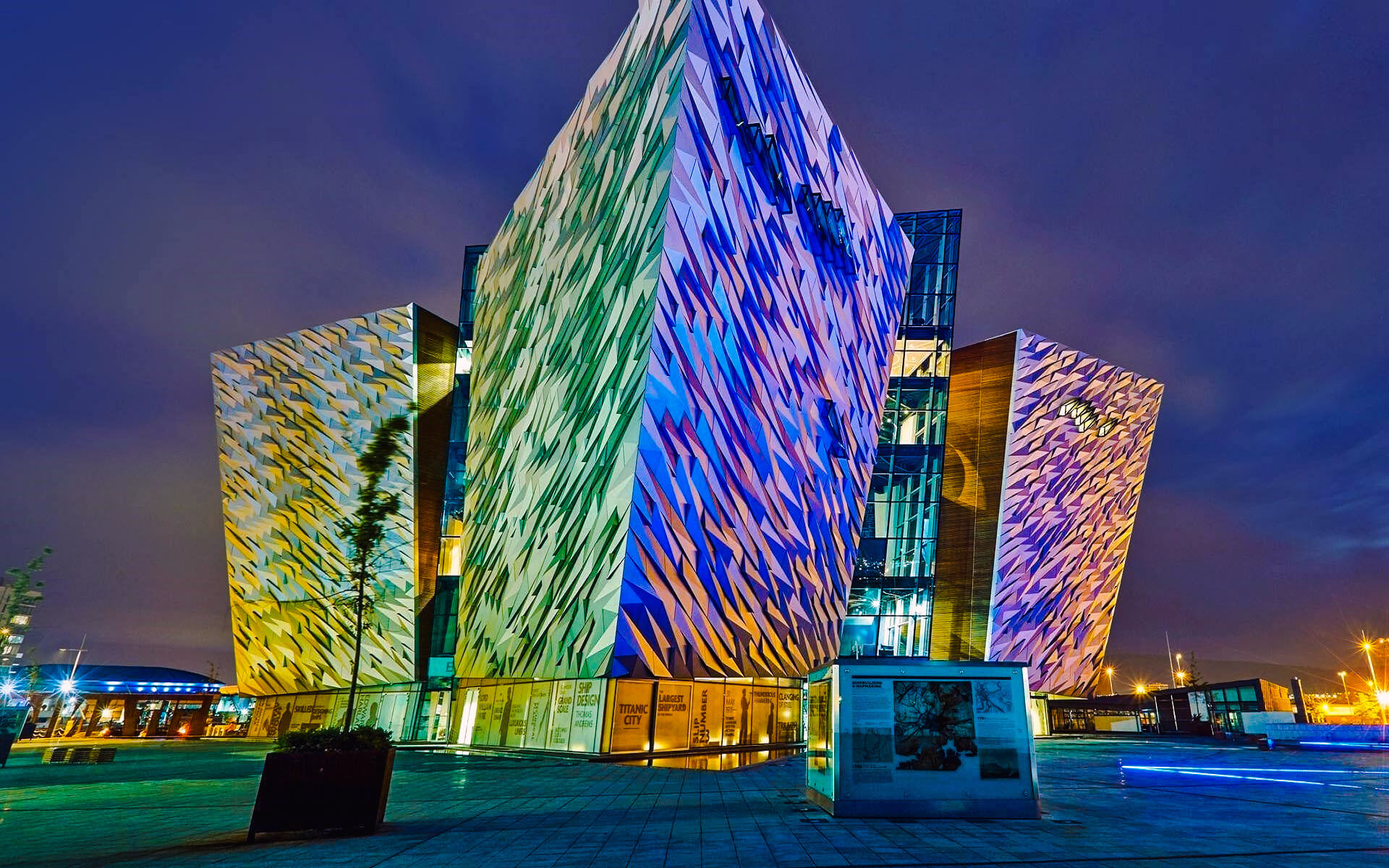 Belfast is the capital and biggest city of Northern Ireland, as well as the tenth largest city in the United Kingdom and the second-largest on the island of Ireland, after Dublin. Belfast, located on the River Lagan, had a population of 286,000 at the time of the 2011 census and 333,871 following the 2015 council reform. Belfast was awarded city status in 1888.

Today, Belfast is the economic engine of Northern Ireland, serving as a center for industry, the arts, higher education, business, and law. The city suffered significantly during the war known as “the Troubles,” but has since seen a prolonged period of quiet, free of the terrible political bloodshed of previous years, as well as significant economic and commercial expansion. Furthermore, the city center of Belfast has seen significant development and reconstruction in recent years, particularly around Victoria Square.

Belfast has two airports: George Best Belfast City Airport, which is located in the city, and Belfast International Airport, which is located 15 miles (24 kilometers) west of the city. Belfast is a large port, with commercial and industrial facilities dominating the Belfast Lough coastline, including the Harland and Wolff shipyard, and is designated as a global city by the Globalization and World Cities Research Network (GaWC).

Since the 1998 agreement, much of the politically driven violence has subsided. Belfast was recently named the safest city in the United Kingdom, based on a comparison of national crime numbers, and as part of its commitment to peace, it now wants visitors from all over the globe, particularly from nations other than the Irish Republic and the United Kingdom.

Residents of Belfast either like or despise the city, yet the outsider’s view is more forgiving, since Belfast was recently rated the fourth greatest city in the UK for a city break in the Guardian/Observer travel awards. Needless to say, a visit to Belfast will reward you with a view of a unique city that has now started to cherish, rather than fight over, its status as a cultural crossroads between the United Kingdom and Ireland. Belfast exudes a resolute optimism, with new hotels, pubs, restaurants, clubs, and stores springing up at a breakneck pace. It’s a city that’s proud of its Victorian and Edwardian past, and attempts to repair old structures are yielding positive results. Northern Ireland is seeing a surge in tourism, particularly among those looking for a weekend getaway or short stay in Ireland, since Belfast may be a much cheaper and more rewarding option than Dublin, which is busier, more costly, and more tourist-driven.

Belfast is still an excellent destination to visit since it is still relatively unknown compared to its Dublin neighbor, and it is suitable for those who want to see a city with character but yet have a raw, unspoiled vitality. A vacation to Northern Ireland’s capital will be more fascinating because, once you scratch the surface, it’s easier to look beyond the ethno-political struggle of the past. It’s a city that’s transformed radically in a decade as a result of the peace and prosperity, and you’ll be welcomed with warmth by residents who have a renewed feeling of pride in their city. Indeed, the old adage that you will be greeted like an old friend by the customers of Belfast’s numerous pubs and bars is accurate, as the locals are eager to learn what brings you to their small corner of the globe and, of course, to share a little piece of their history with you! Any native will tell you that a trip to Belfast will teach you much more about the Irish and British mindset than a visit to a clichéd Irish bar in Dublin or a tourist-focused tour in London.

Some recent events, particularly the flag demonstrations, may have deterred visitors from visiting Belfast, although violence is low and the city is more or less tranquil.

The strategically placed Belfast Welcome Centre (Tourist Office) in 47 Donegall Place, immediately north of City Hall, should be your first point of contact to make the most of your visit in the city. Just to the left of the Boots Pharmacy is an elevator and escalator that will take you to the first level center. The employees can give maps, make reservations for lodging and excursions, suggest itineraries and points of interest, and sell you expensive and garish gifts. There is also a convenient baggage storage area.

Belfast has a temperate or oceanic climate, similar to the rest of Ireland, with a limited range of temperatures and rainfall throughout the year. Due to the warming impact of the Gulf Stream, Belfast’s climate is much milder than several other sites in the globe at a comparable latitude. Helens Bay, Stormont, Newforge, Castlereagh, and Ravenhill Road are the five weather stations in the Belfast region. Aldergrove Airport is a little farther away. On July 12, 1983, the highest temperature ever recorded at any official weather station in Belfast was 30.8 °C (87 °F) at Shaws Bridge. On 14 August 2001, Belfast set a new record for Northern Ireland’s hottest nighttime low, with a temperature of 19.6 °C (67.3 °F) at Whitehouse.

Belfast is located near the mouth of the River Lagan and at the western end of Belfast Lough, making it a perfect site for the shipbuilding industry that once made it renowned. Harland & Wolff had the world’s biggest shipyard when the Titanic was constructed in Belfast in 1911–1912. Belfast is located at 54°35′49′′N 05°55′45′′W on Northern Ireland’s eastern coast. As a result of its northern location, it has both short winter days and lengthy summer nights. Local sunset occurs before 16:00 on the winter solstice, the shortest day of the year, and dawn is about 08:45. The summer solstice in June, when the sun sets after 22:00 and rises before 05:00, counteracts this.

The signing of the Good Friday Agreement in 1998 and the IRA ceasefire in 1994 have given investors more confidence in investing in Belfast. As a result, the city has seen continuous economic growth and large-scale renovation. Victoria Square, the Cathedral Quarter, and the Laganside, which includes the Odyssey complex and the historic Waterfront Hall, are among the new developments.

Other noteworthy improvements include the revitalization of the Titanic Quarter and the construction of the Obel Tower, the island’s highest building. Belfast is now the educational and commercial capital of Northern Ireland. Belfast’s unemployment rate was 4.2 percent in February 2006, lower than the Northern Ireland and UK averages of 5.5 percent. Employment has increased by 16.4% in the last ten years, compared to 9.2% for the UK as a whole.

The city’s housing values have skyrocketed as a result of Northern Ireland’s peace dividend. Belfast’s property prices increased by 50% in 2007, the highest pace of rise in the UK. The typical property in Belfast cost £91,819 in March 2007, with the average in south Belfast costing £141,000. Belfast has the lowest proportion of owner occupancy in Northern Ireland, at 54 percent, in 2004.

The number of visitors visiting Belfast has increased as a result of the peace. In 2005, there were 6.4 million visitors, an increase of 8.5 percent over 2004. The tourists spent £285.2 million, resulting in the creation of around 15,600 employment. In 2006, the number of visitors increased by 6% to 6.8 million, with tourists spending £324 million, up 15% from 2005. The city’s two airports have contributed to make it one of Europe’s most popular weekend getaways.

According to a recent economic assessment by Howard Spencer, Belfast has had the fastest-growing economy among the UK’s thirty major cities over the last decade. He remarked on the study, “That’s because [of] the fundamentals of the UK economy and [because] people truly want to invest in the UK.”

Despite higher levels of corporate tax in the UK than in the Republic, BBC Radio 4’s World reported. The nation is receiving “massive sums” of foreign investment.

The Belfast economy is rising, according to The Times: “Northern Ireland was the fastest-growing regional economy in the UK in the 1990s, according to the region’s development agency, with GDP increasing 1% per year faster than the rest of the nation. The service industry, like any modern economy, is critical to Northern Ireland’s development and is thriving. The area, in particular, has a thriving tourism economy, with record levels of tourists and tourist income, and has established itself as a major contact center site.” Since the conclusion of the violence in Northern Ireland, tourism has exploded, supported by cheap prices.

Belfast has been dubbed “The New Celtic Tiger” by Der Spiegel, a German weekly magazine for politics and economics.