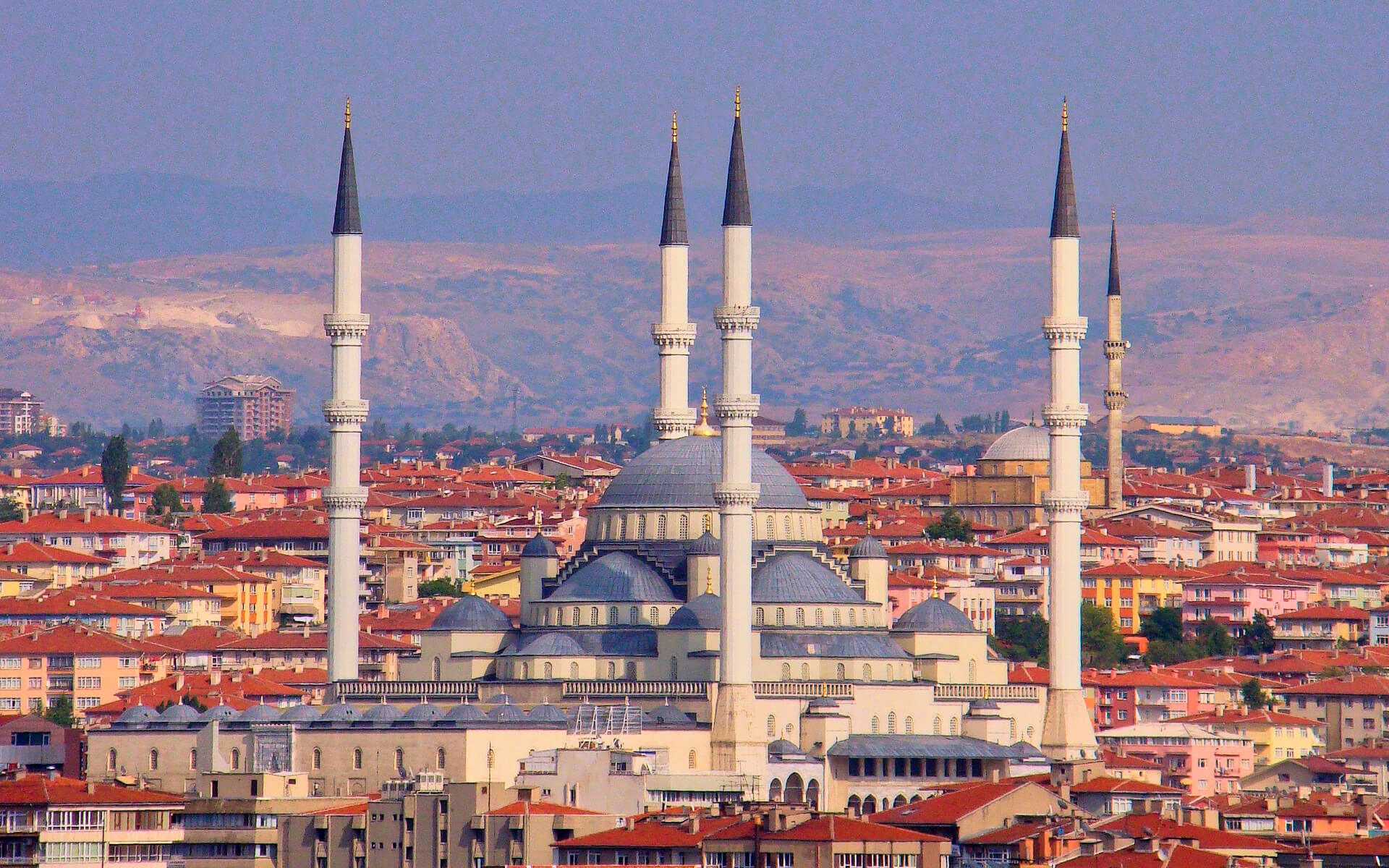 Ankara is Turkey’s capital and is situated in Central Anatolia. It is Turkey’s second biggest city, behind Istanbul, with a population of 4,587,558 in the city center and 5,150,072 across the province.

Ankara was Atatürk’s headquarters from 1920 to 1923, and it has been the capital of the Republic of Turkey since its inception in 1923, replacing Istanbul when the Ottoman Empire fell. The government is a major employer, but Ankara is also a significant commercial and industrial metropolis, positioned at the crossroads of Turkey’s road and railway networks. Pears, honey, and muscat grapes are also grown in the region.

Ankara is a very ancient city having archaeological remains from the Hittite, Phrygian, Hellenistic, Roman, Byzantine, and Ottoman periods.

Ankara is Turkey’s administrative center and a significant university town, hence it has a sizable population of government employees and university students. Because Ankara is home to a significant number of foreign diplomats and embassy employees, it provides products and services that may be more difficult to get in other Turkish towns, such as ordering a coffee or a cheeseburger.

Ankara is a huge, contemporary metropolis that, at first view, seems to be nothing more than a drab, concrete jungle. As a consequence, many people just utilize it as a stopover on their way to sites like Konya or Cappodocia. Ankara, on the other hand, has a lot to offer for those willing to dig a little deeper.

Foreign tourists to Ankara often visit the historic stores on krkçlar Yokuşu (Weavers’ Road) in Ulus, where they may find a wide variety of items at low costs, including traditional textiles, hand-woven carpets, and leather goods. Bakrclar arşs (Bazaar of Coppersmiths) is quite popular, and many unique products, other than copper, may be obtained here, such as jewelry, carpets, costumes, antiques, and needlework. Many stores provide a large and fresh selection of spices, dried fruits, nuts, and other products up the hill to the castle gate.

Modern shopping areas are mostly found in Kzlay or on Tunal Hilmi Avenue, including the modern mall of Karum (named after the ancient Assyrian merchant colonies called Kârum that were established in central Anatolia at the beginning of the 2nd millennium BC) at the Avenue’s end; and in ankaya, the city’s highest elevation quarter. The Atakule Tower in ankaya, near to the Atrium Mall, boasts a wonderful view over Ankara and also features a rotating restaurant at the top, where the city’s panorama may be experienced slowly.

There are around 50 museums in the city.

According to the Köppen classification, Ankara has a hot-summer continental climate (Dsa) and a hot summer continental (Dca) or hot summer oceanic climate (Doa) according to the Trewartha classification. Ankara has cold, snowy winters and hot, dry summers due to its height and inland position. Rainfall is most common in the spring and autumn. Ankara has a dry summer continental climate with a warm summer subtype (Dsb) according to Köppen climate classification, with certain sections of the province having a genuine warm summer subtype (Dsb) of continental climate depending on elevation. Its climate is close to that of a cold semi-arid environment (BSk). Because to Ankara’s high altitude and dry summers, overnight temperatures are cold throughout the summer months. Ankara is located in USDA Hardiness Zone 7b. Although Ankara’s annual average precipitation is very modest at 400 millimeters (16 in), precipitation may be seen throughout the year. The monthly mean temperature ranges from 0.3 degrees Celsius (32.5 degrees Fahrenheit) in January to 23.5 degrees Celsius (74.3 degrees Fahrenheit) in July, with an annual mean temperature of 12.02 degrees Celsius (53.6 degrees Fahrenheit).

For generations, the city has exported mohair (from the Angora goat) and Angora wool (from the Angora rabbit) globally. The city also exported significant quantities of goat and cat skins, gum, wax, honey, berries, and madder root in the nineteenth century.

The Central Anatolia Region is one of Turkey’s principal grape and wine producing regions, and Ankara is notably notable for its Kalecik Karas and Muscat grapes, as well as its Kavakldere wine, which is produced in the city’s Kavakldere suburb inside the ankaya district. Ankara is also well-known for its pears. Another well-known natural product of Ankara is its indigenous honey (Ankara Bal), which is distinguished by its light hue and is mostly produced by the Atatürk Forest Farm and Zoo in the Gazi district, as well as additional facilities in the Elmada, ubuk, and Beypazar districts.