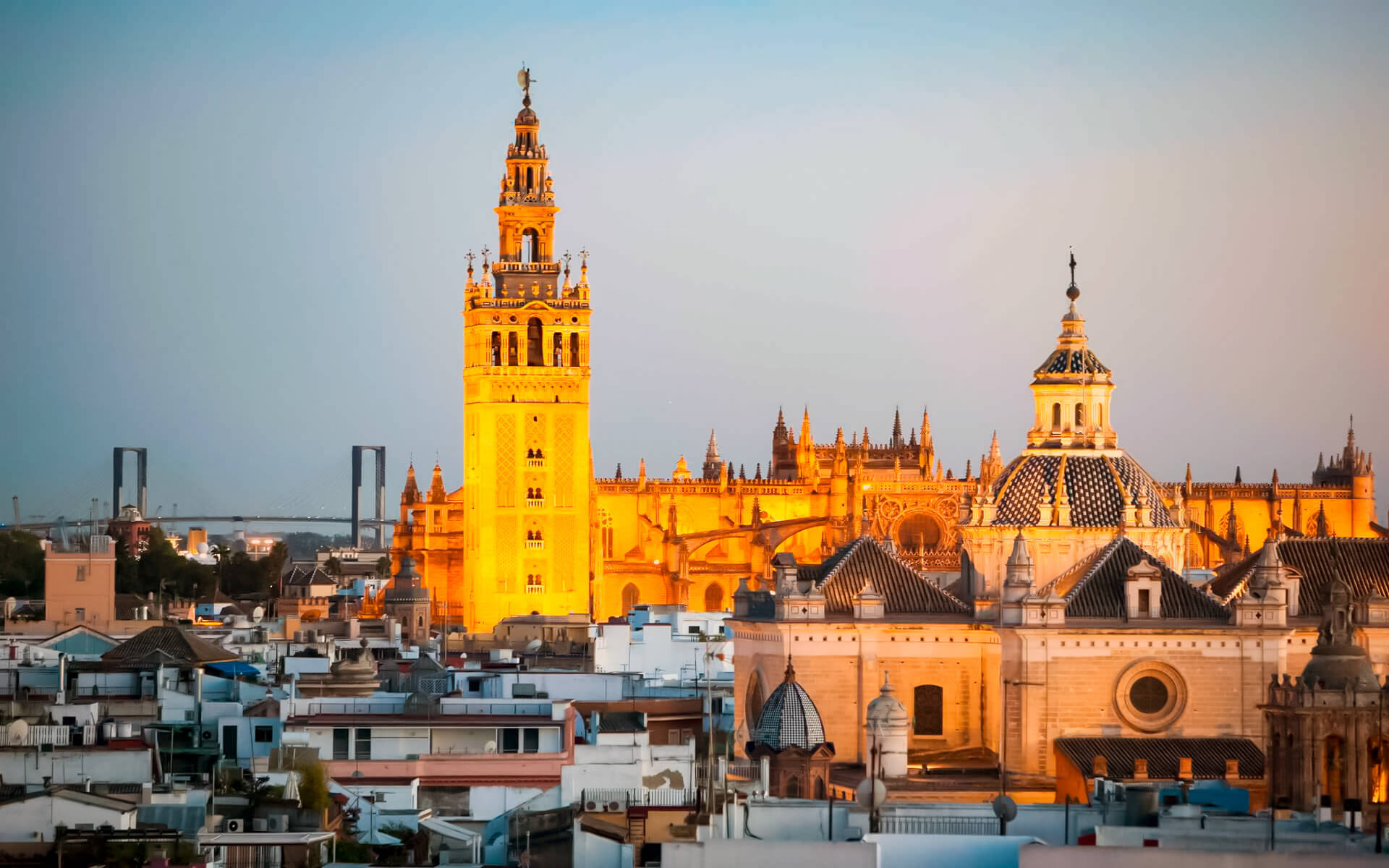 Seville is the capital and biggest city of Andalusia and the province of Seville in Spain. It is located in the Guadalquivir River plain. The city’s residents are known as sevillanos (feminine form: sevillanas) or hispalenses, from the city’s Roman name, Hispalis. As of 2011, Seville has a municipal population of over 703,000 and a metropolitan population of approximately 1.5 million, making it the fourth-largest city in Spain and the 30th most populated municipality in the European Union. Its Old Town, the third biggest in Europe, is home to three UNESCO World Heritage Sites: the Alcázar palace complex, the Cathedral, and the General Archive of the Indies. The only river port in Spain is at Seville, roughly 80 kilometers (50 miles) from the Atlantic Ocean. Seville is also Europe’s warmest major metropolitan region, with July average high temperatures exceeding 35 °C.

Seville began as the Roman city of Hispalis. After the Muslim conquest in 712, it was renamed Ishbiliya. During Muslim administration in Spain, Seville was subject to the Caliphate of Córdoba before becoming the autonomous Taifa of Seville; afterwards, it was administered by the Muslim Almoravids and Almohads until being absorbed into the Christian Kingdom of Castile under Ferdinand III in 1248. Following the discovery of the Americas, Seville became one of the Spanish Empire’s economic centers, as its port monopolized trans-oceanic commerce and the Casa de Contratación (House of Trade) held authority, ushering in a Golden Age of arts and literature. Ferdinand Magellan set sail from Seville in 1519 on the first voyage of the Earth. The 17th century in Seville was the most spectacular blossoming of the city’s culture, coinciding with the Baroque era of European history; thereafter started a slow economic and population collapse as silting in the Guadalquivir drove the trade monopoly to shift to the adjacent port of Cádiz.

The twentieth century in Seville witnessed the Spanish Civil War, important cultural landmarks such as the Ibero-American Exposition of 1929 and Expo ’92, and the city’s election as the headquarters of the Autonomous Community of Andalusia.

Seville is Andalucia’s capital and the cultural and commercial center of southern Spain. Seville, with a population of little over 700,000 (1.6 million in the metropolitan area, making it Spain’s fourth biggest city), is the top attraction in Andalucia, with lots to offer the tourist.

The city is divided into two parts by the Guadalquivir River, which flows smoothly and slowly. The Guadalquivir (known as Betis by the Romans and Betik Wahd-Al-Khabir by the Arabs) has had a significant influence on the city’s history. Seville’s position nearly coincides with the point at which the Guadalquivir River ceases to be navigable. The cereal-producing area of the Guadalquivir Valley begins here, and Seville has served as a seaport for agricultural commodities produced farther west. Intense commerce flourished in the region since Roman times, persisted under Muslim authority, and surged when Seville monopolized new trade with the Americas. As the monopoly was abolished and Cádiz mainly replaced Seville, the city fell into a period of relative decline.

Seville earned a reputation for its architecture and culture in the nineteenth century, and it was a stop on Europe’s Romantic “Grand Tour.” Since then, Seville has expanded its tourist business by hosting the International Exposition in 1992, which prompted the building of a new airport, a new railway station, a bullet train connection to Madrid, new bridges, and renovations to the principal boulevards. The tourist infrastructure is excellent, and the city is alive with festivals, color, and a booming nightlife scene.

Visitors to Seville might consider acquiring a Sevilla Card, which is meant to help in city discovery while also conserving valuable travel expenses. The card includes free admission to most Seville museums and monuments, unlimited public transportation (TUSSAM Buslines, NB: only for Cards with Public Transportation), a guided tour of Seville’s Real Alcazar, unlimited use of sightseeing buses, boat rides on the Guadalquivir River, and admission to the Isla Mágica Theme Park. The card also grants adults and children considerable discounts in stores, restaurants, entertainment, and recreation centers. The Sevilla card comes with a handbook and a city map. Please keep in mind that the Sevilla Card cannot be used on trams or buses.

The Sevilla card is available in three denominations of one, two, or three days in blocks of 24 hours from the moment of initial activation when inserted into the electronic validation terminals of the Sevilla Card Programme’s providers (be careful not to activate too soon).

The Sevilla Card is available for purchase in the following ways: Online; via phone +34 91 600 21 21 / 902 088 908; and in Seville, at tourist offices, airports, railway stations, travel agencies, and through national and international tour operators (check the website for addresses).

If you only want to use the local buses, you may either pay the €1.40 single fee or buy a bonobus, a 10-trip travel card. Most kiosks and tabacarias have bonobuses (tobacco shops). Regular timings are maintained until roughly 11:30 p.m., after which night buses operate on the hour, with modified routes, until 2 a.m.

Seville has a Mediterranean subtropical climate. Seville, like other Mediterranean climates, has a dry summer and a rainy winter. The yearly average temperature is 25 degrees Celsius (77 degrees Fahrenheit) during the day and 13 degrees Celsius (55 degrees Fahrenheit) at night. Summer is the major season, lasting from May to October, despite the declining daylight and inland location.

According to the National Topographic Map (Mapa Topográfico Nacional) series from the Instituto Geográfico Nacional – Centro Nacional de Información Geográfica, the country’s civilian survey organization, Seville has a land area of 140 km2 (54 sq mi) (pages 984, 985 and 1002). The city is located in the lush Guadalquivir River basin. The average elevation above sea level is 7 meters (23 feet). The majority of the city lies on the east bank of the river, with Triana, La Cartuja, and Los Remedios on the west. The Aljarafe region is located farther west and is part of the metropolitan area. The city shares borders with La Rinconada, La Algaba, and Santiponce on the north; Alcalá de Guadaira on the east; Dos Hermanas and Gelves on the south; and San Juan de Aznalfarache, Tomares, and Camas on the west.

Seville is located on the same parallel as San Francisco and the neighboring Bay Area on the west coast of the United States. Furthermore, So Miguel, the major island in the Azores archipelago, is located on the same latitude. It is located in the Mediterranean Basin, east of Seville, on the same latitude as Catania, Sicily, Italy, and slightly south of Athens, Greece’s capital. Even farther east, it lies on the same parallel as Seoul, South Korea’s capital. Seville is just a few miles inland from the Andalusian coast, but it has a far more continental climate than the closest port cities, such as Cadiz and Huelva – but it is much too warm in winter to be considered a ‘true’ continental location. It is a relative distance from the country’s three bigger cities, as well as Lisbon in Portugal, making it by far the biggest city in the Iberian peninsula’s south.

Seville is the most populous city in southern Spain, with the highest GDP (Gross Domestic Product) of any city in Andalusia, accounting for one-quarter of the region’s overall GDP. All communities in the metropolitan region rely on Seville’s economy, either directly or indirectly, while agriculture dominates the economies of the smaller towns, with minor industrial activity concentrated in industrial parks. The Diputacion de Sevilla, with provincial headquarters at the Antiguo Cuartel de Caballera (Old Cavalry Barracks) on Avenida Menendez Pelayo, offers governmental services to remote areas that they cannot supply for themselves. The University of Seville and the University Pablo de Olavide are prominent learning institutions in western Andalusia, offering a diverse variety of academic programmes; as a result, the city attracts a great number of students from Huelva and Cádiz.

Seville’s economic activity cannot be separated from the city’s physical and urban setting; the capital of Andalusia is the center of a rising metropolitan region. Aside from classic neighborhoods like Santa Cruz and Triana, areas farther distant from the center, such Nervión, Sevilla Este, and El Porvenir, have witnessed recent economic boom. This metropolitan region had tremendous population expansion and the building of new industrial and commercial parks prior to the 2007 economic crisis.

During this time, the city’s infrastructural availability helped to the establishment of an economy dominated by the service sector, but in which industry still plays a significant role.

The local government operates a free (1-hour) internet café in the center, directly adjacent to the tourist office.