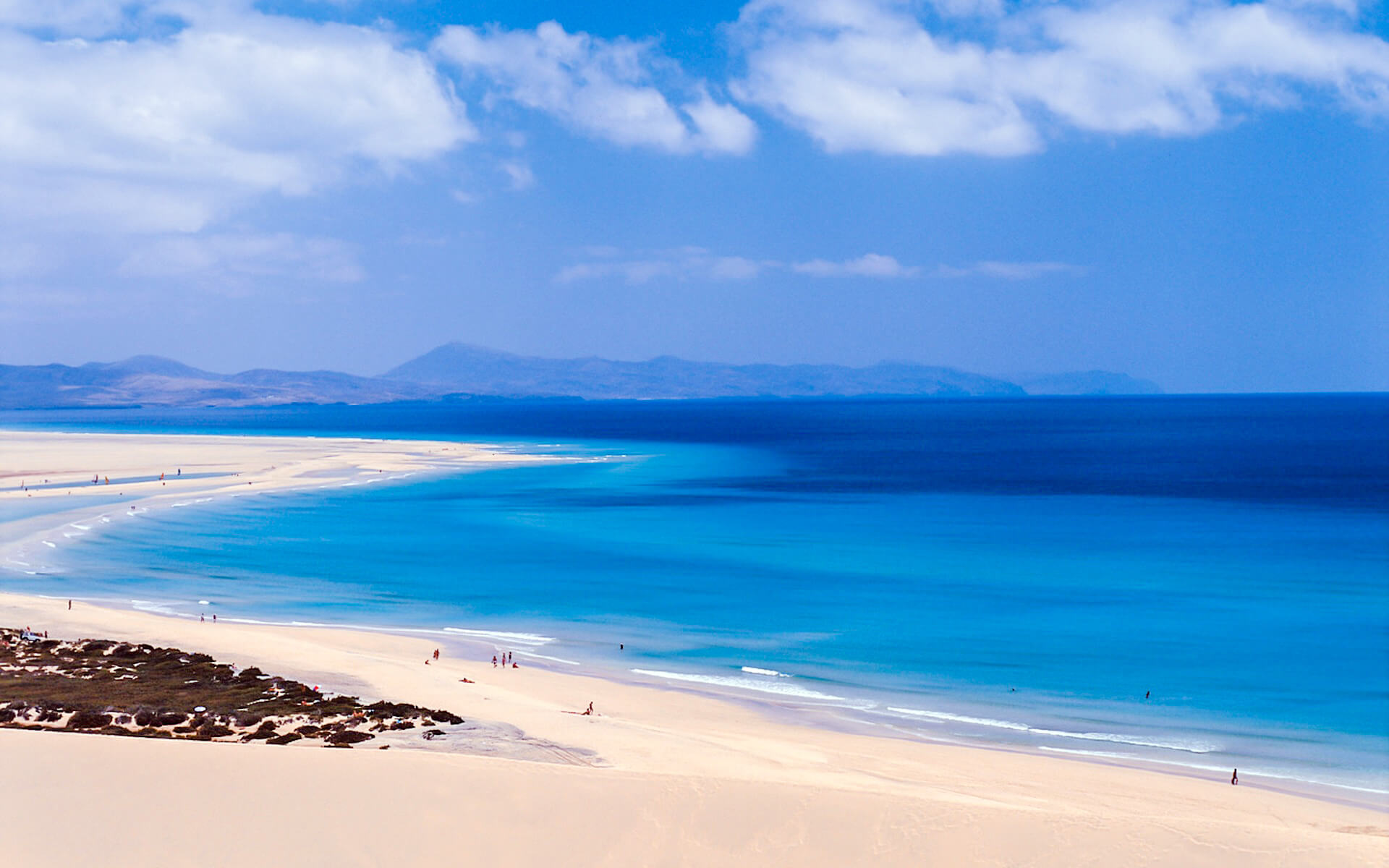 Fuerteventura (literally “strong fortune,” although others read it as “Strong Winds” or a translation of the French phrase for “Great Adventure”) is one of the Canary Islands, located in the Atlantic Ocean off the coast of Africa. It is officially part of Spain. It is the second biggest of the Canary Islands, after Tenerife, with an area of 1,660 square kilometers (641 square miles). In May 2009, UNESCO designated it as a biosphere reserve. Puerto del Rosario is its capital.

In 1965, the first tourist hotel was erected, followed by the building of Fuerteventura Airport at El Matorral, ushering in a new age for the island. Fuerteventura, with its 3,000 sunny hours per year, has firmly established itself as a significant European vacation destination. Despite having fully established tourist amenities, the island has avoided the overdevelopment seen on some other islands, and hence caters to travelers drawn by its rough natural beauty.

The summer Trade Winds and winter Atlantic swells make this a year-round surfers’ paradise, with more exposed areas on the north and west shores, such as Corralejo and El Cotillo, being particularly popular. Wind surfing is practiced at many areas along the island. Sailors, scuba divers, and big-game anglers are all lured to these brilliant blue Atlantic seas, which are frequented by whales, dolphins, marlin, and turtles. Hikers are drawn to this island because of the various hills that dot the landscape.

Many areas have beautiful sandy beaches. Strong surf may be expected on western beaches, such as those around El Cotillo. Popular beaches include those next to the huge sand dunes east of Corralejo, as well as the more sheltered broad sandy shoreline of the Playa de Sotavento de Jandia on the southeastern coast between Costa Calma and the Morro Jable. Naked sunbathing and swimming are practically universal on all beaches.

Much of the interior, with its vast plains, lavascapes, and volcanic mountains, is protected, however organized excursions and car access are available.

The Calima sandstorm (similar to the Sirocco wind, which blows south from the Sahara into Europe) comes northeast from the Sahara Desert, causing high temperatures, reduced visibility, and drying air. Temperatures increase by around 10 degrees Celsius during this event. The wind blows on fine white sand, and visibility may dip to 100 to 200 m (328.08 to 656.17 ft) or lower, bringing African locusts to the island.

The island’s total size is 1,660 km2 (641 sq mi). The island is 100 kilometers (62 miles) in length and 31 kilometers (19 miles) in width. It is under the jurisdiction of the province of Las Palmas. It is split into six municipalities, which are as follows:

These municipalities are responsible for the distribution of 100 separate villages. Islote de Lobos, a neighboring islet, is part of the municipality of La Oliva.

It is the second largest island in the archipelago, after Tenerife, and boasts the longest beaches in the archipelago. It is located barely 100 kilometers (62 miles) off the coast of north Africa. The island is a popular location for sunbathers, beachgoers, and watersports aficionados. It is located in the same latitude as Florida and Mexico, and temperatures seldom drop below 18 °C (64 °F) or climb over 32 °C (90 °F). There are 152 beaches along the coastline, with 50 kilometers (31 miles) of fine white sand and 25 kilometers (16 miles) of black volcanic shingle.

Fuerteventura’s economy is mostly reliant on tourism. The main tourist destinations are centered on the existing settlements of Corralejo in the north and Morro Jable in Jandia, as well as the exclusively tourism development of Caleta de Fuste south of Puerto del Rosario. Fisheries and agriculture are two more important sectors (cereals and vegetables). Majorero cheese is manufactured in the region from the milk of the indigenous majorera goat.

Fuerteventura had the highest EU regional unemployment rate at a NUTS3 level in 2009, at 29.2 percent.