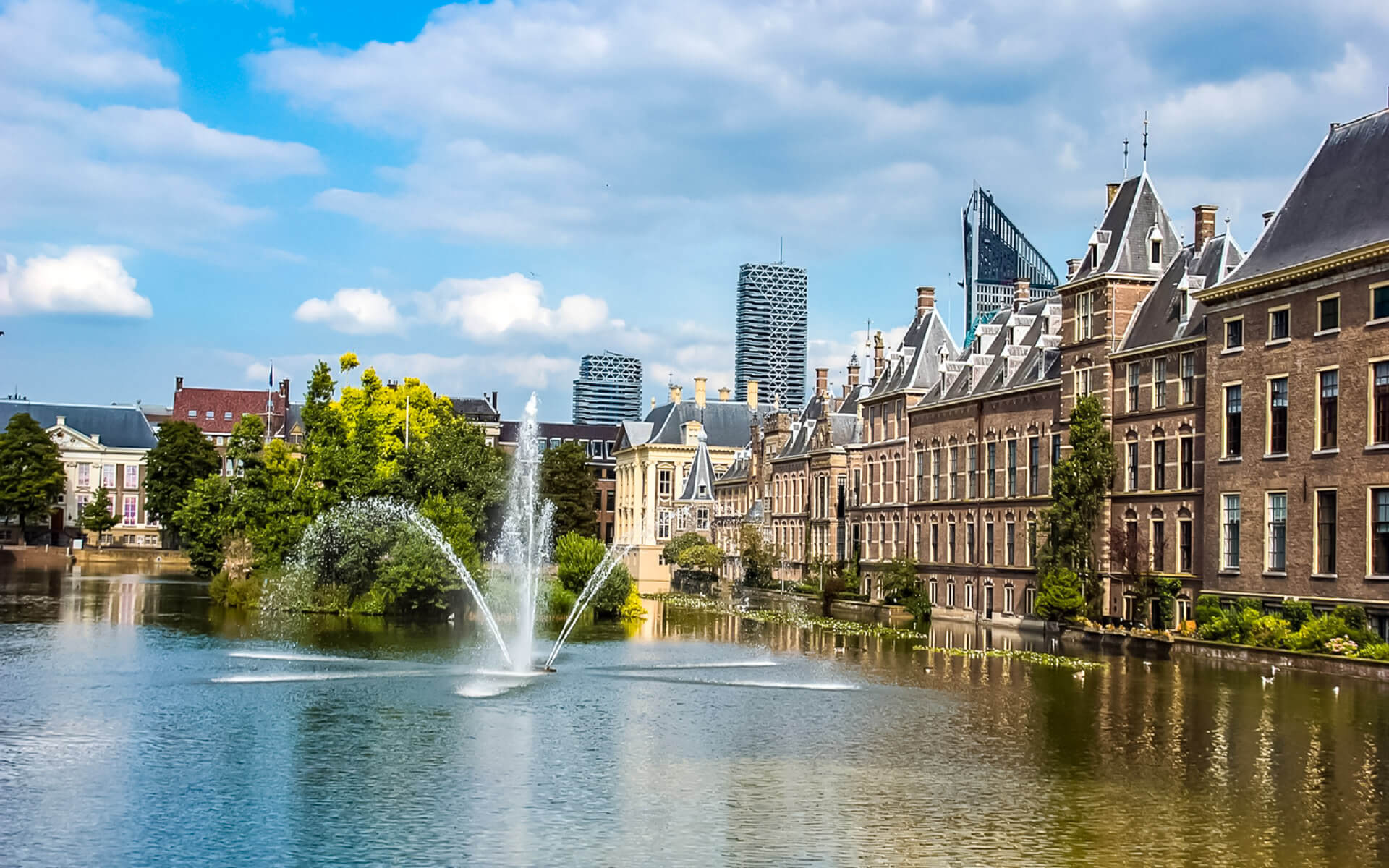 The Hague is the home of the Dutch government and parliament, the Supreme Court, and the Council of State, although it is not the country’s capital, which is Amsterdam. Together with Queen Máxima, King Willem-Alexander of the Netherlands intends to reside in Huis ten Bosch and work at Noordeinde Palace in The Hague. The city is home to the majority of foreign embassies in the Netherlands as well as 150 international organizations, including the International Court of Justice and the International Criminal Court, making The Hague one of the major cities hosting the United Nations, alongside New York, Geneva, Vienna, Rome, and Nairobi.

Tourism in The Hague

Because of the city’s numerous international courts, The Hague is sometimes referred to as the “judicial capital of the world.” Among them are the International Court of Justice, the International Criminal Tribunal for the former Yugoslavia, and the International Criminal Court, which has been in operation since 2004. Aside from these institutions, The Hague is home to over 150 international organizations, as well as several EU institutions, global corporations, and embassies. This gives the city an unique foreign flavor, distinguishing it from Amsterdam. Rather than the numerous foreign tourists and fortune-seekers drawn to Amsterdam by its reputation for excitement and liberalism, The Hague has a greater number of expats working and residing in the city due to the presence of international organizations and corporations. As a result, The Hague has a reputation for being an affluent, conservative, and rather staid city.

The Hague lacks the edginess and energy of Amsterdam, but it provides for its residents in a variety of ways, including significant sections of open space, 11 kilometers of shoreline, beautiful commercial avenues, and a diverse ethnic environment. Rather than canals, like in other Dutch towns, The Hague features streets and avenues that are somewhat broader than the rest of the Netherlands, giving the city a more European character. It contains 18th-century homes in baroque and classicist styles, rather than the usual Dutch Renaissance 17th-century step-gabled buildings. Many see the city as the most stately in the nation. Posh neighborhoods just beyond the city center have a more 19th-century vibe, with eccentric and art nouveau buildings.

However, the farther you go away from the seafront and the city center, the poorer the neighborhoods get. Some see Laan van Meerdervoort, which runs parallel to the coast, as a dividing line between prosperous and sketchier regions. Away from the shore, there is often substantially less green area. One example is Zuiderpark, a centrally placed park that also used to house the stadium of the local football club ADO Den Haag. Some of its followers were recognized as the country’s most infamous hooligans, reinforcing a reputation of “lower-class” residents.

The Hague has beautiful architecture, from the quaint Binnenhof government complex to the magnificent and regal homes on Lange Voorhout. Museums such as the Mauritshuis are regarded as among the finest in the nation. Due to large-scale immigration from this former Dutch colony, The Hague provides some of the greatest Indonesian cuisine in the nation for culinary connoisseurs. The city also provides excellent trip options, such as huge open spaces for walking and biking, as well as dunes and beach leisure sites within a few tram stops from the city center. The Hague also has a few kid-friendly attractions, such as the Madurodam miniature city and the 360-degree Omniversum theater.

The city has seen significant growth in the form of contemporary architectural projects in recent decades. The City Hall and Central Library by American architect Richard Meier, De “Snoeptrommel” (known as Candy-Box by locals) – a round shopping center next to the old town hall, and a collection of post-modern, brick-clad office towers in between the city hall and the Centraal railway station, which provide new housing for a number of ministries, are recent constructions. The building of an underground tram tunnel under Grote Marktstraat, which is utilized by regular trams, as well as a new light-rail system known as RandstadRail, which connects The Hague with the neighboring cities of Zoetermeer and Rotterdam, has been a significant infrastructure development.

A substantial reconstruction project is presently ongoing in the Centraal train station vicinity. Skyscrapers like as the 142-meter-high Hoftoren tower above the city, and numerous additional high-rise structures are now under development.

Climate of The Hague

The Hague has a moderate oceanic climate (Köppen climatic classification Cfb), as does nearly the whole Netherlands. Because of its coastal position, it has warmer winters and cooler summers than more interior locales. It also receives more sunlight.

Geography of The Hague

The Hague is the biggest Dutch city on the North Sea in the Netherlands and the center of the Haaglanden conurbation. Westland and Wateringen are to the south, Delft and the Rotterdam conurbation (known as Stadsregio Rotterdam or Rijnmond) to the southeast, Nootdorp, Pijnacker, Rijswijk, and Voorburg to the east, Zoetermeer and Voorschoten to the northeast, and Wassenaar, Leidschendam-Voorburg, and the Leidenconurbation

In certain cases, the conurbations around The Hague and Rotterdam might be considered a single conurbation. They share, for example, the Rotterdam The Hague Airport and the RandstadRail light rail system. A metropolitan region consisting of Rotterdam and The Hague is being considered. This huge conurbation centered on The Hague and Rotterdam is, in turn, a component of the Randstad – particularly, the South Wing of municipalities (Zuidvleugel). The Randstad region, which encompasses Amsterdam and Utrecht, has a population of 6,659,300 people. The Hague is located in the southwest corner of one of Europe’s greatest metropolitan regions.

Economy of The Hague

The Hague’s economy is based on services. The city’s professional life is dominated by the high number of civil employees and diplomats who work there; as of 2006, the Dutch government or international organizations provided 26 percent of the employment in The Hague. The ministries of Defence, Justice, Housing, Spatial Planning, and the Environment, Foreign Affairs, the Interior, and Transport, Public Works, and Water Management are among the largest employees in this area.

The Hague is home to the headquarters of many big worldwide corporations, notably Royal Dutch Shell, the world’s second largest company by revenue. Aegon, APM Terminals, Damco, KPN, Nationale Nederlanden, ING Investment Management, NIBC Bank, Chicago Bridge & Iron Company, and PostNL are also based in The Hague. Siemens, T-Mobile, AT&T, Huawei, Kuwait Petroleum Corporation, Saudi Aramco, and Total S.A. all have regional headquarters in the city. With the probable exception of the fishing operations of the Scheveningen harbor, there has never been any large-scale industrial activity in The Hague. Many of the city’s logistical and minor-industrial services are concentrated in the Binckhorst neighborhood in the Laak district, which is home to several large warehouses.

Tourism is a significant industry in The Hague. After Amsterdam, the city is the second most popular tourist attraction in the Netherlands. In 2012, the city attracted 1.2 million visitors (an increase of 80,000 over the previous year), with half of them coming from outside the country. The number of hotel stays in The Hague climbed by 5%, with tourists from neighboring nations in particular flocking to the city. Belgians booked 27 percent more hotel nights in 2012 than in 2011, while Germans booked 24 percent more hotel nights and French booked 20 percent more hotel nights. The 14% average rise in visits by international tourists more than balanced by the 1% reduction in visits by Dutch visitors. Tourists spend an estimated €2 billion in the local economy each year. Today, one out of every ten people earns a livelihood from the tourist industry.