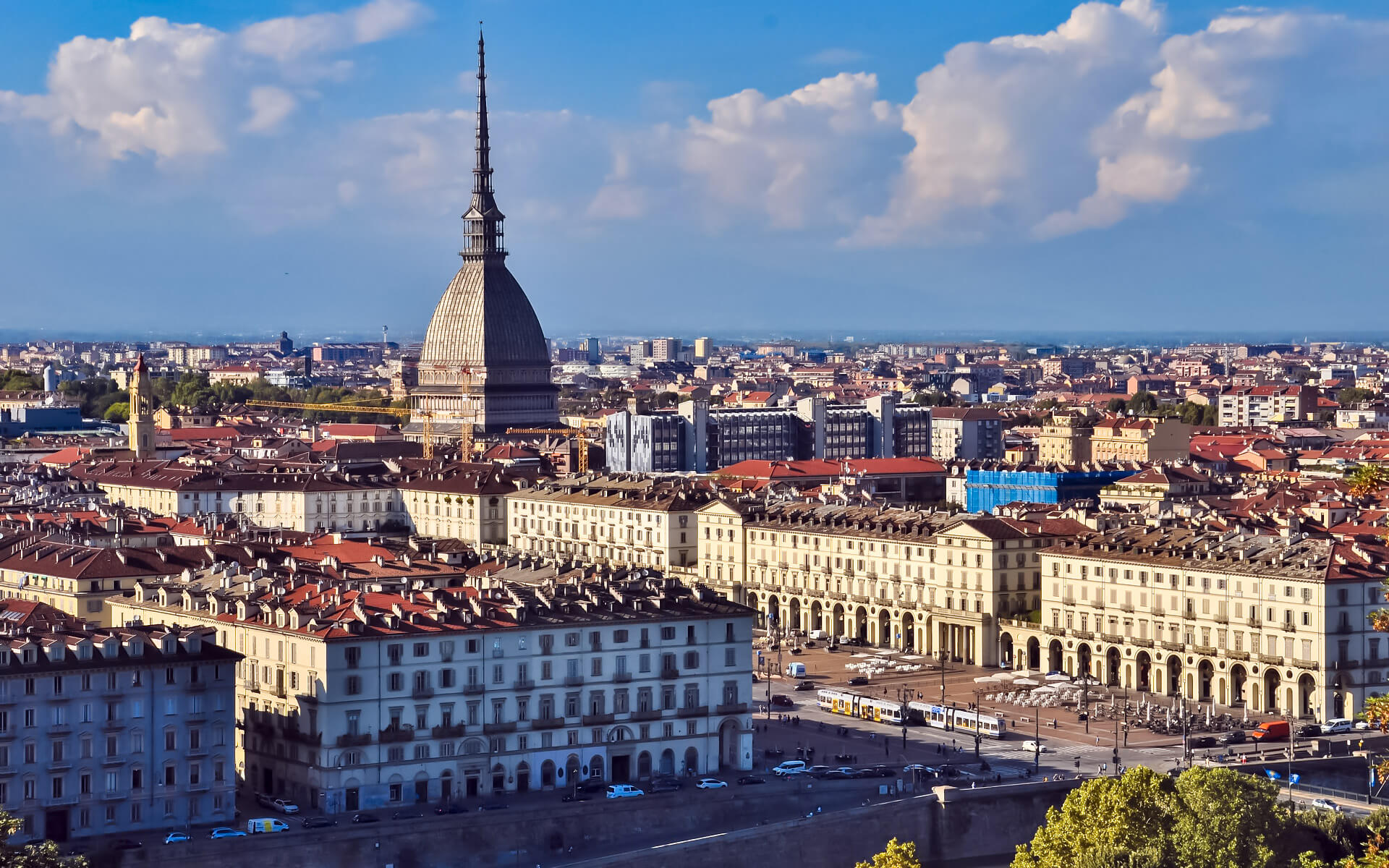 The majority of the city’s public squares, castles, gardens, and elegant palazzi, such as Palazzo Madama, were built between the 16th and 18th centuries, after the capital of the Duchy of Savoy (later Kingdom of Sardinia) was relocated to Turin from Chambery (now in France) as part of the urban expansion.

The city was formerly a prominent European political center, serving as Italy’s first capital city in 1861 and as the residence of Italy’s royal dynasty, the House of Savoy. From 1563, it was the capital of the Duchy of Savoy, then of the Kingdom of Sardinia governed by the Royal House of Savoy, and lastly of the united Italy. Turin is commonly referred to as the “cradle of Italian liberty” since it was the birthplace and home of significant leaders and contributors to the Risorgimento, such as Cavour.

Turin is home to some of Italy’s top universities, colleges, academies, lycea, and gymnasia, including the six-century-old University of Turin and the Turin Polytechnic. The city also has prestigious and renowned museums, such as the Museo Egizio and the Mole Antonelliana. Turin’s many monuments and landmarks place it among the top 250 tourist destinations in the world, and it was the tenth most visited city in Italy in 2008.

Despite the fact that most of its political significance and importance had been lost by World War II, it became a key European crossroads for industry, commerce, and trade, and it is now one of Italy’s primary industrial hubs, as part of the famed “industrial triangle” alongside Milan and Genoa. Turin is Italy’s third-largest economy, after only Milan and Rome. Turin is the world’s 78th wealthiest city by buying power, with a GDP of $58 billion, and was named a Gamma-world city by GaWC in 2010. Turin is also home to a large portion of Italy’s automobile sector.

Turin is well-known for being the home of the Shroud of Turin, the football clubs Juventus F.C. and Torino F.C., the headquarters of car manufacturers FIAT, Lancia, and Alfa Romeo, and the venue for the 2006 Winter Olympics.

Turin (Italian: Torino, Piedmontese: Turin), a significant city of roughly one million people, is located in the Piedmont region of northern Italy, one hour from the French border and somewhat longer from the Mediterranean Sea. It is well-known for being the residence of Italy’s royal family. Turin is a famous tourist destination nowadays, thanks to its excellent, aristocratic ambience, old-world smart stores, majestic boulevards and palaces, lush parks, and various art galleries. The 2006 Winter Olympics, as well as its recent designation as World Book Capital, have inspired people to visit this lovely and underappreciated Italian city with a great cultural and artistic past.

While it is not as well-known as Florence or Rome as a tourist attraction, the location is nice, with the Po River running through the city, the elegant hills above the city and studded with lovely homes, and the Italian Alps in the distance. This is why, according to the famed architect Le Corbusier, Turin is “the city with the most magnificent natural setting in the world.”

Turin is a significant city for technology and industry, and it is home to the FIAT vehicle business. (The letter ‘T’ stands for Torino; F I A T stands for Fabbrica Italiana Automobili Torino, which translates as: Italian Automobile (manu)Factory Turin.) It also gave rise to numerous significant cultural and political movements in Italy.

Turin residents are widely renowned across Italy for their reserved demeanor, and the city reflects this mindset.

Several believe Torino to be the European capital of the Baroque: many palaces and churches were constructed in this style under the Savoia dynasty. It’s not your usual Italian city, with red and yellow buildings; it’s more French, so much so that it’s also known as “the tiny Paris”; broad boulevards with white buildings make the city center more akin to Paris. A crown of churches and castles, some on a hilltop, others hidden in a park, give lots of excellent views throughout the city. Turin has an aristocratic ambiance as well, with affluent 19th century cafés, regal-like arcaded houses, debonair dazzling restaurants, and stately cathedrals dotting the city center.

The Savoy Residences are located in Turin, the former capital of the Kingdom of Sardinia and the Kingdom of Italy. There are various palaces, mansions, and castles in the city center and nearby villages, in addition to the 17th-century Royal Palace erected for Madama Reale Christine Marie of France (the formal house of the Savoys until 1865). Palazzo Chiablese, the Royal Armoury, the Royal Library, Palazzo Madama, Palazzo Carignano, Villa della Regina, and the Valentino Castle are all located in Turin. In 1997, UNESCO designated the complex of the Royal House of Savoy Residences in Turin and the adjacent towns of Rivoli,Moncalieri, Venaria Reale, Agliè,Racconigi, Stupinigi, Pollenzo, and Govone as World Heritage Sites. Turin has been an increasingly popular tourist destination in recent years, ranking 203rd in the world and 10th in Italy in 2008, with over 240,000 foreign tourists.

The Egyptian Museum of Turin specializes on archaeology and ethnography, particularly Egyptian art. It has one of the most extensive collections of Egyptian antiquities outside of Egypt. In 2006, it had over 500,000 visitors. The Museum of Oriental Art is home to one of Italy’s most prominent Asian art collections.

The well-known Shroud of Turin is housed in the city: a linen fabric depicting the figure of a man who seems to have endured physical injuries associated with crucifixion. It is maintained in the royal chapel of Saint John the Baptist Cathedral in the city center. Scientists, theologians, historians, and scholars are still debating the origins of the shroud and its depiction. It is often assumed to be a representation of Jesus Christ, although this is still debatable, since there seems to be a substantial quantity of historical and scientific evidence supporting the concept that it is, or is not, the Holy Face of Jesus. Nonetheless, it is a religious icon as well as one of the city’s key emblems and tourism attractions.

Turin is situated on the boundary between humid subtropical and oceanic climatic zones (Köppen climate classification Cfa/Cfb). This is in contrast to the Mediterranean climate that characterizes the Italian coast.

Winters are pleasant but dry, while summers are scorching in the plains but mild in the highlands. Rain occurs most often in the spring and autumn; otherwise, showers are less frequent but stronger during the warmest months (thunderstorms are frequent). Banks of fog, sometimes quite thick, accumulate on the plains throughout the winter and fall months, although seldom on the city due to its location at the end of the Susa Valley.

Because to the föhn wind impact, its location on the east side of the Alps makes the weather dryer than on the west side.

Turin lies in the northwest corner of Italy. It is bounded on the west and north by the Alps, and on the east by a steep hill that is a natural extension of the Monferrato hills. The Po and three of its tributaries, the Dora Riparia (formerly called as Duria Minor by the Romans, from the Celtic term duria meaning “water”), the Stura di Lanzo, and the Sangone, all run through the city.

Turin is a significant automotive and aerospace center, as well as the home of Fiat (Fabbrica Italiana Automobili Torino; Turin Italian Automobiles Factory), which is part of the Fiat Chrysler Automobiles group, the world’s sixth biggest automotive corporation. According to PricewaterhouseCoopers, the city produced a GDP of $68 billion in 2008, putting it as the world’s 78th wealthiest city by buying power and 16th in Europe. Globalization and World Cities Research Network classified the city as a Gamma level city in 2010.

The city is particularly well-known for its aerospace sector, which includes the companies Alenia Aeronautica, Thales Alenia Space, and Avio. Turin manufactured the International Space Station modules Harmony, Columbus, and Tranquility, as well as the Cupola and all MPLMs. Beyond Ariane 5, the new NGL firm, a joint venture of EADS and Finmeccanica, will oversee future European launcher programmes from Turin (30 percent )

Sousse, often known as Soussa, is the capital of the Sousse Governorate in Tunisia. The city, which is 140 kilometers (87 miles) south of...
Read more

St. Gallen, sometimes known as St. Gall, or Sankt Gallen in German, is the capital of the Swiss canton of St. Gallen. It originated...
Read more

Placencia is a long, narrow peninsula – virtually an island – on Belize’s Caribbean coast. Until recently, the peninsula of Placencia was practically unexplored and...
Read more

Lucerne is a city in central Switzerland, in the country’s German-speaking region. Lucerne is the capital of the canton of Lucerne and part of...
Read more

Santa Clara, about a four-hour drive from Havana, has a significant position in Cuba’s revolutionary history. This city, the capital of the province of...
Read more
Popular destinations

Strange Laws: Bizarre things that are punishable by imprisonment in the United States