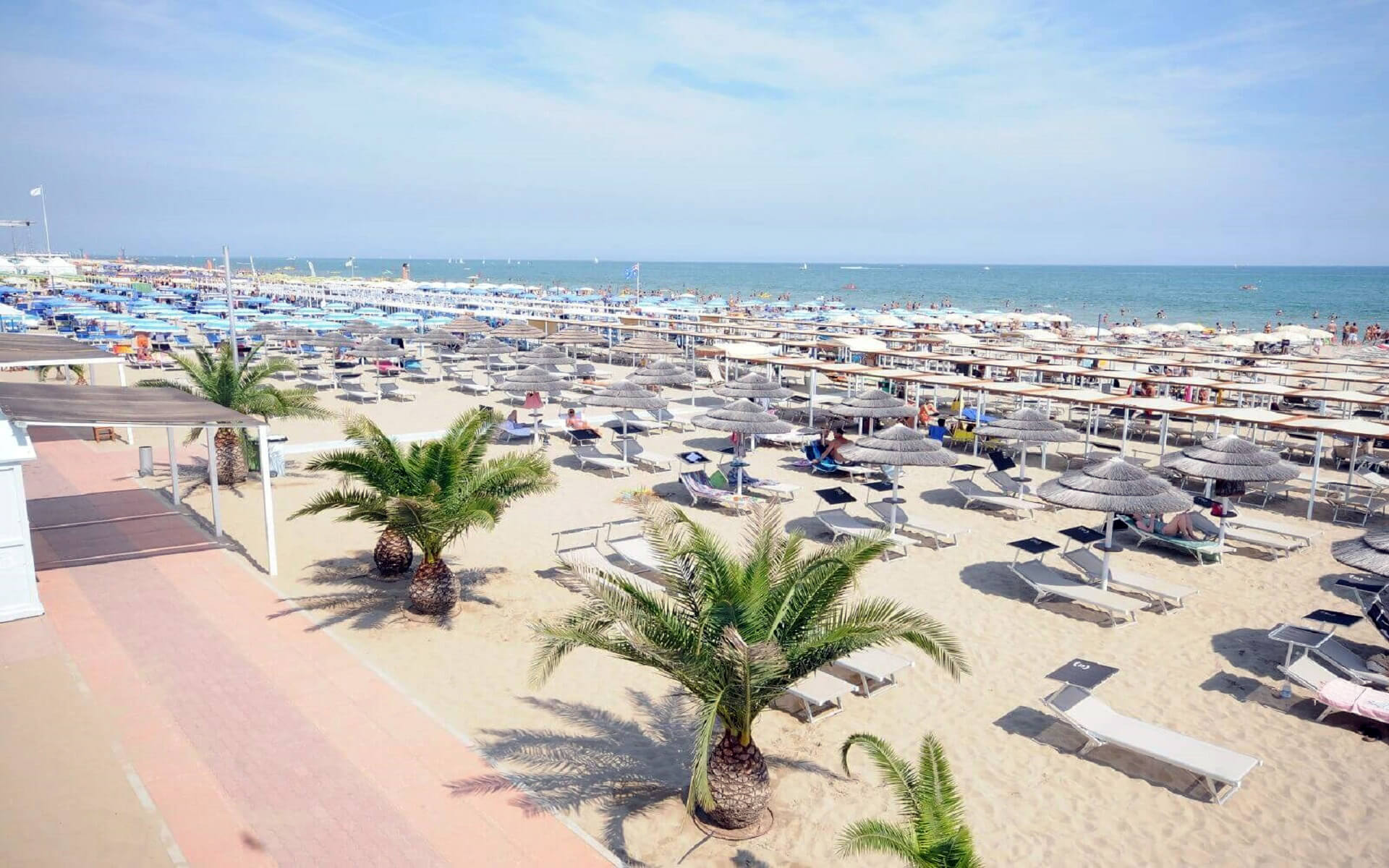 Rimini is the capital city of the Province of Rimini and has a population of 146,606 people. It is located in the Emilia-Romagna region of Italy. It is situated on the shore of the Adriatic Sea, between the rivers Marecchia (the ancient Ariminus) and Ausa (ancient Aprusa). It is one of Europe’s most well-known coastal resorts, due to its 15-kilometer (9-mile) sandy beach, over 1,000 hotels, and dozens of bars, restaurants, and discos. In 1843, the first bathing institution opened. Rimini is an art city featuring historic Roman and Renaissance structures, as well as the hometown of acclaimed film director Federico Fellini.

Rimini was founded by the Romans in 268 BC and served as a key communications link between the north and south of the peninsula throughout their reign, with Roman emperors erecting monuments such as the Arch of Augustus and the Tiberius Bridge on its soil, while during the Renaissance, the city benefited from the court of the House of Malatesta, which hosted artists such as Leonardo and produced works such as the Malatesta Temple. Rimini was one of the most active towns on the revolutionary front in the nineteenth century, housing many of the groups aiming at the unification of Italy. During World War II, the city was the site of fighting and bombardment, as well as a furious partisan resistance that won it a gold medal for civic courage. Finally, in recent years, it has emerged as one of Italy’s most prominent trade show and conference venues.

Rimini is a prominent worldwide tourist attraction and coastal resort, one of the most well-known in Europe and the Mediterranean basin, with a long sandy beach, well-equipped bathing facilities, theme parks, and a variety of leisure and leisure time activities. The city’s economy is completely focused on tourism, which began in the first part of the nineteenth century and grew significantly after World War II.

Rimini’s beginnings as a beach resort can be traced back to 1843, when the first “Bathing Establishment,” the oldest in the Adriatic Sea, was established. The wideness of the beach, the gentle gradient of the sea bed, the equipment of bathing establishments, the luxurious hotels, the mildness of the climate, the richness of curative waters, and the prestigious social events established Rimini as a popular tourist destination among the Italian and European aristocracy.

Because this is a popular destination for Italians (and Russians! ), the cuisine is superb, and the locals are nice and helpful. There aren’t many tour buses full with Americans or English people here! This also means that few people speak anything other than Italian (or Russian), so bring a phrase book with you. Locals will cooperate with you and are always pleased to see a foreigner attempting to communicate in their language.

Rimini has a humid subtropical climate (Köppen: Cfa) that is tempered by the Adriatic Sea, with the greatest autumn and winter mean temperatures and the highest annual low temperatures in Emilia-Romagna. Precipitation is evenly distributed throughout the year, with a peak in October (75 mm) and two minor minimums in January (42 mm) and July (42 mm) (43 mm). Precipitation is mostly delivered by maritime fronts in the spring, autumn, and winter, while thunderstorms from the Apennines or the Po Valley bring it in the summer.

All year, humidity is high, with a low of 72 percent in June and July and a maximum of 84 percent in November and December. Winds are blowing from the west, south, east, and northeast. Southwesterly winds, also known as libeccio or garbino, are foehn winds that may deliver mild temperatures at any time of year. There are approximately 2,040 sunlight hours per year on average.

Rimini is located at 44°03’00” latitude North and 12°34’00” longitude East, along the Adriatic coast, near the south-eastern border of Emilia-Romagna, close to Montefeltro and Marche. Rimini has a land area of 135.71 square kilometers and borders the municipalities of Bellaria-Igea Marina, San Mauro Pascoli, and Santarcangelo di Romagna to the northwest, Verucchio and Serravalle to the southwest, Coriano to the south, and Riccione to the southeast.

Rimini is strategically placed at the extreme southern end of the Po Valley, at the crossroads of Northern and Central Italy. It is flanked to the southwest by the gently rolling hills of Covignano (153 m), Vergiano (81 m), San Martino Monte l’Abbate (57 m), and San Lorenzo in Correggiano (60 m), which are heavily farmed and dominated by old homes. These hills, largely constructed of clay and sand, link the plains formed by the two most significant rivers in Rimini area, the Marecchia and Ausa, to the higher hills of the Apennines.

The Marecchia river travels through its valley and plain in a very extensive riverbed and, after receiving the waters of Ausa, falls into the Adriatic sea via a deviator between San Giuliano Mare and Rivabella, while the old riverbed is utilized as the city’s port in its last stretch. The Marecchia, which was generally low in water, was exposed to catastrophic floods towards its mouth, where the riverbed became narrow after several bends: as a result, it was diverted to the north. Ausa Creek, which had been the eastern edge of Rimini for centuries, was also diverted after WWII, and its old riverbed was covered and made into an urban park.

The coastal strip, built of recent marine deposits, is bounded by a beautiful sandy beach that stretches for 15 kilometers and may be up to 200 meters broad, broken only by the mouths of rivers and gradually dipping towards the sea. A low sandy cliff, formed by sea rise approximately 4000 B.C., is preserved north of Rimini, between Rivabella and Bellaria-Igea Marina, at a distance of around 1,300 meters from the sea. Rimini’s land, due to its geographical location and climatic characteristics, is located on the border between the Mediterranean and the Central European phytoclimatic zones, and hence constitutes a setting of significant naturalistic importance.

Tourism in Rimini began as a therapeutic stay (thalassotherapy, idrotherapy, and heliotherapy), progressing to élite vacation in the late 1800s, middle-class tourist during the fascist era, and eventually mass tourism in the postwar years.

Rimini is home to a quarter of the hotels in Emilia-Romagna, with over 1,000 hotels, 300 of which are open all year, and hundreds more apartment hotels, flats, vacation homes, bed & breakfast, and campings. Tourism is mostly focused on coastal vacations, but it also encompasses trade shows and conferences, events, nightlife, culture, wellness, cuisine and wine, and so forth. Rimini is an important trade fair and conference venue in Italy, having a large trade fair (Rimini Fiera) and a convention center (Palacongressi di Rimini).

The expansion of tourism has had an impact on the city’s other economic sectors, including as services, commerce, and the building industry. Because of the existence of a big wholesale center, two hypermarkets, department stores, supermarkets, and hundreds of shops and boutiques, commerce is one of the most important economic sectors. Sector, which is less established than tourism and services, contains a wide range of businesses involved in the food industry, woodworking machinery, building construction, furnishing, textiles, and publishing. Bimota (motorcycles), SCM (woodworking equipment), and Trevi S.p.A. are notable firms (electronic goods). Rimini is also the location of an ancient railway works factory.

Until the early twentieth century, agriculture and fishing were the city’s primary economic mainstays. Rimini has a long history of wine production (Sangiovese, Trebbiano, Rebola, Pagadebit, and Albana wines) as well as extra virgin olive oil production. Aside from vineyards and olive groves, the most common crops in the area are orchards (peaches, nectarines, apricots, persimmons, apples, pears, cherries, kiwifruits, and plums), vegetables and legumes (lettuce, zucchini, potatoes, tomatoes, beans, green beans, cauliflowers, fennels, strawberries), seminatives (wheat, barley, grain sorghum, corn Rimini’s fishing department, which comprises the coast between Cattolica and Cesenatico, has a fleet of around 100 fishing boats, which is the most consistent of Rimini’s fishing department.

Hvar is a Croatian Adriatic Sea island situated off the Dalmatian coast, between the islands of Bra, Vis, and Korula. The island of Hvar,...
Read more

Dominica, or the Commonwealth of Dominica, is a self-governing island nation. Roseau, the capital, is situated on the island’s leeward side. It is a...
Read more

Ottawa is Canada’s capital. The city is located on the Ontario side of the Ottawa River, just across from Gatineau, Quebec. Ottawa has a...
Read more

Bilbao is a municipality and city in Spain, a significant metropolis in the province of Biscay in the Basque Country autonomous community. With a...
Read more

Portugal, formally the Portuguese Republic, is a nation in Southwestern Europe located on the Iberian Peninsula. It is the westernmost nation on the European...
Read more

Brunei, formally the Nation of Brunei, the Abode of Peace, is a sovereign state in Southeast Asia, situated on the north coast of Borneo....
Read more
Unusual places