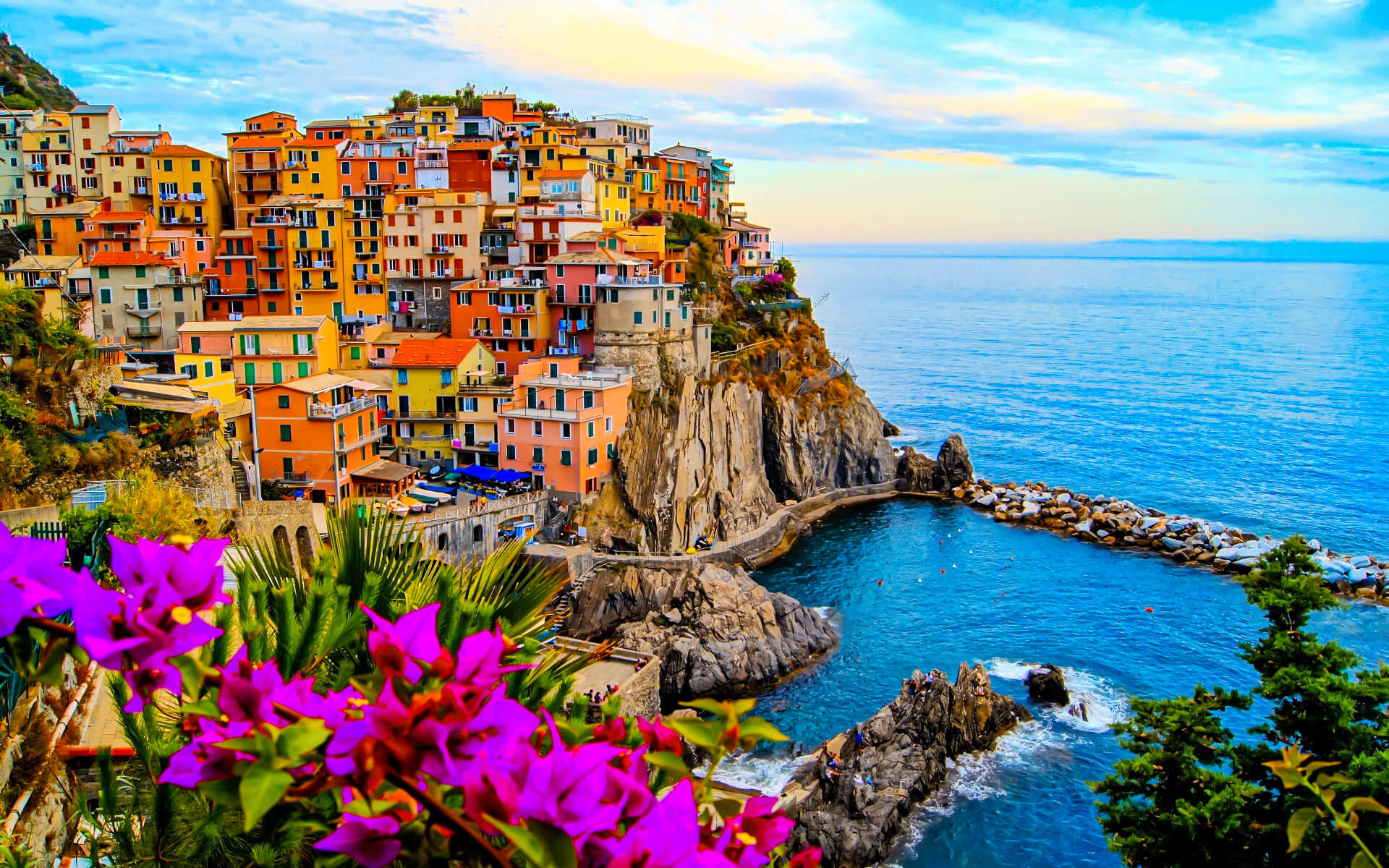 Cinque Terre, which translates to “Five Lands,” is a collection of five tiny coastal towns in the Italian province of Liguria: Riomaggiore, Manarola, Corniglia, Vernazza, and Monterosso. They have been inscribed on the UNESCO World Heritage List.

People have meticulously constructed terraces on the harsh, steep environment for generations, all the way up to the cliffs that overlook the sea. The absence of evident corporate growth contributes to its allure. The communities are connected by paths, railways, and boats, and automobiles cannot access them from the outside.

Except for Corniglia, which is built on top of a large cliff, all of the settlements slope down to sea level. Four of the towns have an old-world feel to them (from north to south: Vernazza, Corniglia, Manarola, Riomaggiore). Monterosso, the northernmost town, is radically different. It’s quite beachy-resorty, with nothing to see beyond the boardwalk apart from contemporary apartment buildings and hotels—nothing like the other towns’ small, crooked alleyways lined with colorful old homes built haphazardly on top of one other.

Riomaggiore is the most southern of the 5 Terre. During the day, bell towers chime, and at night, frogs chirp as tiny boats go night fishing for anchovies and other species, utilizing lights to entice the fish. Riomaggiore also features an antique stone castello, which has received little attention. An information sign outside says that the castello was first mentioned in a document from the mid-500s, which already defined it as “old.” Its quadrangular walls with two circular towers were erected to defend the people from a sea invasion. In 800, the castello was converted into a cemetery, and sections of it were demolished to make way for the new use. It is now one of the monuments of the Cinque Terre National Park. The majority of the activity in Riomaggiore takes place on the main street, Via Colombo, which is lined with cafés, bars, restaurants, and, of course, gelaterie. There are also alimentari stores providing classic Italian cuisine such as fresh fruit (strawberries, cherries, and nespole), salumi (salami, mortadella, and the like), cheeses, olives, and so on. These are fantastic spots to resupply for climbs into the hills, and they’re all not far from a town. Bar & Vini, set on the edge of a mountain above the sea, is a great spot to spend a warm evening. Even late at night, the site was packed with visitors and local families with children.

Manarola is a boat-filled village, at least in the lower section of town. Covered boats of many shapes and sizes line the main roadway, although it’s difficult to pinpoint when they were last seen. Manarola has several great locations to dine and drink. La Cantina Dello Zio Bramante delivers fresh-from-the-sea acciughe (anchovies) with lemon, olive oil, and crusty bread. The first pub seen while walking from Riomaggiore was Aristide Café, which provided the lowest espressi macchiatti (70 cents) (a paved, easy, path that goes by the sea, and takes about 15 minutes or so). Manarola, it turns out, has the greatest gelateria of all the towns: 5 Terre Gelateria e Creperia, on Antonio Discovolo, adjacent to the Farmacia, which is close to the COOP 5 Terre. Manarola also features a small swimming pool. It’s a little cement pier close to some large rocks from which you may wade out into the clear blue seas. It becomes deep quickly, so you can dive from the end of the pier. There are several caverns and coastlines to explore, as well as underwater rocks. There are a couple other swimming holes farther on, accessible from the Blue Trail, not far from the gate that requires the trail pass. There are steps that go all the way down to sea level, as well as a little patio approximately half way down with picnic tables where folks may be seen eating a modest lunch. There are a lot of sharp mussels and barnacles down near the rocks, but the swimming is great here as well, and there aren’t many people.

Corniglia: A stone beach farther down the Blue Trail provides considerably easier access to the ocean as well as more people. The only trail that is not around sea level begins at the Corniglia railway station and ascends to the town. The route winds among lemon trees, vines, lilies, and many types of vegetation, and the air is thick with the aroma of flowers in May.

Corniglia is smaller and quieter than the other towns, yet it is just as charming. Under some yellow umbrellas near the statue of Corniglia himself, Bar Nunzio provides two glasses of local wine with a complimentary dish of local olives. There is a little piazza with a community olive press where you may relax and kill time. There’s also a tower, however it’s not very tall.

Corniglia is only accessible from the railway station by ascending the 365 stairs up the hill (“one for each day of the year”), or by using a bus provided by the Cinque Terre National Park that transports tourists up to Corniglia and back down. If you’re transporting suitcases, this is a necessity. On weekdays, the bus operates from 7 a.m. to 8 p.m., and on weekends, it begins at 8 a.m.

The Blue Trail connects Corniglia to Vernazza, the next town to the north, and is a dirt trail that begins in an olive grove above the village. It continues to ascend, and things get a little steamy and steep at spots, with numerous stone stairs and a few switchbacks. But nothing too tough. The route along the water provides excellent reverse views of Corniglia and Manarola. Vernazza is reached from above, with its two historic towers prominently visible (they close at 19:00). The town itself is a labyrinth of narrow lanes that gradually lead down to the main thoroughfare. Vernazza seems dilapidated at first glance. The paint on the buildings along the shore is flaking off in great parts, but don’t let that deter you. Vernazza is a busy and rowdy neighborhood with a fantastic nightlife, two clock towers, a beach, boats, and a huge public area with umbrellas and tables. The beach has a narrow sandy strip that is not ideal for swimming (there is just a small piece of water roped off for swimming, beyond which are boats and eventually the open sea), but it is safe for children and devoid of sharp bivalves.

You may spend the evening drinking wine along the main street under the railway station, reclining on a quiet bench above town opposite Hotel Gianni viewing the sea, or beside the sea, watching the hilly coastline zigzag in and out, concealing Monterosso.

Monterosso was designed to house a huge number of visitors in spacious, contemporary flats and hotels. It lacks the beauty of the other towns, but it does feature a huge sandy beach with many colorful umbrellas and, of course, beach-side restaurants and cafés. Monterosso’s backstreets are not as intriguing as those of the neighboring towns. A large figure holding a terrace is not to be overlooked near the beach’s end.

Sharm El Sheikh is a city on Egypt’s Red Sea coast, located on the southern point of the Sinai Peninsula in the South Sinai...
Read more

Salamanca is a historic Celtic city in northwest Spain that serves as the seat of the Province of Salamanca in the Castile and León...
Read more

Cambridge is a university city and the county town of Cambridgeshire, England, located 50 miles (80 kilometers) north of London on the River Cam....
Read more

Suriname, formally the Republic of Suriname, is a sovereign state located on South America’s northeastern Atlantic coast. It is bounded on the east by...
Read more