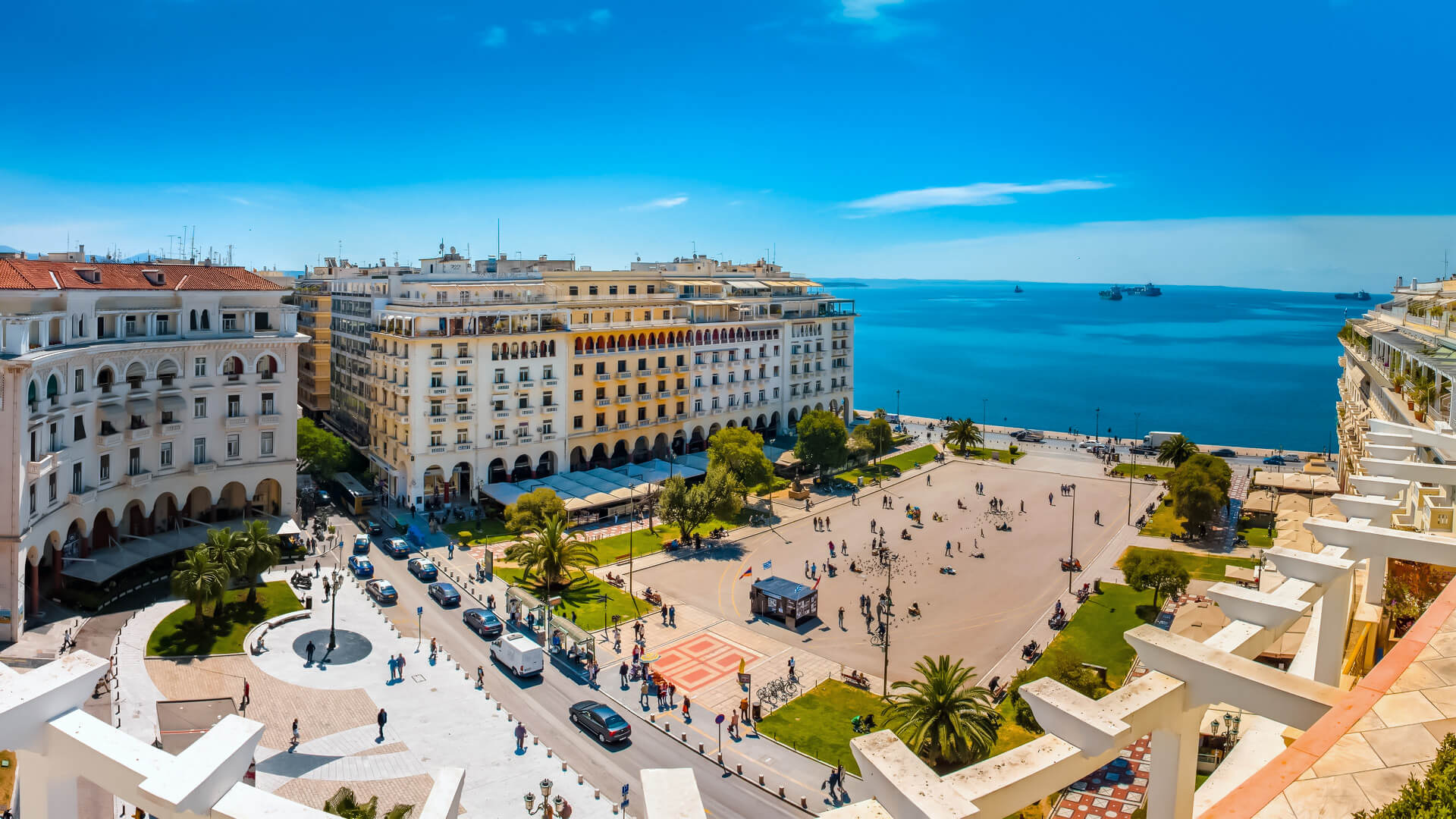 Thessaloniki is the capital of Greek Macedonia, the administrative territory of Central Macedonia, and the Decentralized Administration of Macedonia and Thrace. Its nickname is (Symprotévousa), which means “co-capital,” and refers to its historical role as the (Symvasilévousa) or “co-reigning” city of the Eastern Roman (Byzantine) Empire, alongside Constantinople.

Thessaloniki is Greece’s second most important economic, industrial, commercial, and political center, as well as a key transportation hub for the rest of southeastern Europe; its commercial port is also vital to Greece and the southeastern European hinterland. The city is well-known for its festivals and events, as well as its dynamic cultural life in general, and is regarded as Greece’s cultural capital. Annual events include the Thessaloniki International Trade Fair and the Thessaloniki International Film Festival, and the city also holds the biggest bi-annual gathering of the Greek diaspora. Thessaloniki was named European Youth Capital in 2014.

Cassander of Macedon established the city of Thessaloniki in 315 BC. By the Roman time, Thessaloniki was an important metropolis, the second biggest and richest city in the Byzantine Empire. It was seized by the Ottomans in 1430 and handed up to modern Greece on November 8, 1912.

Numerous noteworthy Byzantine sites may be found in Thessaloniki, including the Paleochristian and Byzantine monuments of Thessaloniki, a UNESCO World Heritage Site, as well as other Roman, Ottoman, and Sephardic Jewish constructions. Aristotle University, the city’s flagship university, is the biggest in Greece and the Balkans.

Thessaloniki is well-known for its bustling laneways and large commerce areas. Tsimiski Street and Proxenou Koromila Avenue are the city’s most well-known retail avenues, as well as two of Greece’s most costly and elite thoroughfares. Makedonia Palace hotel, one of Greece’s most renowned and distinguished hotels, the Hyatt Regency Casino and hotel (the largest casino in Greece and one of the largest in Europe), and Waterland, the largest water park in southeastern Europe are all located in the city.

Because of its huge youthful population and cosmopolitan vibe, the city has long been recognized in Greece for its dynamic city culture, including having the most cafés and bars per capita of any city in Europe, as well as having some of the finest nightlife and entertainment in the nation.

Thessaloniki is not only the cultural and entertainment hub of northern Greece, but also the country’s cultural capital. The city’s main theaters, run by the National Theatre of Northern Greece (Greek: o ), which was founded in 1961, include the Theater of the Society of Macedonian Studies, where the National Theater is based, the Royal Theater (Vasiliko Theatro) – the National Theater’s first base-, Moni Lazariston, and the Earth Theater and Forest Theater, both amphitheatrical open-air theatres overlooking the city.

The city’s proximity to places like Pieria’s national parks and Chalkidiki’s beaches often allows its residents to easily have access to some of Europe’s best outdoor recreation; however, the city is also right next to the Seich Sou forest national park, just 3.5 km (2 mi) away from Thessaloniki’s city center; and offers residents and visitors alike, quiet viewpoints towards the city, mountain bike trails, and landscaped hiking paths. The city’s zoo, run by the municipality of Thessaloniki, is also close to the national park.

A variety of festivals and events are held in Thessaloniki. Thessaloniki International Trade Fair is the most significant event held in the city each year in terms of economic growth. It was founded in 1926 and is held annually in the 180,000 m2 (1,937,503.88 sq ft) Thessaloniki International Exhibition Center. The event draws significant political attention, and it is typical for Greece’s Prime Minister to announce his administration’s objectives for the next year at the event. In 2010, the exhibition drew over 250,000 people. The new Art Thessaloniki, an international contemporary art market, will open its doors for the first time on October 29th – November 1st, 2015. Thessaloniki International Film Festival, founded in 1960, has established itself as one of the most prominent film festivals in Southern Europe, with renowned film makers such as Francis Ford Coppola, Faye Dunaway, Catherine Deneuve, Irene Papas, and Fatih Akn participating.

The climate of Thessaloniki is strongly influenced by the sea on which it is built. Because the city is located in a transitional climatic zone, its climate exhibits traits of multiple climates. According to the Köppen climatic classification, the area has a Mediterranean climate (Csa) that borders on a semi-arid climate (BSk) as well as a humid subtropical climate (Cfa) in the outskirts. Due to the Pindus rain shadow drying the westerly winds, the annual average precipitation is 450 mm (17.7 inches). However, summer precipitation in the city ranges from 20 to 30 mm (0.79 to 1.18 inches), which is high for the typical Mediterranean climate (Csa) and progressively rises towards the north and west, becoming humid subtropical.

Winters are typically dry, with morning frost being prevalent. Snowfalls are intermittent but occur more or less every winter, although snow cover lasts just a few days. Fog is prevalent, with 193 foggy days on average every year. Temperatures may plummet below 10 °C (14 °F) during the harshest winters. The lowest temperature in Thessaloniki was 14 degrees Celsius (7 degrees Fahrenheit). Thessaloniki receives frost (sub-zero temperatures) 32 days out of the year on average. The city’s coldest month is January, with an average 24-hour temperature of 6 °C (43 °F). Wind is also common in the winter months, with an average wind speed of 26 km/h in December and January (16 mph).

Summers in Thessaloniki are hot, with humid evenings. Maximum temperatures often exceed 30 °C (86 °F), but seldom exceed 40 °C (104 °F); the average number of days with temperatures over 32 °C (90 °F) is 32. The highest temperature ever recorded in the city was 42 °C (108 °F). Rain seldom rains in the summer, unless during thunderstorms. Thessaloniki also endures severe heat waves throughout the summer months. July is the warmest month in the city, with an average 24-hour temperature of 26 °C (79 °F). The average wind speed in Thessaloniki in June and July is 20 kilometers per hour (12 mph).

The city of Thessaloniki is located on the eastern coast of Greece, on the northern edge of the Thermaic Gulf, and is bounded on the southeast by Mount Chortiatis. Because of its closeness to formidable mountain ranges, hills, and fault lines, particularly to the southeast, the city has traditionally been prone to geological changes.

During the Roman Empire, Thessaloniki grew to prominence as a significant commercial centre in the Balkans. The Pax Romana and the city’s strategic location facilitated commerce between Rome and Byzantium (later Constantinople and presently Istanbul) through Thessaloniki via the Via Egnatia. The Via Egnatia was also an important communication route between the Roman Empire and the Asian countries, notably in regard to the Silk Road. With the division of the Roman Empire into East (Byzantine) and West, Thessaloniki surpassed New Rome (Constantinople) as the second-largest city in the Eastern Roman Empire in terms of economic strength. Thessaloniki was the greatest port in the Balkans throughout the Empire. The Ottoman Empire captured the city after it fell from Byzantium to the Republic of Venice in 1423. Under Ottoman administration, the city remained the most significant commerce center in the Balkans. Manufacturing, shipping, and commerce were the most significant components of the city’s economy during the Ottoman Empire, and ethnic Greeks controlled the bulk of the city’s trade at the time.

Tobacco (35 percent of all tobacco companies in Greece were headquartered in Thessaloniki in 1946, and 44 percent in 1979) and banking (in Ottoman times, Thessaloniki was a major center for investment from Western Europe, with the Bank of Thessaloniki (French: Banque de Salonique) having a capital of 20 million French francs in 1909) were historically important industries for the economy of Thessaloniki.

There are also free Wi-Fi hotspots in various public locations, including the Thessaloniki International Fair, the park opposite the White Tower, and Aristotelous Square.