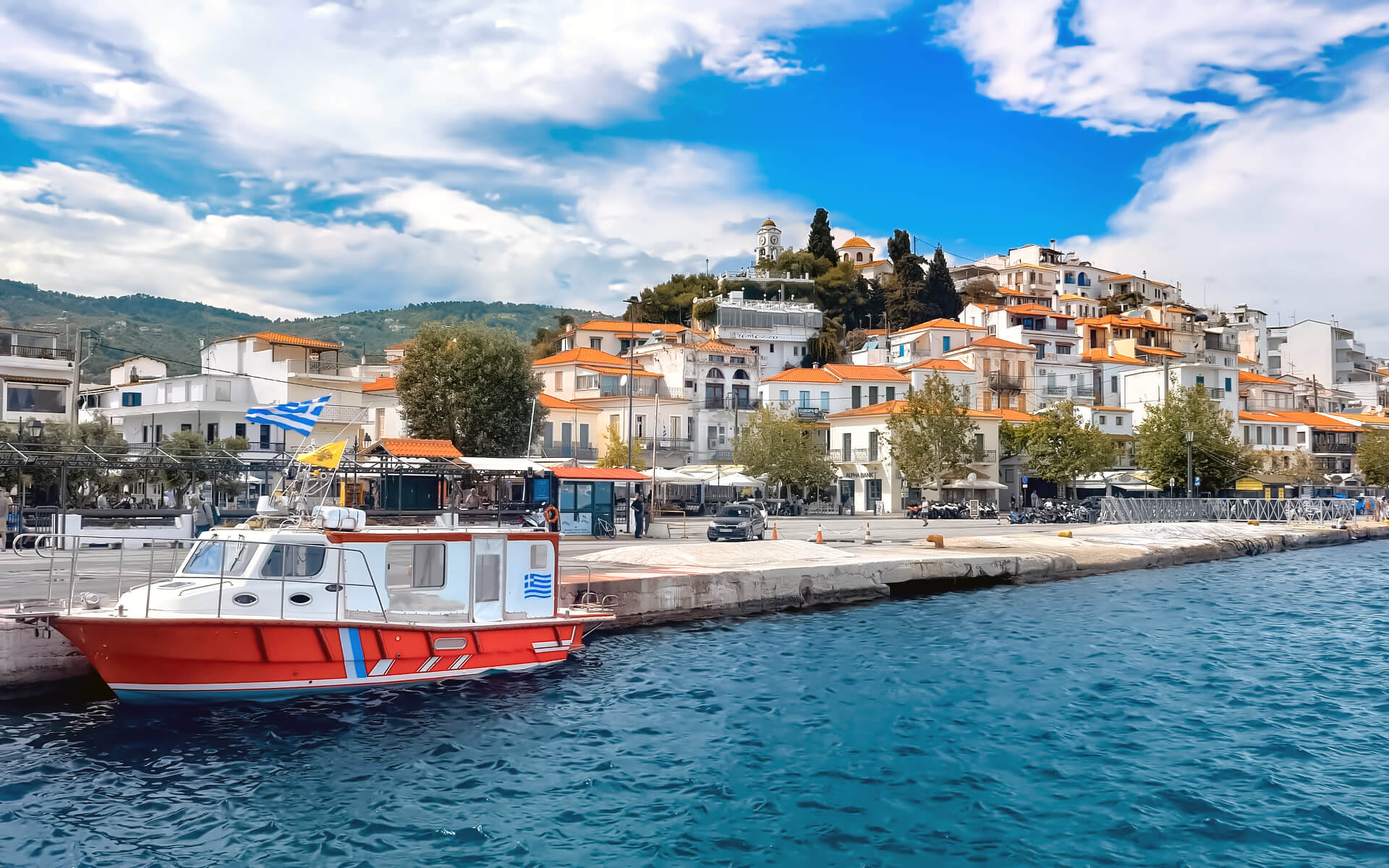 Skiathos (population: 6,088 ) is the major island and access point to the Sporades Islands. Although it is neither the largest nor the most beautiful of the Sporades islands, most visitors do not travel beyond Skiathos since it is the first port of call for most boats and has the only airport.

While it is undeniably the most visited island in the Sporades, it has several faces, so don’t be deceived by the bold cover of this book packed of great Greek secrets. Away from the main road, you’ll discover breathtaking views, small tavernas, and plenty of lush green terrain suitable for moderate strolls or more strenuous climbs.

On Skiathos, there is a village known as “The Village” by the inhabitants, or Skiathos town. It is situated on the east end of the island and is home to the airport, port, a variety of stores and sea fronts, as well as pubs and clubs.

The island extends from north to south and is about 12 kilometers (7 miles) long and 6 kilometers (4 miles) broad on average. Inlets, capes, and peninsulas punctuate the coastline. The southeast and southwest sections feature gentler slopes and are home to the majority of towns and amenities. The topography is more rugged on the north shore, with Mount Karafiltzanaka reaching 433 m (1,421 ft).

Skiathos is made up of the islands of Tsougria, Tsougriaki, Maragos, Arkos, Troulonisi, and Aspronisi. The municipality has a total area of 49.898 km2. They are strewn a few kilometers off the southeast coast and may be seen from the town and beaches. Under exceptionally good weather circumstances, the island of Skopelos is visible from Skiathos, as are the more distant islands of Euboea and Skyros.

The major paved road follows the whole length of the island’s southern coast, with other tiny dirt roads branching off towards the interior and the northern shore. Farmland surrounds all of the island’s main communities.

Skiathos, despite its tiny size, is a popular tourist destination due to its various beaches and forested terrain. It has around 60 beaches, generally sandy, spaced along its 44 km (27 mi) shoreline. Troulos, Vromolimnos, Koukounaries, Asselinos, Megali Ammos, and Mandraki are among them.

Much of the island is forested with Aleppo Pine, with the exception of a tiny Stone Pine forest at the Koukounaries area, which has a lagoon and a popular beach. The island’s woods are concentrated in the southwest and north, however pine trees may be found across the island.