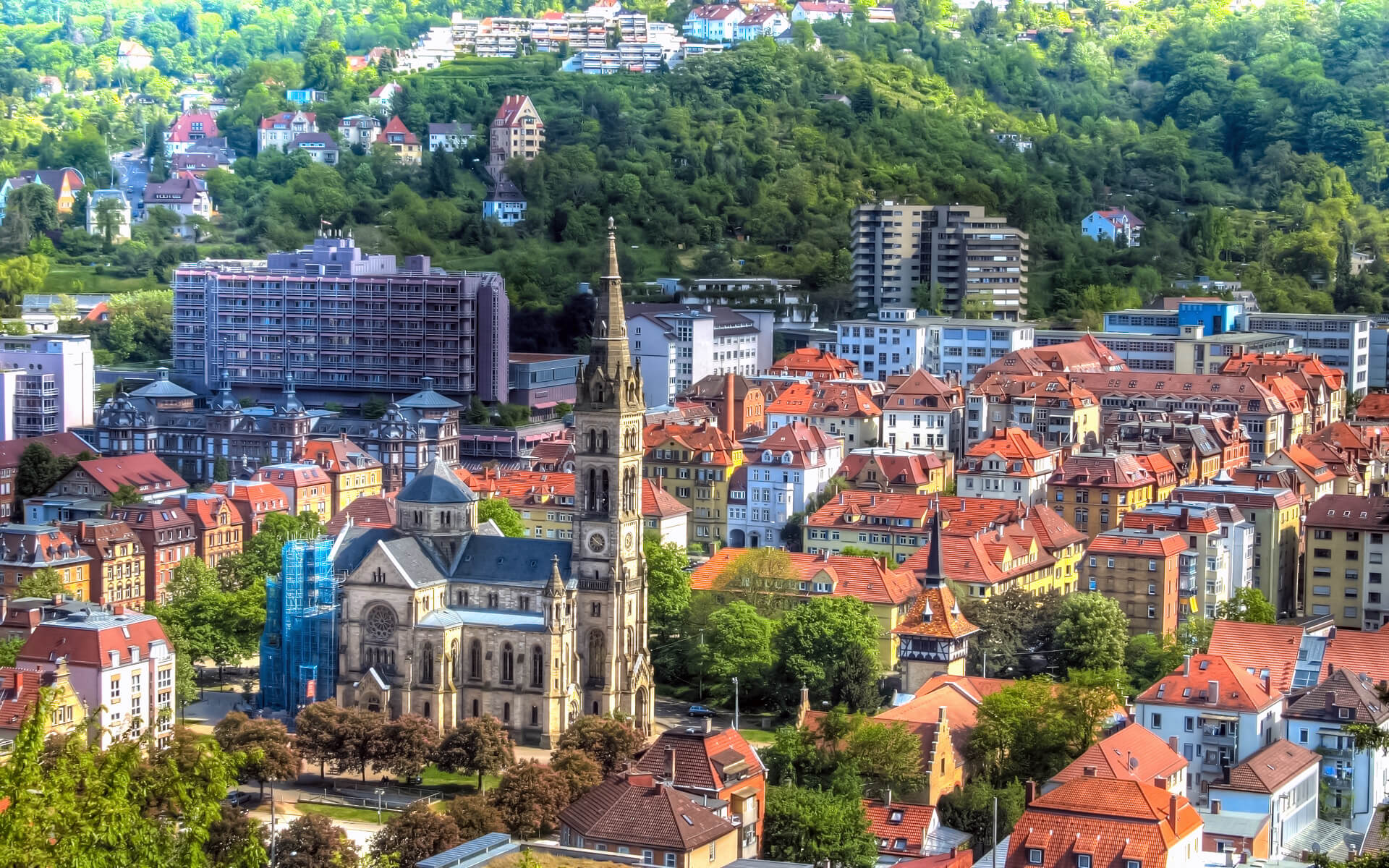 Stuttgart is situated over a range of hills (many of which are vineyards), valleys, and parks, which is unique for a German city and sometimes surprises tourists who link the city with its industrial image as the “cradle of the car.” Stuttgart is a Stadtkreis, which is a form of self-governing urban county. It is also the seat of the Baden-Württemberg State Parliament and State Government, the Evangelical-Lutheran Church in Württemberg, and one of the two co-seats of the Roman Catholic Diocese of Rottenburg-Stuttgart.

Stuttgart was placed 21st in the world in Mercer’s 2015 liveability rankings, and 6th in Germany, behind top-ranked cities such as Frankfurt, Düsseldorf, and Munich. In 2009, the city was rated 11th internationally, second in Germany after Hamburg, and seventh in Europe out of 256 cities for economic and social innovation.

“Stuttgart provides more,” says the city’s tourist motto. In March 2008, the city launched a new logo and tagline, identifying itself as “Das neue Herz Europas,” as part of current ambitions to expand transportation ties to international infrastructure (as part of the Stuttgart 21 project) (“The new heart of Europe”). It bills itself as “Standort Zukunft,” or “Where Business Meets the Future” for business. Stuttgart was advertised to international investors in 2007 as “Germany’s creative powerhouse.” Stuttgart launched a new city logo in July 2010, with the goal of enticing more business people to remain in the city and take holidays in the surrounding region.

Stuttgart is known as the Schwabenmetropole (Swabian metropolis) due to its central position in Swabia and the Swabian dialect spoken by its original residents. The city’s name is pronounced Schtugert or Schtuagerd in that dialect. However, many non-Swabian Germans have immigrated to Stuttgart for economic reasons, and 40 percent of Stuttgart’s citizens, as well as 64 percent of the population under the age of five, are of immigrant origin.

Stuttgart is well-known as a center of mechanical and vehicle engineering, with the headquarters of world-famous companies such as Bosch, Mercedes-Benz, and Porsche located within its metropolitan region. However, it differs from most other industrial centres in that it is a very sparse city scattered over numerous hills and valleys, with woods, parks, and even wineries inside the city.

Stuttgart’s main plaza, Schlossplatz, is located in the city center. In addition to being Stuttgart’s biggest plaza, it is located at the crossroads of the city’s commercial district, Schlossgartenpark, which stretches down to the Neckar River, Stuttgart’s two central castles, important museums, and residential neighborhoods to the south west. Königstraße, Stuttgart’s main commercial boulevard that runs along the northern border of Schlossplatz, claims to be Germany’s longest pedestrianized street.

Despite the fact that the city center was extensively destroyed during WWII, many historic buildings have been repaired, and the city has some great examples of contemporary post-war architecture.

Stuttgart has an oceanic climate with characteristics similar to continental climates. During the summer, the adjacent Black Forest and Swabian Alb hills protect the city from severe weather, although the city may be prone to thunderstorms, and snowfall can continue for several days in the winter. The city core, known as the “Kessel” (kettle) by locals, gets more severe heat in the summer and less snow in the winter than the suburbs. Because it is located in the midst of Europe, the temperature difference between day and night, or summer and winter, may be considerable. Stuttgart has an average of 1807 hours of sunlight every year.

The winter season lasts from December through March. January is the coldest month, with an average temperature of 0 °C (32 °F). Snow cover typically lasts just a few days, however it has been known to last for many weeks at a time as recently as 2010. Summers are hot, with an average temperature of 20 degrees Celsius (68 degrees Fahrenheit) in the warmest months of July and August. Summer season lasts from May through September.

Stuttgart is around an hour’s drive from the Black Forest and about the same distance from the Swabian Jura mountains. The city core is set in a verdant valley between vineyards and dense woods near the Neckar River. As a result, the city is sometimes characterized as being “zwischen Wald und Reben,” or “between woodland and vines.” During the hot summer months, locals refer to this region as the Stuttgart Kessel, or Stuttgart cauldron, because of its hot and humid atmosphere, which is often warmer than the neighboring Württemberg countryside.

Stuttgart has a land area of 207 km2 (80 sq mi). The elevation varies from 207 meters (679 feet) above sea level beside the Neckar river to 549 meters (1,801 feet) atop Bernhartshöhe hill. As a consequence, there are about 400 flights of stairs around the city (known as “Stäffele” in local dialect), totaling roughly 20 kilometres (12 km) of steps. Many date back to the early nineteenth century, when vines dotted the whole valley. Paths and stairs had to be built to cultivate such steep hillsides. Later, as the city expanded and vines were replaced by buildings and streets, the “Stäffele” became footpaths to the newly created neighborhoods. Some of the stairwells were ornately adorned with fountains and landscaping. Wächterstaffel, Eugenstaffel, Sängerstaffel, Buchenhofstaffel, and Sünderstaffel are examples of well-known “Stäffele.” Even now, vines may be found fewer than 500 meters (1,640 feet) from the Main Station.

Stuttgart is well-known for its high-tech industries. Daimler AG, Porsche, Bosch, Celesio, Hewlett-Packard, and IBM are just a few of the corporations with global or European headquarters here.

Stuttgart Trade Fair, Germany’s tenth largest exposition center, is located on the city’s outskirts, near to Stuttgart Airport. Hundreds of SMEs (commonly referred to as Mittelstand) remain in Stuttgart, many of which are still family-owned and have significant linkages to the automotive, electronics, engineering, and high-tech industries.

Stuttgart has the greatest overall level of prosperity of any German city. It has a nominal GDP per capita of €57,100 and a GDP purchasing power parity (PPP) of €55,400. Stuttgart’s total GDP is €33.9 billion, with the service sector accounting for around 65.3 percent, industry accounting for 34.5 percent, and agriculture accounting for 0.2 percent.

Stuttgart is credited with inventing the vehicle and motorbike (by Karl Benz and subsequently industrialised in 1887 by Gottlieb Daimler and Wilhelm Maybach at the Daimler Motoren Gesellschaft). As a consequence, it is regarded as the birthplace of the global automotive industry and is frequently referred to as the “cradle of the vehicle.” Mercedes-Benz and Porsche, as well as automotive components manufacturers Bosch and Mahle, now have their headquarters in Stuttgart. Stuttgart publishes a lot of car enthusiast periodicals.

Deutsche Telekom is the country’s largest telecommunications operator, operating under the brands T-Home (for landline phones), T-Online (for Internet connections), and T-Mobile (for mobile communications). The bright pink “T” emblem quickly identifies everything related to these firms. In German municipalities, there are many “T-Punkt” (literally “T-Point”) stores where you may purchase mobile phones and acquire other information.