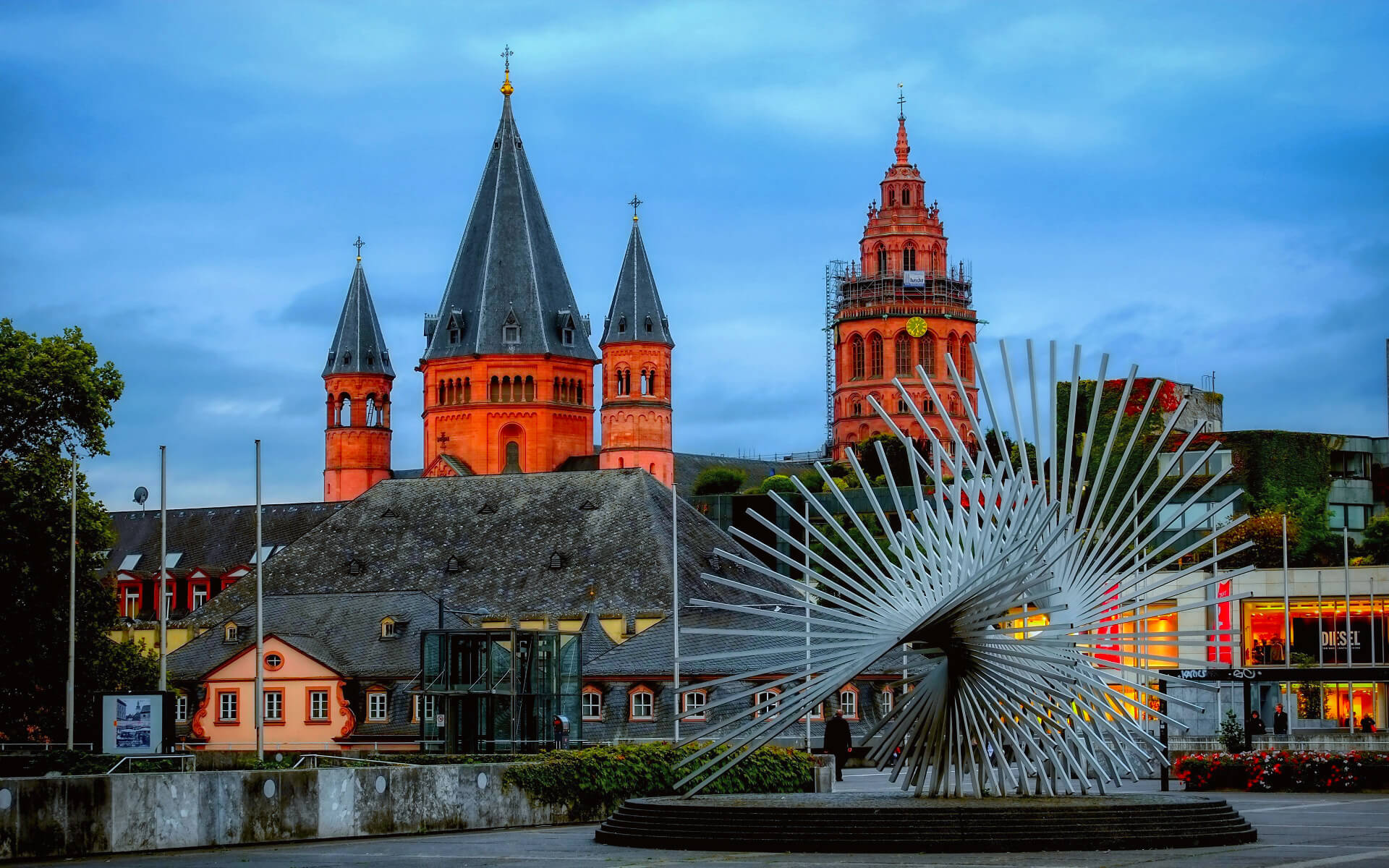 The climate in Mainz is oceanic (Köppen climatic classification Cfb).

Mainz is situated on the 50th latitude, on the west bank of the Rhine, opposite the Main-Rhine confluence. In early 2012, the population was 200,957; an additional 18,619 individuals live elsewhere but have a second home in Mainz. The city is part of the Rhein Metro region, which has a population of 5.8 million people. Mainz can be reached in 25 minutes by commuter train from Frankfurt International Airport (Line S8).

Mainz is a Rhine river port city that links the Rhine and its major tributaries, such as the Neckar, Main, and, later, the Moselle, and thus continental Europe, with the Port of Rotterdam and therefore the North Sea. Mainz’s history and economics are inextricably linked to its proximity to the Rhine river, which has traditionally handled the majority of the region’s waterborne commerce. Today’s massive container port hub, which allows for trimodal transportation, is situated on the town’s North Side. Another benefit of the river is that it moderates Mainz’s temperature, making riverfront districts somewhat warmer in the winter and cooler in the summer.

Sand dunes were created in the Rhine valley during the last ice age, forming the city’s western outskirts. The Mainz Sand Dunes area is currently a wildlife reserve with a one-of-a-kind scenery and raresteppe vegetation for this region.

The houses along the Rhine River stood for the civic settlement of the modern city when the Mainz legion camp was formed in 13/12 BC. Historical sources and archaeological discoveries both demonstrate the military and civilian significance of Mogontiacum as a Rhine port city.

As a wine trade hub and the site of the state’s wine minister, Mainz is one of the German wine economy’s focal points. Rhineland-Palatinate is the only state with such a department due to the significance and history of the wine business for the federal state.

The city has also been a member of the Great Wine Capitals Global Network (GWC) since 2008, an alliance of well-known wineculture-cities throughout the globe. Many wine merchants are also employed in the town. Kupferberg, a sparkling wine maker based in Mainz-Hechtsheim, and Henkell, which is currently based on the opposite side of the Rhine, were both started in Mainz. The famed Blue Nun, one of the earliest branded wines, was promoted by the Sichel family.

Mainz has been a wine producing location since Roman times, and the tourism center promotes the image of Mainz as a wine town. The Haus des Deutschen Weines (English: House of German Wine) is just next to the theater. The German Wine Academy, the German Wine Institute (DWI), and the German Wine Fund are all based there (DWF). The Mainzer Weinmarkt (wine market) is one of Germany’s most important wine fairs.