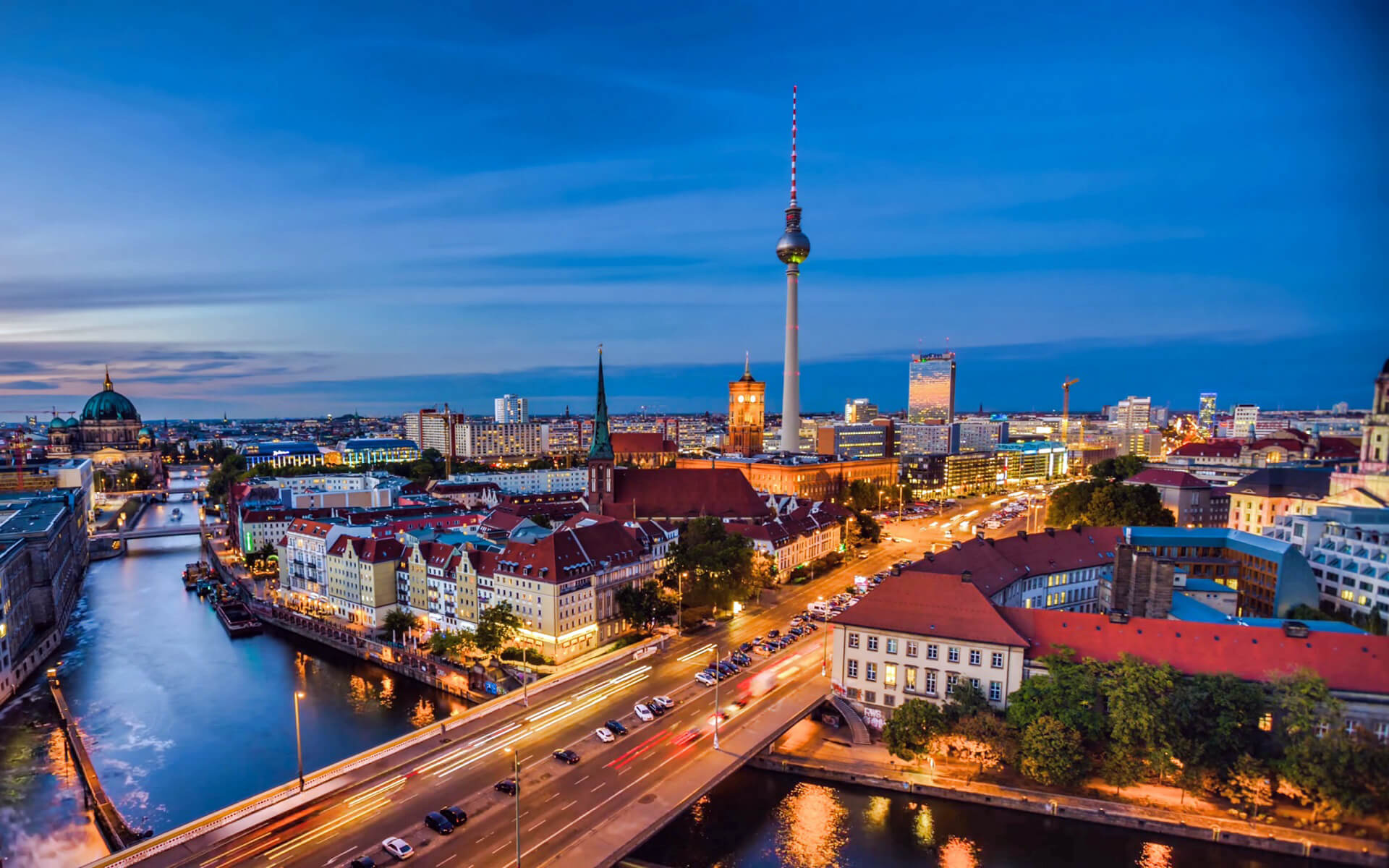 Berlin is the capital of Germany and one of the country’s 16 states. It is the second most populous city proper and the seventh most populated urban area in the European Union, with a population of 3.5 million people. It is the center of the Berlin-Brandenburg Metropolitan Region, which includes around six million citizens from over 180 countries. It is located in northeastern Germany on the banks of the rivers Spree and Havel.

Berlin has a mild seasonal climate due to its position in the European Plain. Forests, parks, gardens, rivers, and lakes cover around one-third of the city’s land area.

Berlin was founded in the 13th century and became the capital of the Margraviate of Brandenburg (1417–1701), the Kingdom of Prussia (1701–1918), the German Empire (1871–1918), the Weimar Republic (1919–1933), and the Third Reich (1933–1945). In the 1920s, Berlin was the world’s third biggest municipality. Following WWII, the city was split; East Berlin became the capital of East Germany, while West Berlin became a de facto West German exclave encircled by the Berlin Wall (1961–1989) and East German territory. Following German reunification in 1990, Berlin was proclaimed as the capital of a united Germany once again.

Berlin is a global cultural, political, media, and scientific center. Its economy is built on high-tech companies and the service sector, which includes a wide variety of creative industries, research institutes, media businesses, and convention sites. The city is a major tourist attraction. IT, pharmaceuticals, biomedical engineering, clean tech, biotechnology, construction, and electronics are additional important sectors.

Modern Berlin is home to world-class colleges, orchestras, museums, and entertainment facilities, as well as many athletic events. Because of its metropolitan surroundings, it has become a popular site for international film productions. The city is well-known for its festivals, unique architecture, nightlife, modern arts, and good living standards. Berlin has witnessed the rise of a multicultural business sector during the previous decade.

Berlin is well recognized for its historical connections as Germany’s capital, internationalism and tolerance, a vibrant nightlife, countless cafés, clubs, and pubs, street art, and several museums, palaces, and other historic buildings. The architecture in Berlin is fairly diverse. Despite being seriously devastated in the last years of World War II and divided apart throughout the Cold War, Berlin has considerably rebuilt itself, particularly with the reunification effort after the fall of the Berlin Wall in 1989. Within the city center, it is now possible to observe representations of many distinct historical eras in a short amount of time, ranging from a few remaining medieval buildings near Alexanderplatz to the ultramodern glass and steel constructions at Potsdamer Platz. Berlin has several diverse neighborhoods as a result of its turbulent past. And, because of its long history as a cosmopolitan capital (first of Prussia, then of Germany), it has drawn immigrants from all over the globe for more than three centuries, and many of them have left and continue to leave an unique stamp on the city.

In the previous 10 years, tourism has more than quadrupled, and Berlin has risen to become Europe’s third most-visited city. Germany, the United Kingdom, the Netherlands, Italy, Spain, and the United States have the most visitors.

Berlin is one of the world’s top three conference cities. The Messe Berlin is the city’s primary convention organizer. Its primary display space is more than 160,000 square meters in size. Several large-scale trade fairs, including the consumer electronics trade fair IFA, the ILA Berlin Air Show, the Berlin Fashion Week (including the Bread and Butter tradeshow), the Green Week, the transport fair InnoTrans, the tourism fair ITB, and the adult entertainment and erotica fair Venus, are held in the city each year, attracting a large number of business visitors.

Berlin is a wonderful city, at least in many places, therefore plan ahead of time to explore the sites. A good map is strongly recommended. While the public transportation system is excellent, it may be perplexing to tourists owing to a lack of directional signage at some of the bigger stations, therefore a good transit map is also recommended. Take note of the last station/stop of the S-bahn or U-bahn, since that is often how the direction of travel is indicated. Roads entering Berlin may sometimes be perplexing, so plan your journey carefully. Signs indicate to city boroughs or districts rather than compass directions, therefore it’s a good idea to learn where the different boroughs or districts are in relation to one another. This is also true for bikers.

The Tourist Information Office in Berlin is a fantastic resource for learning more about the city, with a plethora of practical information and valuable backlinks.

Berlin has a mild maritime climate.

Because of its inland location, the mild continental climate has a substantial effect, with frosts prevalent in January and bigger temperature changes between seasons than is normal for many marine climates.

In general, spring and fall are cool to moderate. The built-up region of Berlin generates a microclimate, with heat trapped in the city’s buildings. Temperatures in the city might be 4 °C (7 °F) higher than in the surrounding regions.

Berlin is located in northeastern Germany, in a region of low-lying marshy forests with mostly flat terrain, part of the huge Northern European Plain that spans from northern France to western Russia. Meltwater pouring from ice sheets at the end of the last Weichselian glacier produced the Berliner Urstromtal (an ice age glacial valley) between the low Barnim Plateau to the north and the Teltow Plateau to the south. The Spree is presently following this valley. The Spree empties into the Havel, which runs from north to south through western Berlin, near Spandau, a borough in the west of Berlin. The Havel’s route is more akin to a series of lakes, the greatest of which are the Tegeler See and the Großer Wannsee. A number of lakes feed into the upper Spree, which runs through the Großer Müggelsee in eastern Berlin.

Significant portions of modern-day Berlin stretch into the low plateaus on both sides of the Spree Valley. The Barnim Plateau encompasses large portions of the municipalities of Reinickendorf and Pankow, while the Teltow Plateau encompasses the majority of the boroughs of Charlottenburg-Wilmersdorf, Steglitz-Zehlendorf, Tempelhof-Schöneberg, and Neukölln.

Spandau is located partially inside the Berlin Glacial Valley and partly on the Nauen Plain, which spans west of Berlin. Since 2015, the highest point in Berlin has been located on the Arkenberge hills near Pankow, at 122 meters (400 ft). They exceeded Teufelsberg (120.1 m), a hill formed of rubble from the Second World War ruins, by dumping construction detritus. The Müggelberge has the greatest natural elevation at 114.7 m, while the Spektesee near Spandau has the lowest at 28.1 m. (92 ft).

The city benefits economically from research and development. The metropolitan area is one of the top three inventive places in the EU. The Science and Business Park in Adlershof is Germany’s biggest technological park in terms of income. Berlin has emerged as a hub for corporate relocation and foreign investment inside the Eurozone.

There are internet cafés and phone stores all across Berlin. Do some research with the phone stores since most of them have a specialty area in the globe. Many clubs, restaurants, and cafés provide free wi-fi to their customers. Einstein Coffee provides all customers with 30 minutes of free internet.

The whole city is covered by the mobile network (3G/GPRS/GSM). If you are traveling from a non-GSM nation (for example, the United States), make sure your phone is GSM compatible. Nota bene: The GSM iPhone, which is compatible with AT&T and T-Mobile in the United States, works flawlessly in Berlin.

A free wifi network covers portions of Berlin, however it requires the installation of specific software on your computer. More information, including coverage maps of Berlin, is accessible online.