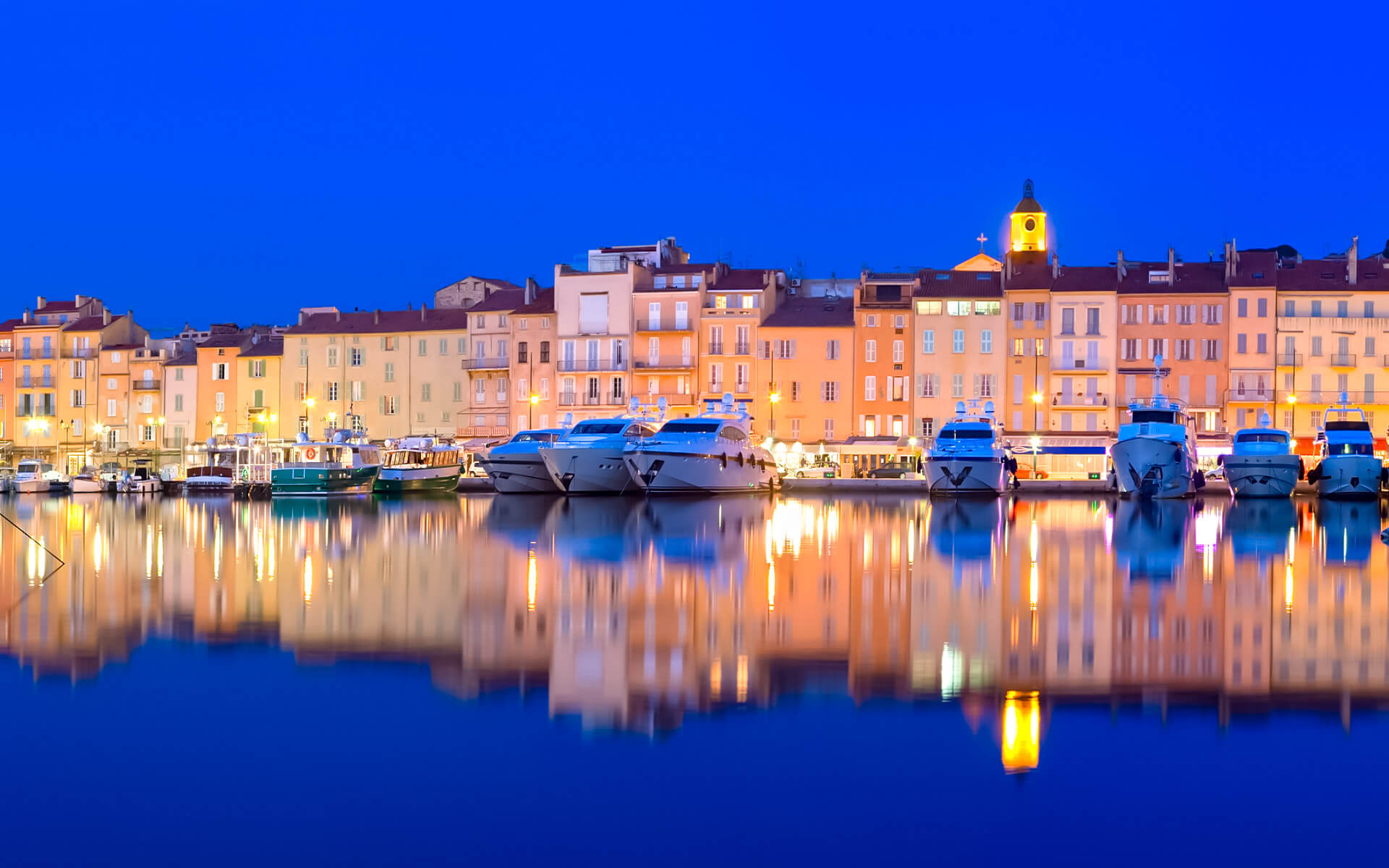 Saint-Tropez is a town in the Var department in the Provence-Alpes-Côte d’Azur region of southeastern France, 100 kilometers (62 miles) west of Nice. It is also the largest city in the canton of Saint-Tropez.

Saint-Tropez is a resort town on the French Riviera. Until the turn of the century, it was a military fortress and a sleepy fishing community. During World War II, it was the first town on this coast to be freed (as part of Operation Dragoon). It became an internationally recognized beach resort after the war, owing mostly to the inflow of artists from the French New Wave in film and the Yé-yé movement in music. It eventually became a destination for the European and American jet set, as well as visitors seeking Provençal authenticity and the odd celebrity sighting.

Tropéziens are the residents of Saint-Tropez, and the town is known colloquially as St-Trop.

Tropez beaches may be found along the coast in the Baie de Pampelonne, which is situated south of Saint-Tropez and east of Ramatuelle. Pampelonne has a number of beaches along its five-kilometer coastline. Each beach is about thirty metres wide and has its own beach house as well as a private or public sunbathing space.

Many beaches hire windsurfing, sailing, and canoeing equipment, while others rent motorized water activities such as power boats, jet skis, and water skiing, as well as scuba diving. Some of the private beaches cater to naturists.

Rudi Gernreich, an Austrian-American fashion designer, debuted the monokini, a topless swimsuit that sparked outrage in the United States and across the world, in June 1964. During Gernrich’s childhood, several Austrians encouraged naked exercise, which inspired him to create this fashion trend. The Vatican condemned the swimsuit, and the “industrial-erotic adventure” of the topless swimming suit “negates moral sensibility,” according to L’Osservatore Romano. The church issued a warning against the topless vogue in Italy and Spain. The mayor of Saint-Tropez instructed police to prohibit toplessness and to keep a helicopter hovering above the beach.

The monokini inspired the sexual revolution in the 1960s by stressing a woman’s personal freedom of clothing, even if her outfit was provocative and displayed more flesh than had been the standard in the more conservative 1950s. The style, quickly nicknamed a “topless swimsuit,” was never popular in the United States, however the topic of permitting both women equal exposure above the waist has been highlighted as a feminist problem on occasion. Tahiti beach, popularized in the film And God Created Woman starring Brigitte Bardot, evolved as a clothing-optional resort near Saint Tropez. The “clothing wars” between the gendarmerie and nudists were the focus of the classic French comedy film series Le gendarme de Saint-Tropez (The Troops of St. Tropez), starring Louis de Funès, but in the end, the nudists won. From Pampelonne beaches to yachts in the heart of Saint-Tropez harbor, topless sunbathing is now the standard for both men and women. The Tahiti beach is now clothes optional, however nudists often visit private nudist beaches, such as Cap d’Agde.

During the 18th century, the port was heavily frequented; in 1789, it was visited by 80 ships. Tartanes and three-masted ships carrying 1,000 to 12,200 barrels were constructed at Saint-Tropez shipyards. The town was home to a number of related industries, including fishing, cork, wine, and timber. The town had a hydrography school. The floret of the merchant marine, dubbed “The Queen of the Angels” (a three-masted ship with a capacity of 740 barrels), visited the port in 1860.

Its importance as a commercial port has dwindled, and it is now mostly a tourist destination and a location for numerous well-known sail regattas. Les Bateaux Verts provides swift boat transportation to Sainte-Maxime on the opposite side of the bay, as well as Port Grimaud, Marines de Cogolin, Les Issambres, and St-Aygulf.

Les Bravades de Saint-Tropez is an annual ceremony celebrated in the middle of May to honor the town’s patron saint, Torpes of Pisa, as well as their military successes. It is one of Provence’s oldest traditions, dating back more than 450 years, when the residents of St Tropez were granted special permission to establish a militia to safeguard the town against Barbary pirates. Throughout the three-day festival, numerous militias dressed in period costumes fire muskets into the air at customary points, march to the sound of bands, and display St Torpes’ bust. The locals also attend a liturgy dressed in traditional Provençal attire.

Every year, around the end of September, a regatta is conducted at Saint-Tropez Bay (Les Voiles de Saint-Tropez). This is an attraction for numerous yachts, some of which are up to 50 meters long. Many travelers visit the area for this festival or as a pit stop on their way to Cannes, Marseille, or Nice.

Saint-Tropez has a hot-summer mediterranean climate, with mild winters and scorching summers, however its coastline location helps to mitigate daytime temperatures.

Tourism is primary Saint-Tropez’s economic resource. The city is widely known for the Hôtel Byblos and Les Caves du Roy, both of which are members of the Leading Hotels of the World, and whose opening with Brigitte Bardot and Gunter Sachs in 1967 was a global event.