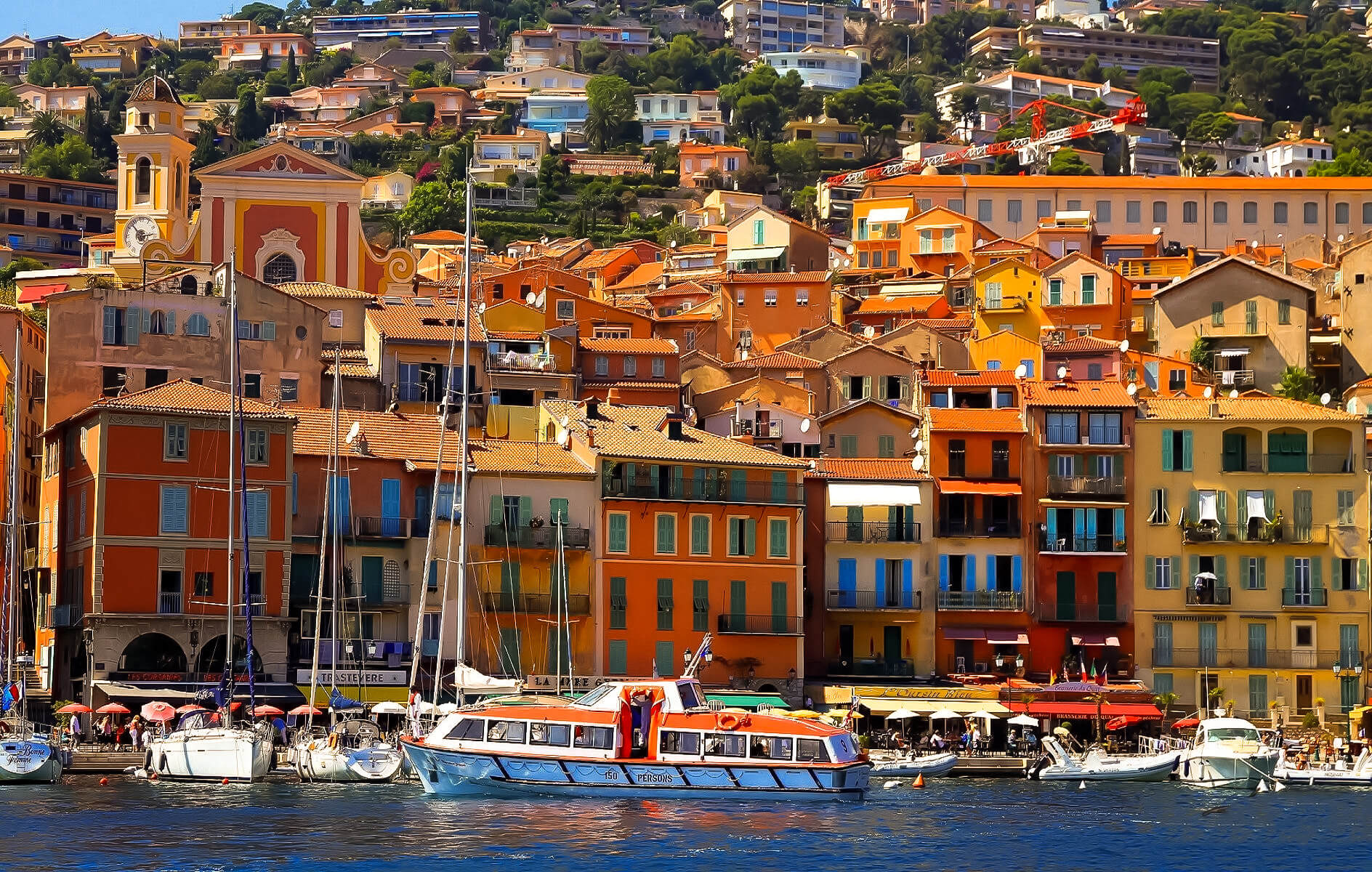 Nice is the fifth most populated city in France and the administrative center of the département of Alpes Maritimes. Nice’s urban area extends beyond the official city borders, with a population of around one million people living over an area of 721 km2 (278 sq mi). Nice is the second-largest French city on the Mediterranean coast and the second-largest city in the Provence-Alpes-Côte d’Azur region after Marseille, and is located on the Côte d’Azur on the south east coast of France on the Mediterranean Sea. Nice lies about 13 kilometers (8 miles) from the principality of Monaco, and its airport serves as a gateway to the principality.

Nice la Belle (Nissa La Bella in Niçard), which meaning Nice the Beautiful, is also the title of the city’s unofficial song, penned by Menica Rondelly in 1912.

Terra Amata, an archaeological site in today’s Nice, includes evidence of a very early usage of fire. Around 350 BC, Greeks from Marseille established a permanent town and named it Nikaia after the goddess of victory, Nike. The town has changed hands several times throughout the centuries. Its strategic position and port contributed considerably to its nautical strength. It was a dominion of Savoy for centuries until being a part of France between 1792 and 1815, when it was restored to Piedmont-Sardinia until its reannexation by France in 1860.

The natural beauty of the Nice region, as well as its moderate Mediterranean temperature, attracted the interest of the English upper classes in the second half of the 18th century, when a growing number of aristocratic families began to spend their winters there. The Promenade des Anglais (“Walkway of the English”), the city’s major beachfront promenade, gets its name from tourists to the resort. For decades, the lovely Nicean environs have drawn not just those looking for pleasure, but also those looking for inspiration. Some of Western culture’s most famous artists, including Marc Chagall, Henri Matisse, Niki de Saint Phalle, and Arman, have been drawn to the area’s pure air and gentle light. Many of the city’s museums, notably the Musée Marc Chagall, Musée Matisse, and Musée des Beaux-Arts, honor their work. Nice has the country’s second highest hotel capacity and is one of its most visited cities, getting 4 million visitors each year. It also hosts France’s third busiest airport, behind the two major Paris airports. It is the historical capital of the Nice County (Comté de Nice).

Nice is the second most popular French city after Paris among visitors, which, coupled with the challenges of long-distance land travel (due in part to the Alps), enables it to boast the third busiest airport in France in terms of passenger counts (close to 10,000,000 passengers in 2005). It is readily accessible, taking less than 6 hours by rail from Paris, and the airport is just minutes away from the city.

The Palais des Congrès Acropolis is Nice’s only conference center. There are also various business parks in the city, notably l’Arenas, Nice the Plain, Nice Méridia, Saint Isidore, and the Northern Forum.

Furthermore, Nicetoile, Nice TNL, Nice Lingostière, Northern Forum, St-Isidore, the Trinity (around the Auchan hypermarket), and Cap3000 in Saint-Laurent-du-Var are among the city’s commercial centers.

The Promenade des Anglais (“Promenade of the English”) is a promenade in Nice that runs along the Baie des Anges (“Bay of the Angels”), a Mediterranean bay. Prior to urbanization, Nice’s coastline was only bounded by a barren strip of beach covered with huge stones. The original residences were built on higher ground, far from the sea, since affluent visitors visiting Nice in the 18th century came for the mild winter weather, not the beach. Nice’s dockworkers and fisherman lived in the regions around the ocean.

Many rich English individuals spent the winter at Nice in the second half of the 18th century, admiring the scenery along the coast. When a particularly hard winter in the north brought a swarm of beggars to Nice, several wealthy Englishmen offered a good project for them: the building of a promenade (walkway) along the sea.

The idea of a nice promenade piqued the interest of the city of Nice, which substantially expanded the scope of the project. The Niçois dubbed the Promenade the Camin dei Anglès (the English Way) in their own tongue, Nissart. Following France’s capture of Nice in 1860, it was renamed La Promenade des Anglais, replacing the previous Nissart name with its French counterpart.

The Promenade des Anglais Hotel Negresco was named after Henri Negresco (1868–1920), who had the opulent hotel built in 1912. When the Negresco originally opened in 1913, it followed the traditions of the time by opening on the side facing the Mediterranean.

Another location worth noting is the little street next to the Promenade des Anglais, which leads from Nice’s center, commencing at Place Masséna and going parallel to the promenade in the direction of the airport for approximately 4 blocks. This area of town is known as the “Zone Pietonne,” or “Pedestrian Zone.” Cars are not permitted (save for delivery trucks), making this a popular path. Tourists will discover a diverse range of restaurants specialized in cuisines such as Niçoise, French, Japanese, Chinese, Vietnamese, Spanish, and Italian. There are also several cafés where one may relax and have an aperitif, as well as various bakeries with coffee, cake, and a patio. There are also several little stores providing apparel, shoes, and gifts.

The Opéra de Nice is also located in Old Nice. It was built at the end of the nineteenth century to replace King Charles Félix’s Maccarani Theater, designed by François Aune. It is now available to the public and hosts a regular schedule of performances.

Nice has a Mediterranean climate with hot summers and pleasant winters with modest rainfall. For its latitude, it has one of the hottest Mediterranean climates. Summers are hot to hotter than usual, dry, and sunny. Rainfall is uncommon during this season, with just one or two days of measurable rainfall in a normal July month. The temperature is usually higher than 20 °C (68 °F) and regularly exceeds 30 °C (86 °F). The climatic data is collected from the airport, which is just a few hundred meters from the sea. As a result, summer temperatures in the city are often higher. In the warmer months of July and August, the average maximum temperature is about 27 °C (81 °F). On August 1, 2006, the maximum temperature recorded was 37.7 °C (99.9 °F). Autumn often begins bright in September and turns gloomy and wet in October, with temperatures remaining around 20 °C (68 °F) until November, when days begin to dip to approximately 17 °C (63 °F). Winters are distinguished by pleasant days (11 to 17 °C (52 to 63 °F)), chilly nights (4 to 9 °C (39 to 48 °F)), and unpredictable weather. Days might be bright and dry or cloudy and wet. Frost is exceptional, and snowfalls are so uncommon that residents remember them as unique occurrences. In January, the average low temperature is approximately 5 °C (41 °F). Spring begins mild and wet in late March and becomes progressively warm and bright by June.

The Chambre de commerce et d’industrie Nice Côte d’Azur is headquartered in Nice. It is in charge of the Nice – Côte d’Azur Airport, the Cannes – Mandelieu Airport, and the Port of Nice. Investors from France and overseas may benefit from the Côte d’Azur Economic Development Agency Team Côte d’Azur’s help.

Nice is the second most popular French city after Paris among visitors, which, coupled with the challenges of long-distance land travel (due in part to the Alps), enables it to boast the third busiest airport in France in terms of passenger counts (close to 10,000,000 passengers in 2005). It is readily accessible, taking less than 6 hours by rail from Paris, and the airport is just minutes away from the city.

The Palais des Congrès Acropolis is Nice’s only conference center. There are also various business parks in the city, notably l’Arenas, Nice the Plain, Nice Méridia, Saint Isidore, and the Northern Forum.

Furthermore, Nicetoile, Nice TNL, Nice Lingostière, Northern Forum, St-Isidore, the Trinity (around the Auchan hypermarket), and Cap3000 in Saint-Laurent-du-Var are among the city’s commercial centers.

Sophia Antipolis is a technological park located to the northwest of Antibes. A large portion of the park is located inside the commune of Valbonne. It was built between 1970 and 1984 and mostly houses enterprises in computers, electronics, pharmacology, and biotechnology. Several institutes of higher learning, as well as the European headquarters of W3C, are also situated here. The park is named after Sophie Glikman-Toumarkine, the wife of the park’s creator, French Senator Pierre Laffitte, and, coincidentally, Sophia, the goddess of knowledge. The park’s second name is taken from Antipolis, the ancient Greek name for Antibes.

The Nice metropolitan region had a GDP of $47.7 billion and a per capita income of $34,480, which was somewhat lower than the French average.