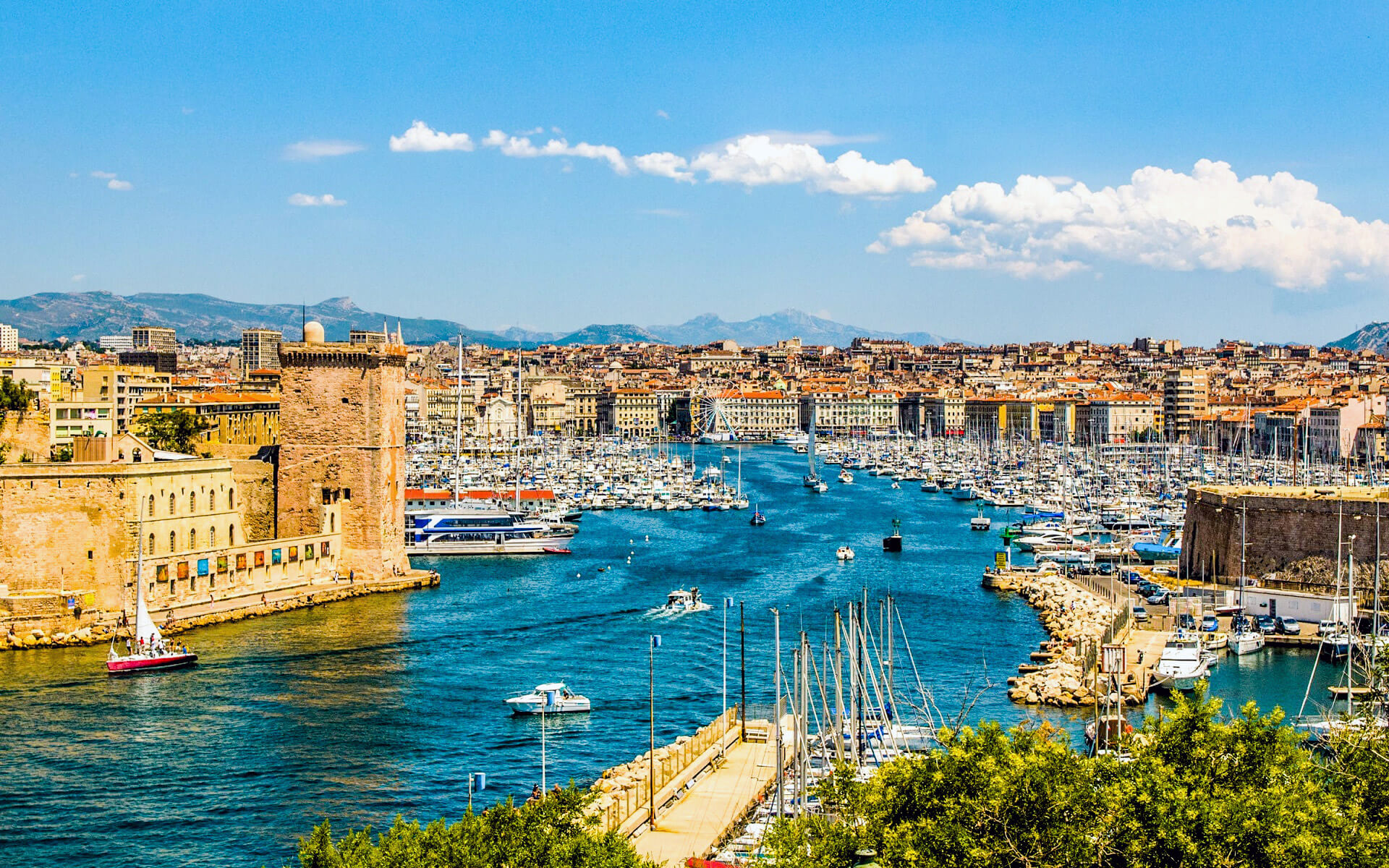 Marseille, often known as Marseilles in English, is a French city. Marseille, on France’s south coast, is the capital of the Bouches-du-Rhône department and the Provence-Alpes-Côte d’Azurregion, and the country’s second largest city after Paris, with a population of 852,516 in 2012 and an area of 241 km2 (93 sq mi), the third-largest metropolitan area in France after Paris and Lyon.

Marseille, known to the ancient Greeks and Romans as Massalia (Greek:M,Massala), was the region’s most significant trade center and the French Empire’s primary commercial port. Marseille is presently France’s biggest city on the Mediterranean coast, as well as the country’s busiest port for trade, freight, and cruise ships. In 2013, the city shared the title of European Capital of Culture with Koice, Slovakia. In 2016, it hosted the European Football Championship, and in 2017, it will be the European Capital of Sport. The city is home to numerous Aix-Marseille University campuses and is part of one of France’s major metropolitan conurbations, theMetropolis of Aix-Marseille-Provence.

Marseille (Latin: Massilia) is France’s second most populous city (and third largest urban area), the largest Mediterranean port, and the economic capital of the Provence-Alpes-Côte d’Azur region. In 2013, the city (together with its territory) was designated as the European Capital of Culture, and a great number of cultural events were held, as well as the opening of various new infrastructures. Marseille also hosted the EuroPride in 2013.

Marseille has a tumultuous past. It was built around 600 B.C. by the Phoceans (from the Greek city of Phocea) and is one of Europe’s earliest towns. The town is a long cry from the peaceful towns, “pétanque” players, and Marcel Pagnol books depicted in Cézanne paintings and Provençal clichés. Marseille is the second biggest city in France in terms of population and the largest in terms of area, with a population of over one million people. Its populace is a true melting pot of many ethnicities. It is also stated that in Marseille, there are more Comorians than in the Comoros! Indeed, the residents of Marseille come from a variety of ethnic origins, with many Italians and Spaniards having emigrated to the region following WWII.

Marseille is the place to go if you don’t mind discovering a genuine place with real people. Marseille has a lot to offer, from colorful markets (like Noailles market) that will make you feel like you’re in Africa, to the Calanques (a natural area of big cliffs falling into the sea – Calanque means fjord), to the Panier area (the oldest part of town and historically the place where newcomers settled), to the Vieux-Port (old harbor), and the Corniche (a road along the sea).

Forget the Canebière, the “savon de Marseille,” and the clichés, and simply take a trip from l’Estaque to Les Goudes. You’ll never forget it.

Marseille is a prominent center of art and history. There are several museums and galleries in the city, as well as many historical structures and churches.

The majority of Marseille’s attractions (including retail centers) are concentrated in the 1st, 2nd, 6th, and 7th arrondissements. These include:

OUTSIDE OF CENTRAL MARSEILLE

Marseille has a Mediterranean climate, with pleasant to hot, generally dry summers and mild to hot, largely dry winters. The coldest months are December, January, and February, with temperatures average approximately 12 °C (54 °F) during the day and 4 °C (39 °F) at night. July and August are the warmest months, with temperatures ranging approximately 28–30 °C (82–86 °F) during the day and 19 °C (66 °F) at night at the Marignane airport (35 km (22 mi) from Marseille), however the average temperature in the city near the sea is 27 °C (81 °F) in July. Marseille is officially the sunniest major city in France, with over 2,900 hours of sunshine per year, while the average in France is around 1,950 hours. It is also the driest major city, with only 512 mm (20 in) of precipitation per year, thanks to the Mistral, a cold, dry wind originating in the Rhône Valley that occurs mostly in winter and spring and brings clear skies and sunny weather to the region. The Sirocco, a hot sand-bearing wind from the Sahara Desert, is less common. Snowfalls are uncommon; more than half of the years do not see a single snowfall. The highest temperature was 40.6 °C (105.1 °F) on 26 July 1983 during a major heat wave, and the lowest temperature was 14.3 °C (6.3 °F) on 13 February 1929 during a significant cold wave, however temperatures above 100 °F (38 °C) or 20 °F (7 °C) are unusual.

Marseille is France’s second biggest city after Paris and the center of the country’s third largest metropolitan region after Paris and Lyon. The Calanques, a rough coastal landscape studded with numerous fjord-like inlets, are located to the east, beginning in the little fishing hamlet of Callelongue on the outskirts of Marseille and reaching all the way to Cassis. Further east are the Sainte-Baume (a 1,147 m (3,763 ft) mountain range rising from a deciduous woodland), Toulon, and the French Riviera. The 1,011 m (3,317 ft) Mont Sainte Victoire is located to the north of Marseille, beyond the low Garlaban and Etoile mountain ranges. The historic artists’ colony of l’Estaque located west of Marseille; farther west are the Côte Bleue, the Gulf of Lion, and the Camargue area of the Rhône delta. The airport is located at Marignane, on the Étang de Berre, to the north-west of the city.

The major road of the city (the large avenue known as the Canebière) runs eastward from the Old Port (Vieux Port) to the Réformés district. Fort Saint-Nicolas on the south side and Fort Saint-Jean on the north guard the entrance to the Old Port. The Frioul archipelago, located farther out in the Bay of Marseille, consists of four islands, one of which, If, is the home of Château d’If, made famous by Dumas’ book The Count of Monte Cristo. The city’s major business district crosses with the Canebière at Rue St Ferréol and the Centre Bourse (the main shopping mall). The pedestrian zones in Marseille’s center include street St Ferréol, Cours Julien near the Music Conservatory, Cours Honoré-d’Estienne-d’Orves off the Old Port, and the area surrounding the Hôtel de Ville. The Prefecture and the massive fountain of Place Castellane, a key bus and metro intersection, are located in the 6th arrondissement, south-east of downtown Marseille. The hills of the 7th arrondissement, overshadowed by the basilica of Notre-Dame-de-la-Garde, lie to the south-west. The train station, Gare de Marseille Saint-Charles, is located in the 1st arrondissement, north of the Centre Bourse, and is connected to the Canebière by the Boulevard d’Athènes.

Marseille is a large French commercial and industrial center with good transit infrastructure (roads, sea port and airport). Marseille Provence Airport is France’s fourth biggest. Marseille was rated the most active of France’s main cities by the French financial magazine L’Expansion in May 2005, citing numbers indicating that 7,200 businesses had been established in the city since 2000. Marseille is also France’s second biggest research center, with Aix Marseille University housing 3,000 research experts. The Marseille metropolitan area had a GDP of $60.3 billion in 2014, or $36,127 per capita (purchasing power parity).

Marseille’s economy was historically driven by its function as a French Empire port connecting the North African possessions of Algeria, Morocco, and Tunisia with Metropolitan France. During the Second Empire, the Port de la Joliette superseded the Old Port as the principal trading port, and it currently houses restaurants, offices, bars, and hotels, as well as serving primarily as a private marina. The majority of the port and docks, which declined in the 1970s during the oil crisis, have lately been renovated using European Union subsidies. Fishing is still vital in Marseille, and the local catch feeds the city’s food economy; a daily fish market is still conducted on the Quai des Belges in the Old Port.

Marseille’s economy and area are still inextricably tied to its commercial port, the first French port and the sixth European port by cargo tonnage, which is located north of the Old Port and east of Fos-sur-Mer. The port operations support around 45,000 employment and generate 4 billion euros to the area economy. The port handles 100 million tons of freight every year, 60 percent of which is petroleum, ranking it first in France and the Mediterranean and third in Europe. However, in the early 2000s, the continual strikes and social unrest hampered development in container traffic. With 1,062,408 TEU, the port ranks 20th in Europe for container traffic, and new infrastructure has already increased capacity to 2M TEU. The primary industries are petroleum refining and shipbuilding, although chemicals, soap, glass, sugar, construction materials, plastics, textiles, olive oil, and processed foods are also major goods. Marseille is linked to the Rhône via a canal, giving it access to France’s large waterway network. Pipelines transport petroleum northward to the Paris basin. In addition, the city is France’s major oil refining center.

WiFi is provided in many of the cafes and restaurants, as well as at certain spots on the street, in Le Vieux Port (although there are not many places to sit). The network is not encrypted and the ESSID to use is “Marseille sans fil.” When you initially join, your browser will take you to a web page explaining the service in French; just click on “Cliquez ici” (“Click here”) on that page to use the network without restriction.

It’s worth noting that WiFi is pronounced wee-fee or wiffy in French, even by English people. When you ask for Why-Fye, you’re frequently met with a blank stare.