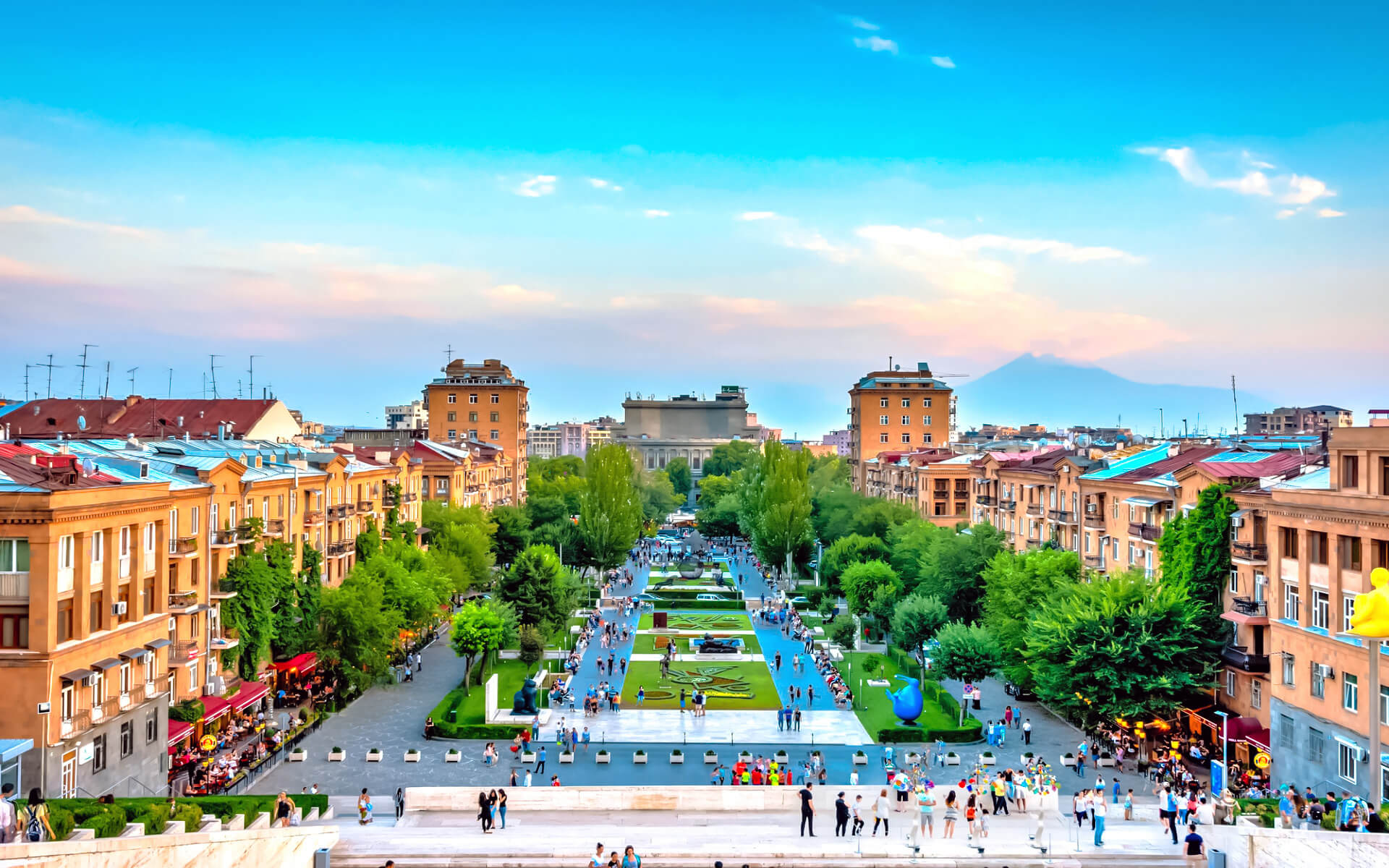 Yerevan is the capital and biggest city of Armenia, as well as one of the world’s oldest continuously inhabited cities (since 1918). Yerevan, located along the Hrazdan River, is the country’s administrative, cultural, and industrial hub.

The city is home to nearly a million people, making it the world’s biggest Armenian population.

During the Soviet era, Yerevan was heavily rebuilt in accordance with Alexander Tamanyan’s (the architect) new designs to create an ideal city – a Neo-Classical wide-avenues-based metropolis emulating Paris, Vienna, and Saint Petersburg.

Central Yerevan is a wonderful early Soviet architectural gem. She also has several large-scale Modern and Post-Modern wonders, the majority of which are the consequence of Soviet-Armenian architectural megalomania. In Soviet times, Yerevan was known as the Pink City, owing to the color of the tufa stone used in construction as well as the colorful spirit of its youthful people.

The majority of tourists in Yerevan congregate in the city center, which is small and easily accessible, and offers a plenty of food and entertainment choices.

Tourism in Armenia is growing year by year, and Yerevan, the capital city, is one of the most popular tourist attractions. The city is home to a large number of luxury hotels, sophisticated restaurants, bars, taverns, and nightclubs. With the increasing number of visitors visiting the nation, Zvartnots airport has also undergone refurbishment initiatives.

Many tourist attractions in Yerevan include the Republic Square dancing fountains, the State Opera House, the Cascade complex, the remains of the Urartian city of Erebuni (Arin Berd), and the archaeological site of Karmir Blur (Teishebaini).

The fundamental plan consists of two ring highways with a grid within them. Climbing the Cascade stairs will provide you with one of the nicest views of Yerevan. Sunsets are spectacular here.

Yerevan’s climate is steppe, with long, hot, dry summers and short, but cold and snowy winters.

Yerevan receives an average of 2,700 hours of sunshine each year.

Yerevan is situated on the banks of the Hrazdan River, northeast of the Ararat plain (Ararat Valley), in the country’s center-west.

The top section of the city is surrounded by mountains on three sides, while the lower half of the city falls to the banks of the Hrazdan River on the south.

Through a magnificent gorge, the Hrazdan separates Yerevan into two halves.

Many foreign corporations have their headquarters in Yerevan, which is an appealing outsourcing destination for Western European, Russian, and American multinationals.

Despite the fact that the country’s economy was devastated by the 1990s economic crisis, some facilities continue in operation, particularly in the petrochemical and aluminum industries.

Armenian drinks, particularly Armenian cognac and beer, are well-known across the globe. As a result, Yerevan is home to several of Armenia’s and the Caucasus’ largest alcoholic beverage manufacturing firms.

In Armenia, Internet Club refers to stores that provide Internet connection through PCs. There are Internet cafés all over the place, and they are reasonably priced.

In Armenia, there are three GSM service providers. It is highly encouraged to get a temporary prepaid SIM card since they are inexpensive and easy, enabling both local and international calls, charging no for incoming calls, and charging no monthly cost. Mobile internet and UTMS are also available from all operators, in addition to the standard complete range of cellular services.