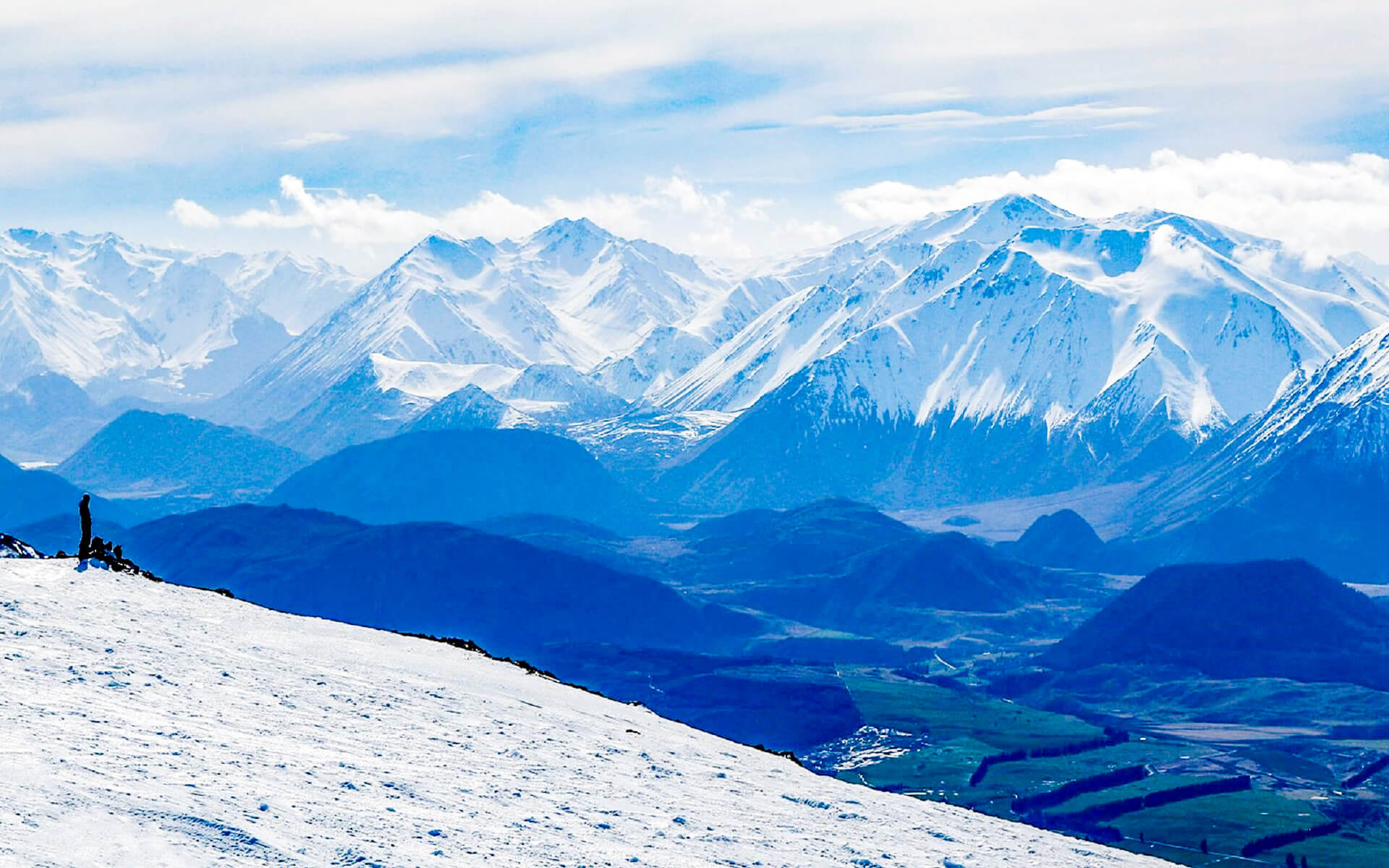 Mount Hutt is New Zealand’s most well-known ski resort, with breathtaking views from the summit of Mount Hutt (2,086m) overlooking the patchwork Canterbury plains that stretch out to the Pacific Ocean in one direction and the jagged peaks of the Southern Alps in the other – it’s an impressive and memorable vantage point.

Mount Hutt rises on the South Island of New Zealand, west of the Canterbury Plains, above the braided upper stages of the Rakaia River, and 80 kilometers west of Christchurch. Its peak rises 2190 meters above sea level.

The mountain has a commercial alpine ski area with the biggest skiable area on the South Island (3.65 square kilometers) and a vertical height of 683 meters.

It has a “magic carpet” lift for novices, decent intermediate and difficult lines, and access to huge off-piste sections, so it caters to a broad variety of skiers. The most difficult lines on the mountain are up the South Face and via the rock formations at the top of the area known as “The Towers.” A high-speed six-seater chair, a quad chair, a triple chair, and a magic carpet are among the lift options. The magic carpet is the world’s first shipping container-enclosed vehicle.

From June through October, the snow season is in effect. Mount Hutt takes pride in being the first ski-field in the Southern Hemisphere to open at the start of each season. However, the skifield’s steep thirteen-kilometer access road is prone to shutdown in bad weather, earning it the moniker “Mount Shut.” Winds of up to 200 km/h hit the ski area on August 12, 2010, causing it to close along with the access road and stranding 1200 people on the mountain overnight, where they were housed in the ski-base field’s facilities. The road was reopened the next day.

Because there is no housing on the summit, most guests stay in the adjacent town of Methven, which is a 35-minute drive away. Ashburton, a major town, is 55 minutes distant. The city of Christchurch is one hour and 45 minutes distant by car.

Mt Hutt gets 4 metres of snowfall on average every season, which is remarkable in comparison to other NZ commercial ski resorts, although snow conditions may be highly varied, as they are in other NZ ski resorts. Dry powder, mashed potatoes, cement, slush, or ice are all possibilities.

Mt Hutt’s location on the edge of the mountain range exposes it to cold and strong southerly winds, which is one of its drawbacks. Because the ski area and the steep windy access road are at the whim of the weather gods, Mt Hutt has been dubbed Mt Shut. Bring a book, hang out at the Blue Pub, or discover other non-skiing activities in Methven, since the resort may be closed for at least one day during your visit. If it’s open, not all of the elevators may be operational.

The resort is closed 14 days every season on average due to bad weather, however since Mt Hutt has such a lengthy season, the positive spin is that it has more “open” days per season than other resorts. Of course, poor weather is often accompanied by snowfall, and Mt Hutt’s geological attributes ensure that it collects the snow like a baseball glove. Powderhounds are occasionally pleased for the resort to be closed if it means more snow!

Another benefit of Mt Hutt’s exposed nature is that it gives vistas that are nothing short of spectacular. On a clear day, you can see all the way to the Pacific from the Canterbury Plains. The vistas of the snow-covered Southern Alps from the rear of the summit appear to continue on forever.