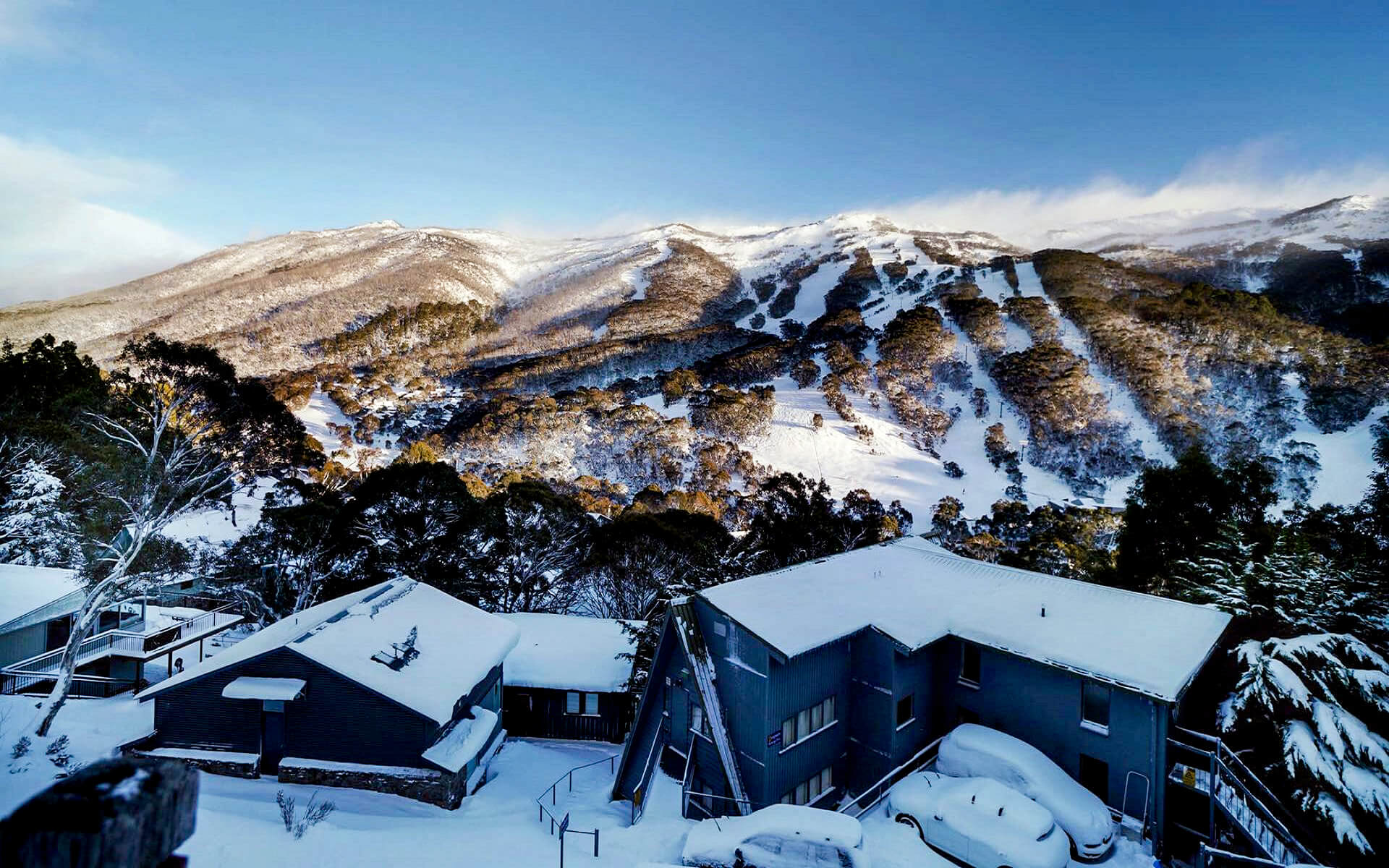 Thredbo is a hamlet and ski resort in New South Wales’ Snowy Mountains, Australia, and is part of the Snowy Monaro Regional Council. It is located around 500 kilometers south of Sydney and is accessible through the Alpine Way via Cooma, Berridale, and Jindabyne. The settlement is located at the foot of the Ramshead Range in the valley of the Thredbo River, also known as the Crackenback River.

Thredbo is perhaps Australia’s closest approximation to an alpine community. It is located right on the snowline and offers a range of accommodations, including ski lodges, restaurants, and even a heated swimming pool. In the winter, accommodation is only a short walk or shuttle bus ride from the ski lifts, and the town is still active throughout the summer months, with bushwalks, mountain biking, and even some snowplay. Perisher Valley, on the other hand, is a huge ski resort with more lifts and skiing space throughout the winter. However, it is not a summer destination, and all you will find is a vast parking lot. There is some lodging available as well, although the vibe is hardly that of an alpine community.

During the winter, the resort is coated in snow, offering skiers and snowboarders Australia’s longest runs and most spectacular skiable terrain, earning Thredbo the title of Australia’s top ski resort.

Thredbo caters to skiers and snowboarders of all levels of skill, from beginner to expert, with fourteen lifts serving 480 hectares of skiable territory and Australia’s biggest purpose-built beginners’ area at Friday Flat.

Thredbo receives around two metres of natural snowfall every year. A massive network of mechanical snow manufacturing is used to supplement natural snow fall, allowing for a winter season that lasts 16 to 18 weeks every year.

Outside of the snow season, Thredbo Alpine Village has a diverse range of leisure facilities, including a 50m swimming pool, squash courts, a gymnasium, a 9-hole golf course, tennis courts, bobsled, and an expanding mountain biking trail network that includes downhill and cross-country trails, as well as a pump track on the Village Green.

An yearly schedule of music and cultural events supplements the year-round activity, which draws somewhat less than a million people every year.

The town has around 4,150 beds but only 471 permanent residents. When the mountain is completely covered in snow, Thredbo offers the longest ski routes in Australia, attracting over 700,000 winter tourists each year. Thredbo is a hiking and summer sport attraction in the summer, including rock climbing and abseiling, fishing and cross-country cycling, and a blues music festival that attracts roughly 300,000 summer tourists.

Thredbo is an Australian ski resort located in Kosciuszko National Park in New South Wales. It was designed after a European skiing town, representing the history of Snowy Mountains Scheme personnel such as Tony Sponar, who is credited with establishing the region as a ski field. In contrast to Perisher, which is essentially a lodge town, Thredbo has a town with lodges, shops, and nightlife. There are 14 lifts at Thredbo (3 hi-speed quads, 1 quad, 5 t-bars, 3 double chairs, and 2 snowrunners). It features the steepest overall terrain of any mainland Australian ski resort, as well as the highest lifted point (2037m AHD). The lease-holder Kosciuszko Thredbo and private adventure firms have access to Mt. Kosciuszko’s backcountry ski trips from this highest access point at Karel’s T-Bar. Thredbo Village is located at the foot of the Crackenback Valley, and owing to its low elevation (1365m), the ski resort does not usually keep snow on the bottom half of the mountain due to higher temperatures, while temperature inversions at night and temperatures below zero allow snow formation. As a result, Thredbo has spent over $6 million on the Southern Hemisphere’s biggest snowmaking system, encompassing 65 hectares of track and using a three-stage automated process. The system is mostly used at night to fill up the bottom part of the mountain and other heavy traffic locations. The Supertrail, Friday Flat, High Noon, The Cruiser area’s Walkabout and Ballroom, Sundowner, Lovers Leap bypass, World Cup, and Lower True Blue are among the automated zones.

Thredbo has more than 50 ski routes and uses a normal three-color grading system: green for beginners, blue for intermediate, and black diamond for advanced. The resort has been chastised for altering the criteria of these grades in various regions of the mountain. The longest continuous run is 5.9 km long, from the top of Karel’s T-Bar to Friday Flat; however, this is made up of multiple paths. The Crackenback Supertrail, Australia’s longest single run, is the longest in the country. Funnel Web, an entirely ungroomed ski track infamous for its steep middle portion, bumps, and moguls, is claimed to be Thredbo’s most challenging run.

During the Vietnam War, troops could choose Australia as a destination for a week of rest and relaxation. The USO has a variety of activities available at the Sydney airport for soldiers to choose from. One alternative was to ski in Thredbo at a discounted fee. The package includes round-trip transportation (part plane, part bus), hotel, breakfast and supper for each night, equipment, a group instruction, and a lift ticket. Gloves, ski trousers, and a warm jacket were also supplied; troops in Vietnam didn’t have any of these items and required them all to be provided. At the conclusion of the season, matting were installed on the lower slopes, allowing skiers to reach the bottom.

During the winter, the town provides a free shuttle bus service that connects the Valley Terminal, Friday Flat, and the bulk of the ski lodges.

Thredbo, like many other Australian ski resorts, is not known for its snow quality or quantity. The average snowfall every season is around 2 meters, and the snow quality may range from deep powder to slurpee-like or spotty.

Many of the slopes on the resort’s eastern side have a largely south-facing orientation, and Thredbo Resort also offers the highest lifted terrain in Australia via a T-bar at 2,037 metres (Perisher has the highest chair lift at 2,034m!). However, the snow quality isn’t as nice lower down the slope, and it doesn’t always last until noon on High Noon!

Thredbo skiing may be a lot of fun, but it’s no surprise that many Australians travel skiing in Japan during the summer to get their powder fix.

There are several lodging alternatives in Thredbo, including hotels, catered lodges, flats, and chalets. Much of the hotel in Thredbo caters to premium budgets, however there is some affordable accommodations, including a hostel. There are three primary zones for lodging.

Staying in Thredbo Village puts you in the middle of the action, and the slopes are only a short walk (or shuttle ride) away.

Woodridge, near Friday Flat, is a nice place to stay for first-timers and those who need childcare. The River Inn is well-known for its unique ski-in/ski-out access to the Friday Flat region.

Some privately owned ski in ski out chalets may be found in the Crackenback Ridge region near the Thredbo golf course.

Unlike Perisher, which is largely made up of ski lodges, Thredbo Village is beautiful and boasts a variety of services and businesses. There are several restaurants and bars, including après-ski pubs and sophisticated wine and cocktail lounges. There are also many restaurants on the slopes, including the magnificent Eagles Nest, Australia’s highest restaurant.

Thredbo also features well-developed ski resort services, such as an excellent ski school giving training for children 3 and up, as well as child care for newborns from 6 weeks and up.