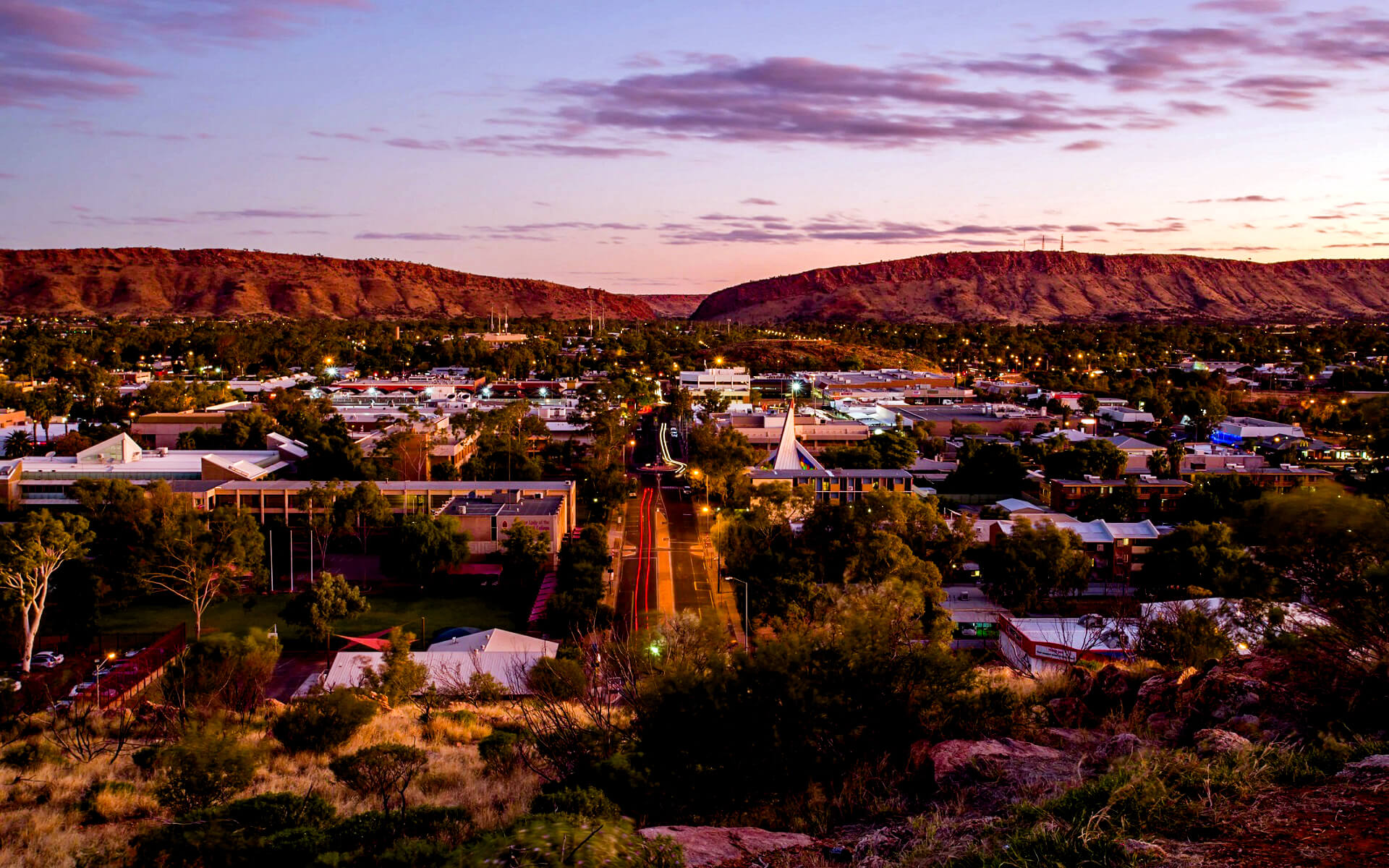 Alice Springs is the third biggest town in Australia’s Northern Territory. Alice Springs, sometimes known as “the Alice” or just “Alice,” is located approximately in the geographic center of Australia.

To its indigenous occupants, the Arrernte, who have lived in the Central Australian desert in and around what is now Alice Springs for thousands of years, the place is known as Mparntwe. Surveyor William Whitfield Mills named the English word “Alice” after Lady Alice Todd (née Alice Gillam Bell), wife of telegraph pioneer Sir Charles Todd. Alice Springs has a population of 28,605, accounting for 12.2 percent of the territory’s total. Adelaide and Darwin are almost equidistant from Alice Springs.

The village is located on the northern edge of the MacDonnell Ranges, straddling the typically dry Todd River. The surrounding area is known as Central Australia, or the Red Centre, and it is an arid environment made up of various deserts. Temperatures at Alice Springs may vary drastically, with a summer high temperature of 35.6 °C (96.1 °F) and a winter low temperature of 5.1 °C (41.2 °F). Many challenges have arisen in Alice Springs in recent years, mostly as a result of an increase in crime and a major ethnic split that has existed in the town for many years.

Alice Springs is the center of Central Australia, with vast gorges, endless desert scenery, distant Aboriginal villages, and a lovely pioneering past. It represents the tough outback of the Northern Territory’s Red Centre and serves as a gateway to the region’s attractions and climbs, including Uluru (previously known as Ayers Rock), Kata Tjuta (formerly known as the Olgas), and Kings Canyon. Since the beginning of the tourist boom in the early 1980s, the population has increased significantly to over 28,000. Although surface water is sparse in the area, there is plenty underneath! It’s a fantastic town that’s definitely worth a visit.

Alice Springs is 1500 kilometers from the next large city, Darwin, to the north, or Adelaide, to the south. As a consequence, the residents of the town are often rather inventive when it comes to making things endure!

Also, because of the distance, certain items, such as fruits and vegetables and clothes (if you neglected to carry your singlet or jacket! ), may be more expensive than in cities. Overall, the town isn’t too pricey when it comes to necessities, and it’s far cheaper than smaller outback towns, making it a perfect spot to stock up before venturing into more isolated places.

Another thing to keep in mind is that hotels in Alice Springs are evaluated differently than those in European or American nations, since hotels are assessed based on their amenities rather than their actual rooms. The reason for this is the distance between Alice Springs and anything else, as well as the challenges in obtaining construction supplies. Keep in mind that the star ratings indicate the establishment’s quality.

Tourism is a significant sector in Alice Springs, with well-developed visitor facilities. For Visitor Guides, maps, tour and accommodation reservations, and recommended itineraries, head to the Alice Springs Visitor Centre at 60 Gregory Terrace, near the south end of Todd Mall. On their website, you may even download or see the most recent Visitor Guide for Central Australia.

The town of Alice Springs, located just south of the Tropic of Capricorn, spans the typically dry Todd River on the northern side of the MacDonnell Ranges. Alice Springs is situated in Central Australia, commonly known as the Red Centre, an arid region comprised of multiple deserts.

The climate at Alice Springs is desert (BWh). The annual average rainfall is 285.9 millimetres (11.3 in), which would indicate a semi-arid climate but for the high evapotranspiration, or aridity, which indicates a desert environment. In Alice Springs, annual precipitation is unpredictable, shifting from year to year. In 2001, 741 millimetres (29.2 in) fell, while just 198 millimetres (7.8 in) dropped in 2002.

The towering McDonnell Ranges lie to the south, with all transport linkages to the south via “Heavitree Gap” – a remarkable small gap in the range through which the railway, highway, and Todd River travel without any rise. William Mills, an Overland Telegraph line surveyor, called Heavitree Gap. He named it after his previous school in Devon (UK).

The roads in and around Alice Springs are usually level and border many of the hills, some of which are sacred to the local Indigenous people.

Alice Springs developed as a service town for the pastoral industry, which was the first to arrive in the area. The establishment of the train line boosted the country’s economy and productivity. Today, the town serves a territory of 546,046 square kilometers (210,830 square miles) with a population of 38,749 people. The area is home to a variety of mining and pastoral settlements, as well as the Joint Defence Space Research Facility in Pine Gap and tourist sites like as Uluru-Kata Tjuta National Park, Watarrka National Park, and the MacDonnell Ranges.

The Northern Territory Government is the main employer in Alice Springs, employing 7.5 percent of the workforce, 6.6 percent in school education, and 3.7 percent at the Alice Springs Hospital. Alice Springs’ economy is partly dependent on domestic and international tourism, with 3.8 percent of its workforce engaged in the hospitality industry.

Along with Territory Discoveries, all major tour companies, including AAT Kings and APT, have a base in Alice Springs, as do numerous local operators, including Emu Run Tours, Anganu Waai! tours, Alice Wanderer, and Wayoutback Desert Safaris, the only locally based Advanced Ecotourism Accredited operator.

There are various hotels in Alice Springs, ranging from the 4.5-star Lasseters Hotel Casino to backpacker hostels. Caravan campgrounds are also available.

The Royal Flying Doctor Service of Australia has a dispatch center here.