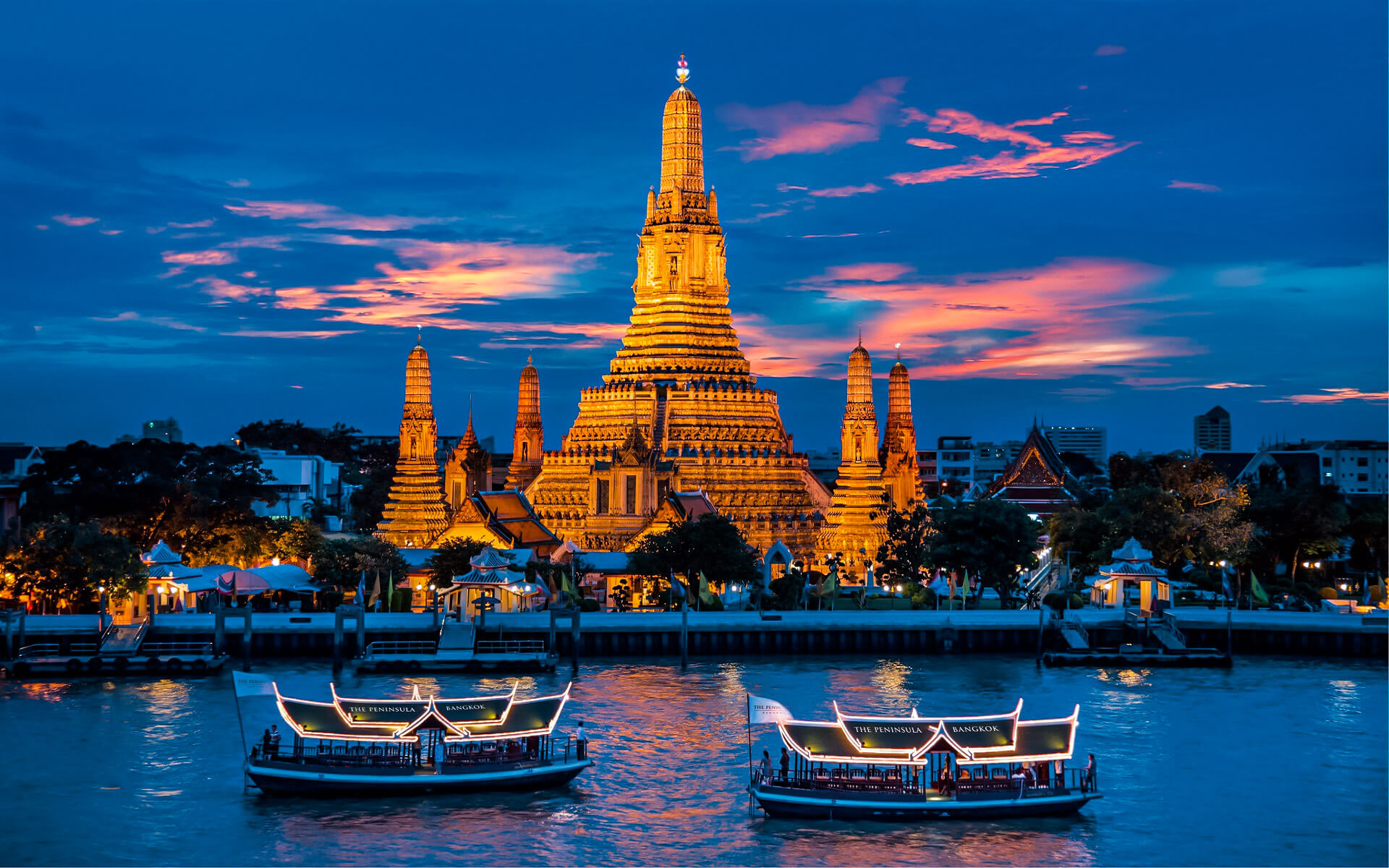 Bangkok is Thailand’s capital and most populated city.

The metropolis has a population of about 8 million people and covers 1,568.7 square kilometers (605.7 square miles) on the Chao Phraya River delta in Central Thailand.

Its high-rise buildings, terrible traffic congestion, searing heat, and raucous nightlife may not instantly make you feel welcome — but don’t let that deceive you. It is one of Asia’s most cosmopolitan cities, with stunning temples and palaces, real canals, bustling marketplaces, and a thriving nightlife that caters to all tastes.

It was merely a tiny trade port on the banks of the Chao Phraya River for many years until King Rama I, the first king of the current Chakri dynasty, made it the capital of Siam in 1782, after the destruction of Ayutthaya by Burmese invaders. Bangkok has now become a national treasure, serving as Thailand’s spiritual, cultural, political, economic, educational, and diplomatic center.

During the Asian investment boom of the 1980s and 1990s, numerous multinational businesses chose Bangkok as the location for their regional headquarters. The city is currently a prominent regional financial and commercial powerhouse. It has grown as a regional center for the arts, fashion, and entertainment, as well as an international hub for transportation and health care.

The city is well-known for its bustling street life, cultural monuments, and infamous red-light districts. The ancient Grand Palace and Buddhist temples like as Wat Arun and Wat Pho contrast with other tourist attractions such as Khaosan Road and Patpong’s nightlife districts.

Bangkok is one of the world’s most popular tourist destinations. In its Worldwide Destination Cities Index, MasterCard placed Bangkok as the global top destination city by foreign visitor arrivals, with 15.98 million expected tourists in 2013. After New York, London, and Paris, the city ranks fourth in cross-border expenditure, with 14.3 billion dollars expected for 2013.

Bangkok’s unique views, attractions, and city life appeal to a wide range of travelers. Its primary historical and cultural tourism attractions include royal palaces and temples, as well as various museums. Shopping and eating experiences provide a diverse variety of options and costs. The city is also well-known for its vibrant nightlife. Although the sex tourism sector in Bangkok is generally recognized among foreigners, it is seldom publicly acknowledged by locals or the government.

Bangkok is well-known in the international sex business as a prominent sex destination. Although prostitution is officially prohibited and seldom publicly mentioned in Thailand, it is ubiquitous in massage parlors, saunas, and hourly motels that cater to both international visitors and locals. Bangkok has earned the moniker “Sin City of Asia” due to its high amount of sex tourism.

Retail options vary from the shopping malls and department shops focused in Siam and Ratchaprasong to the vast Chatuchak Weekend Market, which is popular with both visitors and residents. Taling Chan Floating Market is one of Bangkok’s few floating marketplaces. Yaowarat is well-known for its stores and street-side food booths and restaurants, which can be found throughout the city. Khao San Road has long been known as a backpackers’ hotspot, drawing tourists from all over the globe with its low-cost accommodations, shops, and bars.

The Grand Palace and famous Buddhist temples like as Wat Phra Kaew, Wat Pho, and Wat Arun are among Bangkok’s well-known attractions. The Giant Swing and Erawan Shrine reflect Hinduism’s significant cultural impact in Thailand. The world’s biggest teak structure, Vimanmek Mansion in Dusit Palace, is renowned, while the Jim Thompson House is an example of traditional Thai architecture. The Bangkok National Museum and the Royal Barge National Museum are two more prominent museums. Cruises and boat rides on the Chao Phraya and Thonburi canals provide views of some of the city’s historic architecture and waterfront ways of life.

Bangkok is the world’s hottest city, according to the World Meteorological Organization. Bangkok, which is just 14 degrees north of the equator, has sunshine all year and temperatures that exceed 30°C (86°F).

The chilly season, which lasts from November to February, is the most enjoyable time to visit. It is the coldest and driest season – the Emerald Buddha statue at Wat Phra Kaeo even wears a scarf! But don’t assume it’s required – daytime temperatures are still about 30°C (86°F), but it cools down into the late 20s when it gets dark (lower 70s in Fahrenheit). The hot season lasts from March to April, and it’s hot — 35°C (95°F) on average, but don’t be shocked if heat indices soar into the 50s °C (about 120 °F+). This is the worst time to visit Bangkok, so plan on spending a lot of time in air-conditioned shopping malls and staying at a hotel with a pool. Then there’s the rainy season, which lasts from May to October. Massive downpours, resulting in flooding across the city, are expected, as are thunderclaps at times. But it’s not all awful – the afternoon rains are really a lovely way to cool down from the heat, and although they might linger all day, they generally pass in an hour. Extreme rainfall occurs in September and October, thus these are the months to avoid.

Whatever season you visit, don’t underestimate the weather – temple-tramping in the blazing midday heat may be difficult, so come prepared. Dress comfortably for the weather, but bear in mind that several palaces and temples (particularly the Grand Palace) have a rigorous dress code, which requires everyone to completely cover their body, legs, and upper arms. As a result, shorts, halter tops, and other similar attire will prevent you from entering. Vendors may hire essential covering at the gates to several major attractions.

Also, be sure to consume enough of water! There’s no reason not to when 7-Elevens and other convenience shops provide cold drinks for as cheap as 10 baht. Locals acquire their water from “reverse osmosis” cleaned water dispensers that fill up a one-litre bottle for one baht, however potability may vary for tourists.

Bangkok is Thailand’s economic center and the hub of the country’s investment and growth. Bangkok’s economy ranks sixth in Asia in terms of per-capita GDP, behind only Singapore, Hong Kong, Tokyo, Osaka–Kobe, and Seoul.

When the Bangkok Metropolitan Region is examined, manufacturing accounts for 28.2 percent of the gross regional product, indicating the density of industry in Bangkok’s neighboring provinces. Greater Bangkok’s automobile sector is Southeast Asia’s major manufacturing center. Tourism is also a substantial contribution to the Bangkok economy, contributing 427.5 billion baht ($13.38 billion) in income in 2010.

In Bangkok, economic disparity is a big problem, particularly among relatively unskilled lower-income immigrants from rural provinces and neighboring countries and middle-class professionals and corporate leaders. Although absolute poverty rates are low—only 0.64 percent of Bangkok’s registered population were poor in 2010, compared to a national average of 7.75 percent—economic inequity remains significant.

Bangkok has a plethora of Internet cafés. You should expect to pay roughly 30-60 baht per hour in tourist locations like Khao San Road, 20-30 baht per hour in downtown (the upper floors of MBK, for example), and 10-15 baht per hour in residential neighborhoods (where the speed generally is still high).

A growing number of cafés and bars now provide free Wi-Fi to its patrons. Most hotels and guesthouses provide some type of Internet access. Some rooms offer Wi-Fi, but check with the hotel before making a reservation.

A prepaid SIM card with mobile data is a wonderful alternative if you are staying for more than a few of days and want to remain connected without being confined to hotspots. The ability to utilize a smartphone for navigation and reviews is very handy in a city where local advice and instructions are not always credible.

Bangkok’s area code is 02. If you’re phoning from inside Thailand, you simply need to dial the 0 number. Pay phones are uncommon since the majority of Thais own a cell phone. If you wish to avoid exorbitant roaming fees, you may get a local SIM card at Suvarnabhumi Airport for 100 baht (or other mobile phone stores throughout the city). The 100 baht is not just for the SIM card, but also for your initial pre-paid balance. It’s simple to top it off; just stroll into a 7-Eleven convenience shop and choose the amount you wish to add. It is also less expensive to make international calls this way.

Since July 2014, the True station at Suvarnabhumi Airport has been providing free tourist Sim cards preloaded with 10 baht calling credit and 20 MB of 3G connectivity.

Bangkok’s red post boxes may be located across the city. There are also several Thailand Post offices nearby for shipping mail and goods. Post offices may be found in tourist destinations like as Khao San Road (in front of Wat Bowonniwet) and Sukhumvit Road (between Soi 4 and 6).

If you’re living in Bangkok for an extended period of time, you may wish to utilize poste restante, which allows others to send you letters or packages using a post office’s address. Letters are kept by post offices for at least two months. Characters delivered by poste restante must have the recipient’s name in capital letters, with the family name highlighted. If you wish to pick them up on Khao San Road (opposite Wat Bowonniwet), please send your letter to Poste Restante, Banglamphubon Post Office, Bangkok, 10203, Thailand. If you wish to pick up your mail in Sukhumvit, address it to Poste Restante, Nana Post Office, Sukhumvit Road, Bangkok, 10112, Thailand.