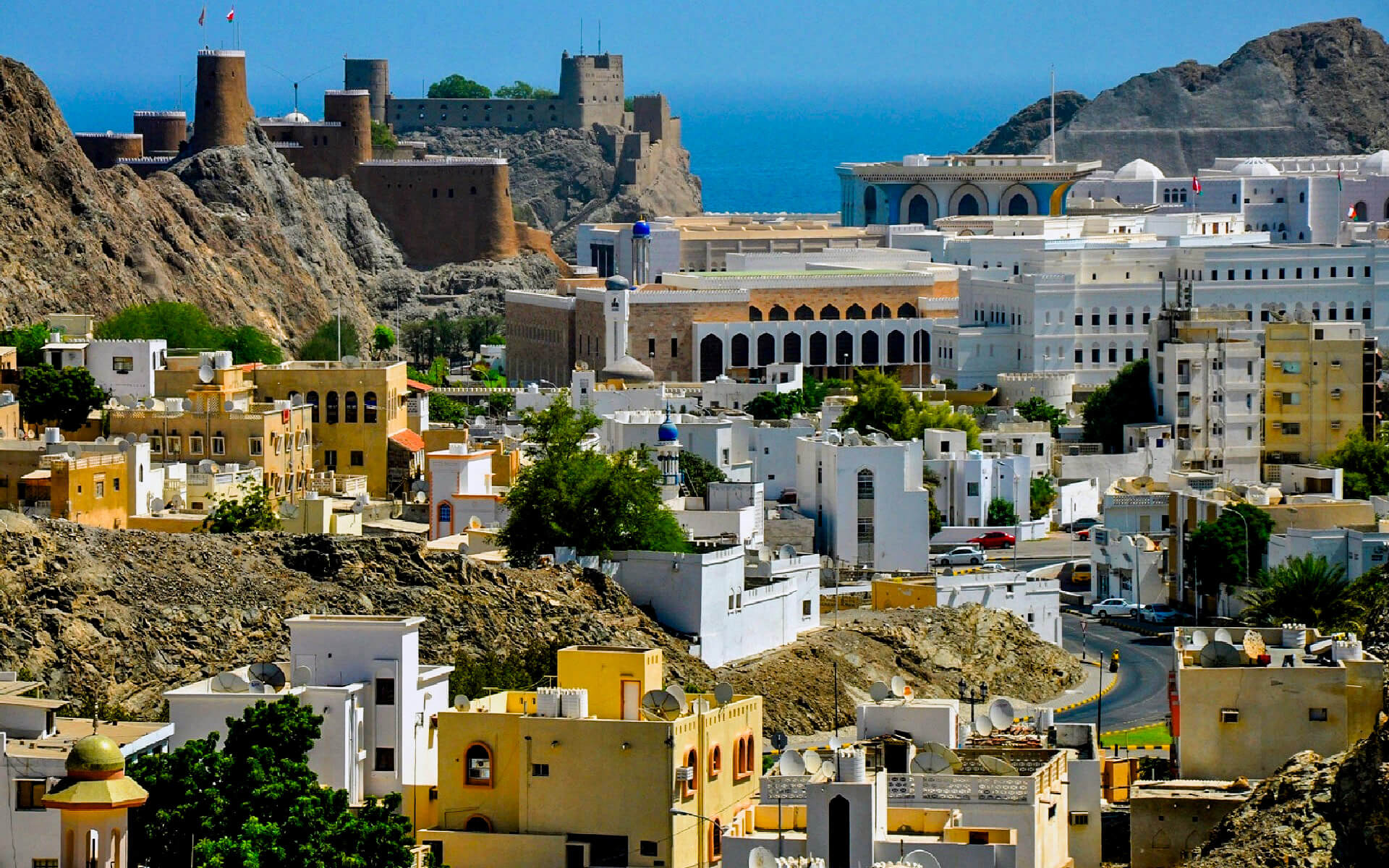 Muscat is the Sultanate of Oman’s capital and its most significant and populated city (at 1.2 million).

Muscat has been known as a major commercial port between the west and the east from the early first century CE, and has been governed by numerous local tribes as well as foreign powers such as the Persians, the Portuguese Empire, and the Ottoman Empire at various periods in its history.

Muscat’s environment is dominated by the craggy Western Al Hajar Mountains. The city is located on the Arabian Sea, in the Gulf of Oman, and is close to the strategically important Straits of Hormuz.

It has a multi-ethnic and multi-cultural community and welcomes the most international tourists in the country. Muscat, unlike other Gulf towns, most notably those in the UAE and Qatar, lacks a contemporary skyline. Following the Sultan’s preferences, contemporary building must conform to historic Arabic architectural styles, resulting in a more subdued metropolitan setting.

Muscat is home to a variety of museums. The Omani Heritage Museum, the National Museum of Oman, the Oman Children’s Museum al Zubair, the Oman Oil and Gas Exhibition Centre, the Omani French Museum, the Sultan’s Armed Forces Museum, and the Omani Aquarium and Marine Science and Fisheries Centre are among them. The Bait Al Falaj Fort was significant in Muscat’s military history.

There are various mosques in the city, including the Sultan Qaboos Grand Mosque, Ruwi Mosque, Saeed bin Taimoor Mosque, and Zawawi Mosque. There are also a few Shi’ite mosques in the area.

One of the most recent initiatives was the construction of an opera theater, which opened on October 14, 2011. The Oman National Museum is one of the most significant new initiatives. Along with the Sultan Qaboos Grand Mosque, it is projected to be an architectural treasure.

Old Muscat and the Old Palace are highly recommended for visitors. The primary retail sector is in Al Qurum Commercial Area, however shopping malls can be found across the city. Oman Avenues Mall, situated in Ghubra, Muscat, is one of the largest malls in Oman.

Muscat has a hot, dry climate with long, scorching summers and mild “winters.”

Muscat receives roughly 10 cm (4 in) of rain each year, with the most of it falling between December and April.

The climate is often quite hot, with summer temperatures regularly surpassing 40 °C (104 °F). Summer humidity is between 40 and 60 percent, which is rather high for such high temperatures.

The sea around Muscat’s shore is deep, producing two natural harbours, one in Muttrah and one in Muscat. The Western Al Hajar Mountains extend along the city’s northern shore.

Volcanic rocks, made of serpentine and diorite, are visible in the Muscat region, spreading along the Gulf of Oman coast for ten or twelve 16-kilometer (9.9-mile) stretches from the district of Darsait to Yiti. The hills and mountains of Muscat are made up of Plutonic rocks that stretch for around 30 miles (48 kilometers) from Darsait to Ras Jissah. These igneous rocks are composed of serpentine, greenstone, and basalt, which are characteristic of rocks found in the Arabian Peninsula’s southeastern parts. South of Muscat, the volcanic rock layers are broken up and twisted, rising to a maximum elevation of 6,000 feet (1,800 m) at Al Dakhiliyah, an area that contains the country’s highest mountain, Jebel Akhdar. Muscat’s hills are generally barren of flora, yet they are rich in iron.

The economy of Muscat, like that of Oman, is driven by commerce.

Dates, mother of pearl, and fish were among the city’s most traditional exports. Many of Muttrah’s souks offer these things as well as traditional Omani artifacts.

Petroleum Development Oman (PDO) has been an important part of the Muscat economy since at least 1962, and it is the country’s second biggest employment behind the government. PDO’s principal owners are Royal Dutch/Shell, Total, and Partex, and its projected production capacity is 720,000 barrels per day (114,000 m3/d).

The Muscat Securities Market is Oman’s main stock market. It was founded in 1988 and is based in Muscat’s Central Business District. It has since distinguished itself as a pioneer among its regional counterparts in terms of openness and disclosure norms and criteria.

With an annual throughput of around 1.6 million tons, Muscat’s principal trade port, Mina’a Sultan Qaboos, serves as a commerce center between the Persian Gulf, the Indian subcontinent, and the Far East. However, the development of the Jebel Ali Free Zone in adjacent Dubai, United Arab Emirates, has elevated that port to the region’s largest marine commercial port, with around 44 million tons of cargo exchanged yearly.

Omantel sells pre-paid Hayyak SIM cards and top-up cards in mobile phone stores and hypermarkets. Pre-paid Jibreen Cards, valid on both mobile and landlines, are also available in amounts of OMR5 and OMR1.5. You receive 11 minutes of talk time with an OMR5 card.

In Oman, Skype is prohibited and can only be accessed with a VPN. Other VoIP services had previously been prohibited; however, Google Talk, Viber, FaceTime, and MSN Messenger are presently available.

The Global One calling card is not accepted in Muscat. Although the Global One website provides the prices for calls from Oman, no phone numbers are provided. The closest Global One customer service center is in Dubai.

Omantel Ibhar hotspots may be found all across Muscat, mostly in coffee shops, restaurants, and shopping malls. Pre-paid Ibhar cards may be purchased at any Omantel desk or hotspot point.

Rotterdam is a Dutch city in South Holland, situated in the Rhine–Meuse–Scheldt river delta on the North Sea. Its history dates back to 1270,...
Read more

Innsbruck is the capital city of Tyrol, which is located in western Austria. It is situated in the Inn valley, at the intersection of...
Read more

San Francisco, formally the City and County of San Francisco, is Northern California’s cultural, commercial, and financial capital, as well as the state’s only...
Read more

Cluj-Napoca, also known as Cluj, is the second most populous city in Romania, behind Bucharest, and the headquarters of Cluj County in the country’s...
Read more

Salzburg is the capital of the federal state of Salzburg and Austria’s fourth biggest city. Salzburg’s “Old Town” (Altstadt) is one of the best-preserved city...
Read more

Port Moresby, commonly known as Moresby and Pom Town, is Papua New Guinea’s capital and biggest metropolis (PNG). It is situated on the beaches of...
Read more
Tourist attractions