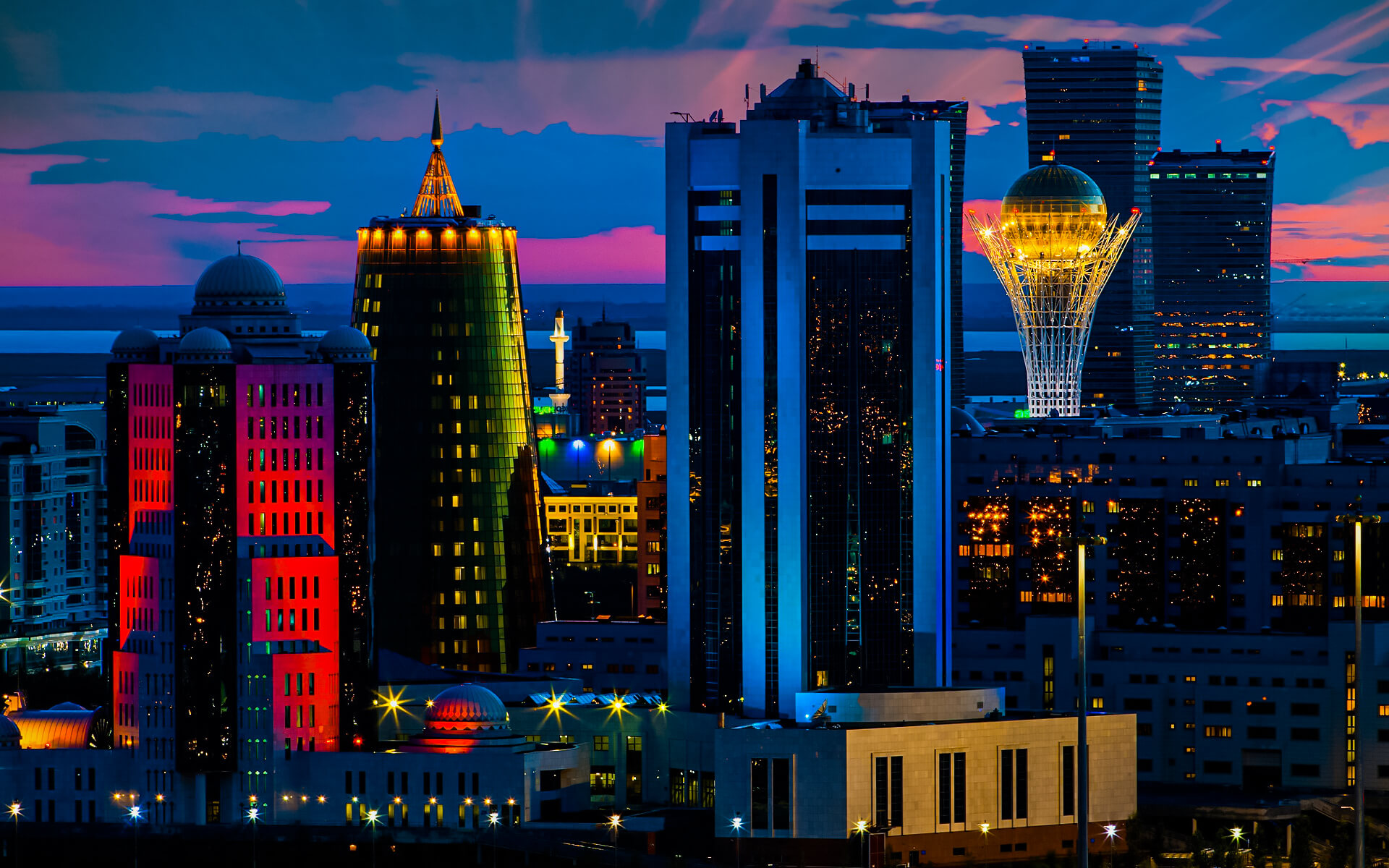 Astana (formerly Aqmola and Tselinograd) is Kazakhstan’s second biggest city, located in the country’s north. In December 1998, it took over as capital city from Almaty (the biggest city).

Now, it is undergoing a multibillion-dollar facelift in which leading international architects are collaborating to make Astana a befitting capital – not just of Kazakhstan, but of all Central Asia.

Kisho Kurokawa, a Japanese architect, devised Astana’s master plan. Astana, Kazakhstan’s capital, is home to the Parliament House, the Supreme Court, the Ak Orda Presidential Palace, and various government offices and institutions. It is home to a plethora of futuristic structures, hotels, and skyscrapers.

Astana offers an unusual combination of historic Soviet buildings and new designs by Norman Foster and others. Astana is expanding, but it still lacks the conveniences and thrills of its Western equivalents, such as Almaty, but it has its own charms and delights.

Bayterek Tower (Бәйтерек, Bäyterek). In the newborn city, an example of futuristic architecture. This 97m high skyscraper, nicknamed Chupa Chups by locals owing to its resemblance to a gigantic lollipop, provides a fantastic perspective of the city as well as an art gallery, an aquarium, and a restaurant. The ever-humbly President Nazarbayev has produced a golden palm print in the center of the top sphere, where visitors may place their own hands. Be aware that at peak hours, the line for the palm might be very lengthy.

Khan Shatyr. Is a massive translucent tent that can house 10,000 people. The 150m-high tent has a 200m elliptical base that covers an area bigger than ten football stadiums, and it includes a park, a retail and entertainment center with squares and cobblestone lanes, a boating river, minigolf, and an indoor beach resort. It even has its own monorail with many stations. While Astana is one of the world’s coldest capitals, with temperatures as low as -40°C in the winter, the translucent material allows sunlight to enter and keeps temperatures pleasant all year.

The President’s Museum of Kazakhstan, Barayev 3. Built in the style of a yurt, with a dome like a mosque. It houses exhibits regarding the country’s history. The major draw is a recreation of the Golden Man outfit, a warrior’s suit discovered in a tomb east of Almaty. It comprises about 4000 gold pieces, and the original was deemed too delicate to be shown (it is now kept safe in the national bank).

Atameken Map of Kazakhstan. An outdoor museum that gives you a small representation of the whole nation. This 1.7-hectare show includes over 200 mock-up items depicting Kazakh towns and historical sites. During the summer months, at least, there are usually English-speaking guides (optional) available if you want to learn more about the models, and there is a covered portion that concentrates on the newest projects inside Astana itself. Taking pictures may necessitate an additional fee, so keep cameras in your luggage until you are out of sight of the main ticket office. On a platform above the remainder of the map, there is a covered map of Astana; make sure to see the exhibition underneath it, which has dioramas representing Kazakhstani industry, sport, and culture.

Palace of Peace and Reconciliation. The pyramid component of the structure is 62 meters tall and is supported by a 15-meter-high earth-covered block. This whole structure is built above ground level. Every 2–3 years, the structure hosts a summit of all global faiths. Though the park’s greenery rises to cover the lowest floors, they are not basements. This structure has two art galleries, an archaeological and anthropological museum, an opera theatre, and a café, as well as a beautiful view of the city.

Duman. An oceanarium, 3D theater, dome area, souvenir shops, and cafés comprise this amusement complex. The aquarium is remarkable in that it is situated almost 3,000 kilometers from the ocean! It is home to about 2000 marine creatures representing 100 different types of sea fauna from throughout the globe. At the aquarium, you can also enjoy “Mermaid” and shark-feeding displays. In the Motion Theatre, you may embark on an undersea adventure with Captain Mac-Cloud during World War II, overcoming traps while rescuing the beautiful princess, being imprisoned in the dungeon, going on a visit to the dinosaur period, being guided by a troll, and so on.

Nur-Astana Mosque. In 2008, the second biggest mosque in Central Asia was constructed.
The dome area incorporates global emblems such as the Monument of Liberty, a section of the Great Chinese Wall, the “Doriphor” statue, the Parthenon, and others.

Kazakh Eli monument. It is located near to the Pyramid (Palace of Peace) and has a miniature monument of Kazakhstan’s first president. It stands around 100 meters tall and is topped by the mythological golden bird Samryk. The monument is composed of white marble and is flanked by stunning fountains.

Shabyt Palace. Shabyt is an artists palace located to the right of the Kazakh Eli monument. It is a glass dish-shaped structure.

Astana is the world’s second coldest capital city, behind Ulaanbaatar, Mongolia, a position formerly held by Canada’s capital, Ottawa, until Astana was designated as a capital city in 1997.

Between the second week of November and the beginning of April, the city’s river is usually frozen over. Astana has a well-deserved reputation among Kazakhs for its frequent high winds, the impacts of which are notably felt in the city’s fast-developing yet somewhat exposed Left Bank district.

Astana is situated on the Ishim River in central Kazakhstan, amid an extremely flat, semi-arid steppe environment that encompasses the majority of the country’s land. It is located at 51° 10′ north latitude and 71° 26′ east longitude, and the 50th parallel north runs through the city’s southern outskirts. The city has a total area of 722.0 square kilometers (278.8 sq mi).

Astana is 347 meters (1,138 feet) above sea level. Because of the Ishim River, Astana is located in a large steppe environment, in the transitional region between Kazakhstan’s north and the highly sparsely inhabited national center. The ancient boroughs are situated north of the river, whereas the new boroughs are south of the Ishim.

The economy of Astana is built on commerce, industrial production, transportation, communication, and construction. The city’s industrial output is mostly centered on construction materials, food, and mechanical engineering.

Samruk-Kazyna, Kazakhstan Temir Zholy, KazMunayGas, KazTransOil, Kazatomprom, KEGOC, and Kazakhtelecom all have their headquarters in Astana.

The capital’s relocation has provided a significant boost to Astana’s economic growth. The city’s rapid economic expansion has attracted a large number of investors. In the 16 years since Astana became the capital, the number of investments has almost tripled, the gross regional product has expanded by 90 percent, and industrial production has climbed by 11 percent.

The Astana – New City special economic zone was formed in 2001 to promote industry and make the city more appealing to investors. In 2015, the SEZ intends to commission five projects totaling 20 billion KZT (about $108 million) in the Industrial Park #1. The projects include the building of a diesel engine plant, a fast food complex, temporary storage warehouses and a business center, a furniture factory, and the manufacture of military and civil engineering apparatus.

There are three mobile phone service companies in Kenya: KCell, Tele2 and Beeline. All three provide mobile web access (Edge, 3G). SIM cards are inexpensive and may be purchased without the completion of any paperwork.

There is a lot of free Wi-Fi accessible.