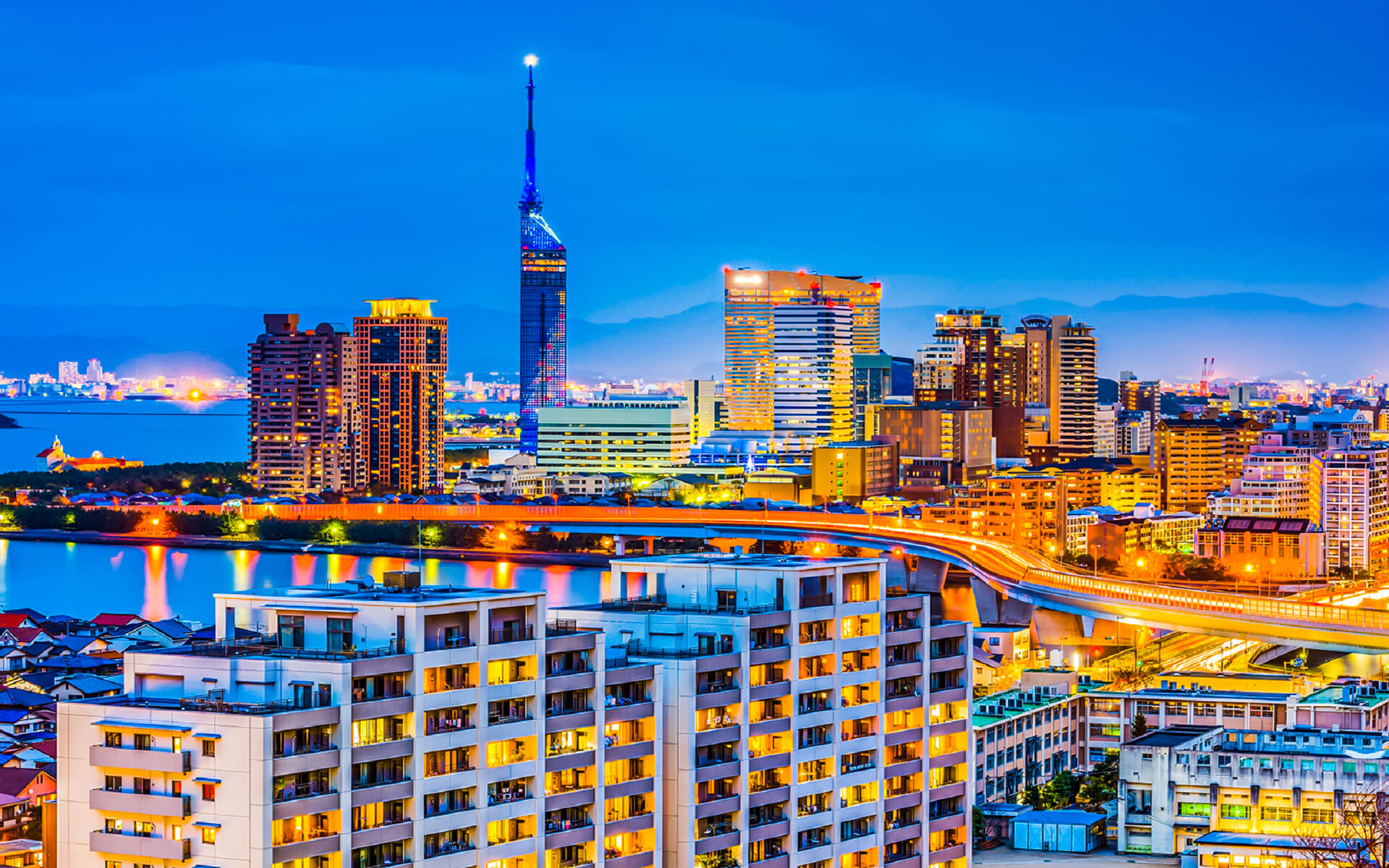 Fukuoka is the capital city of Fukuoka Prefecture and is located on the northern coast of the Japanese island of Kyushu. It is the island’s most populated city, followed by Kitakyushu. It is the most populous city and metropolitan region west of the Keihanshin. The city was established by government law on April 1, 1972. Greater Fukuoka, with a population of 2.5 million (according to the 2005 census), is part of the highly industrialized Fukuoka–Kitakyushu zone as well as Northern Kyushu.

As of July 2011, Fukuoka has surpassed Kyoto in population to become Japan’s sixth biggest city. This is the first time since Kyoto’s establishment in 794 that a city west of the Kinki area had a bigger population than Kyoto. However, some historians believe that the Chikushi region near Fukuoka was even more prominent than the Yamato region in ancient times.

Fukuoka is a contemporary city that was previously split into two independent cities by the center river, Hakata and Fukuoka. The major railway station and port are still referred to as Hakata Station and Hakata Port, respectively. Both Hakata and Tenjin have city cores.

Fukuoka welcomes around 2 million international tourists each year, the most of them come from neighboring South Korea and China. Since the early 2010s, Hakata has benefited from a major increase in cruise ship tourism, mainly from Chinese guests. The number of cruise ship port visits in 2016 is likely to surpass 400 after the expansion and rebuilding of the Hakata Port international passenger ship terminal.

Every year, around ten thousand foreign students attend institutions in or near Fukuoka prefecture. Fukuoka hosts about 200 international conferences each year.

Tenjin has a Tourist Information Center with English speakers located under the Nishitetsu Fukuoka station. Visit the Rainbow Plaza on the 8th level of the Inter Media Station (IMS) building for information in English. The IMS can be reached by subway and is just a three-minute walk from the Tenjin station. There is a Tourist Information Center (occasionally with English speakers) in the centre of Hakata JR railway station, with pamphlets in English, Japanese, and other languages. They can assist with transportation information and reservations. More information in English may be found on the third level of the ACROS building, near Nakasu.

Fukuoka prefecture is made up of the neighboring cities and villages.

For first-time tourists to Japan, Fukuoka is an excellent place to start. Despite being a large, contemporary metropolis, it is not difficult to move about. Most of the city’s major attractions are served by a subway, which runs between Hakata, Tenjin, Fukuoka International Airport, Meinohama, and Nishijin (where you can find Fukuoka Tower and the baseball ground of the Softbank Hawks: Fukuoka Yahoo Dome). The Sanyo Shinkansen bullet train terminates at Hakata’s main station. The Kyushu Shinkansen line also finishes here, connecting the Sanyo Shinkansen directly with Kagoshima, on Kyushu’s southernmost point.

Fukuoka has a humid subtropical climate, with hot, humid summers and moderate winters. The city also receives roughly 1,600 mm (63 in) of precipitation per year on average, with a period of heavier precipitation between June and September. Fukuoka City, like most of the prefecture, has a temperate climate with an annual average temperature of 16.3 °C (61 °F), an average humidity of 70%, and 1,811 yearly sunshine hours. Approximately 40% of the year is overcast.

Winter temperatures seldom dip below 0 °C (32 °F), and it rarely snows, however mild rain does occur on most days, although not as frequently as on Honshu’s Sea of Japan side. Spring is brighter and warmer, with cherry blossoms blooming in late March or early April. The rainy season (tsuyu) lasts around six weeks in June and July, when humidity is quite high and temperatures range between 25 °C (77 °F) and 30 °C (86 °F). Summers are humid and hot, with highs of roughly 37 °C (99 °F). Autumn, which is commonly regarded as Fukuoka’s greatest season, is moderate and dry, while the typhoon season lasts from August to September.

Fukuoka is the economic heart of the Kyushu region, having a mostly service-based economy. Iwataya and Kyushu Electric Power are two major corporations with headquarters in the city. Fukuoka is also home to numerous small businesses that contribute to the logistics, information technology, and high-tech manufacturing industries. The majority of the region’s heavy industry takes place in Kitakyushu, a neighbouring city. Greager Fukuoka, FukuokaMetropolitan Employment Area, with a GDP of US$ 101.6 billion in 2010.

The Hakata port and Fukuoka Airport both contribute to the city’s importance as a regional transportation hub. Kyushu Railway Company (JR Kyushu) and Nishi-Nippon Railroad have their headquarters in Fukuoka. Air Next, an All Nippon Airways subsidiary, is located in Hakata-ku; before to its demise, Harlequin Air was also headquartered in Hakata-ku.

Fukuoka has its own stock market, which was established in 1949. It is one of just six in Japan.