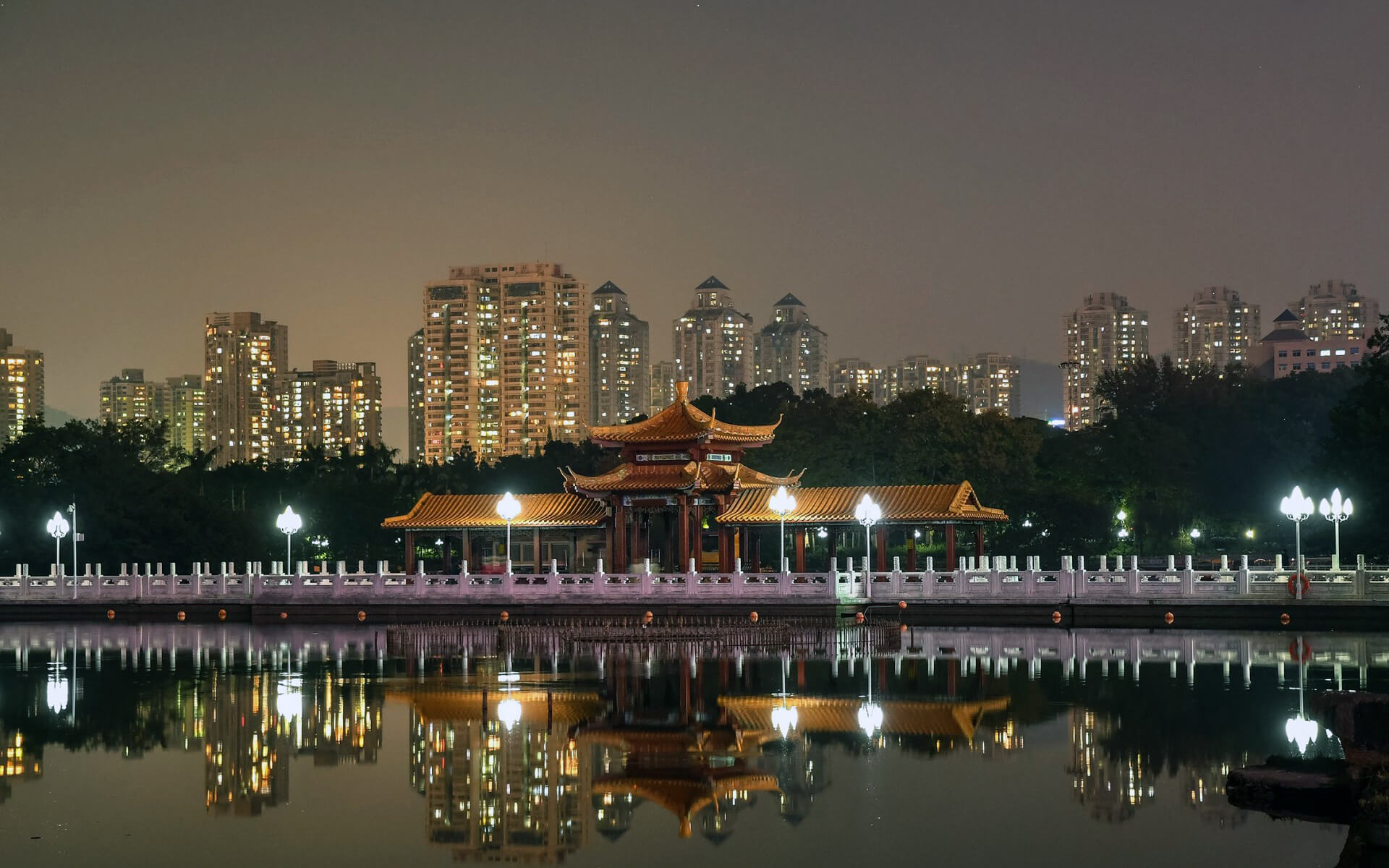 Shenzhen is a prominent city in China’s Guangdong Province. Shenzhen is situated just north of the Hong Kong Special Administrative Region. It presently has sub-provincial administrative status, having significantly less powers than a province.

Shenzhen was a 30,000-person market town on the Kowloon–Canton Railway line. That changed in 1979, when Shenzhen was elevated to the rank of city, and in 1980, when it was named China’s first Special Economic Zone (SEZ). According to the 2015 Government report, Shenzhen has grown to a city with a population of 10,778,900 and a metropolitan area population of more than 18 million people. During the 1990s and 2000s, Shenzhen was one of the world’s fastest-growing cities. By 2013, Shenzhen’s population growth had slowed to fewer than one percent per year, as the industrial boom had waned in favor of other sectors.

Shenzhen’s contemporary cityscape is the product of its thriving economy, which has been made possible by fast foreign investment since the implementation of the “reform and openness” program and the founding of the SEZ in late 1979. Both Chinese people and international nationalities have invested significant amounts of money in the SEZ. More than $30 billion in foreign investment has gone into both foreign-owned and joint ventures, first mostly in manufacturing but more recently in service sectors as well.

Shenzhen is a prominent financial hub in China’s south. The city is home to the Shenzhen Stock Exchange as well as the headquarters of a number of high-tech firms. Shenzhen is ranked 19th in the 2016 edition of the Z/Yen Group and Qatar Financial Centre Authority’s Global Financial Centres Index. It also boasts one of the world’s busiest container ports.

Shenzhen, then a collection of agricultural and fishing villages near the Hong Kong border with a population of a few hundred thousand, was named the first of China’s Special Economic Zones in 1979. (SEZs). The goal was to construct a closed-off enclave to experiment with market reforms and performance incentives without endangering China’s established political and economic framework. Shenzhen was chosen for the award because of its closeness to Hong Kong’s substantial financial resources and managerial experience. It has been a genuine boom town since then, and it is now a busy 14-million-person metropolis.

According to a 2010 Forbes magazine research, Shenzhen has the world’s fifth greatest population density. Shenzhen also has the greatest per capita GDP in China, with an astounding USD 13581 in 2009, albeit this is frequently debated owing to the way by which the population statistic is calculated. Many analysts, however, argue that, given the prevalence of privately owned enterprises in Shenzhen and rampant tax dodging, the GDP number is also likely to be significantly overstated. A stroll through Shenzhen’s verdant western suburbs will soon dispel any concerns about the city’s affluence.

Although few foreign visitors visit Shenzhen, it is a popular destination for Chinese domestic travelers. They were first lured by the city’s famed amusement parks, but as the city has grown and become more prosperous, they have been more enticed by Shenzhen’s famous architecture, shopping, pubs, restaurants, and vibrant art scene. The beaches in Shenzhen have become well-known across China. The Dapeng Peninsula, home to Shenzhen’s nicest beaches, was named one of China’s most beautiful coastlines by the China National Geographic Magazine in 2006. Visitors are also beginning to notice several intriguing historical sites spread across the suburbs, notably those relating to the Hakka culture and Hong Kong’s annexation during the Opium Wars.

From an environmental standpoint, the ideal time to visit Shenzhen is from October to December, when the weather is favorable. Shenzhen has a subtropical climate with very high humidity and scorching summer temperatures. This is a season that many people want to avoid. The long, hot summer also overlaps with the typhoon season, which lasts from June to October. Spring is cooler, although it is often plagued by fog and strong thunderstorms.

The issue of Shenzhen’s population is a contentious one. Official Chinese population numbers have typically been influenced by the fact that people with official registration or “hukou” in the city are used as the foundation for reporting. Because Shenzhen has a large number of immigrant employees whose hukou are for their home town or village, “official” figures are very low. A step forward in this regard happened a few years ago, when “hukou” was replaced with a residents’ registration certificate for practical reasons. This certificate, which is inexpensive and simple to administer and enables for travel to Hong Kong without returning to one’s place of origin to apply for a passport, has simplified population counts. According to the Shenzhen Statistics Bureau, as of the end of 2009, Shenzhen has an official resident population of 8.91 million, of whom 2.41 million have legal household (hukou) status. The official Family Planning Bureau, which uses police registration data, estimates the population to be 14 million. It is worth noting that, unlike Shanghai and Beijing, which have sizable rural populations, Shenzhen’s population is entirely urban.

Despite being around a degree south of the Tropic of Cancer, Shenzhen has a warm, monsoon-influenced, humid subtropical climate owing to the Siberian anticyclone. Winters are moderate and generally dry, thanks in part to the influence of the South China Sea, and frost is very unusual; it starts dry but gradually gets more humid and gloomy. Fog, on the other hand, is most common in the winter and spring, with 106 days a year reporting some fog. Early spring is the cloudiest period of year, with rainfall beginning to rise rapidly in April; the rainy season lasts until late September to early October. The monsoon reaches its greatest strength during the summer months, when the city also has highly humid and hot, but tempered, weather; there are only 2.4 days with temperatures of 35 °C (95 °F) or higher. The area is also prone to heavy rain, with 9.7 days receiving 50 mm (1.97 in) or more of rain, and 2.2 days receiving at least 100 mm (1.97 in) (3.94 in). The end of October is hot and dry. Annual precipitation averages roughly 1,970 mm (78 in), with part of it supplied by typhoons that hit from the east throughout the summer and early fall. Extreme temperatures have varied from 0.2 degrees Celsius (32 degrees Fahrenheit) on 11 February 1957 to 38.7 degrees Celsius (102 degrees Fahrenheit) on 10 July 1980.

Shenzhen is situated in the Pearl River Delta, bordered to the south by Hong Kong, to the north and northeast by Huizhou, and to the north and northwest by Dong Guan. To the west are Lingding Yang and the Pearl River, while to the east is Mirs Bay. The municipality has a total area of 1,991.64 square kilometers (769 square miles), combining urban and rural regions, with a population of 10,358,381 according to the 2010 census. It is part of the Pearl Delta River Mega City built-up region, which has 44,738,513 residents scattered throughout 9 municipalities (including Macao) and 17,573 square kilometers. The city is 81.4 kilometers long from east to west, with the smallest part from north to south being 10.8 kilometers.

Originally, the city was built on a hill with rich agricultural land. However, after becoming a Special Economic Zone in 1979, Shenzhen’s terrain changed dramatically. In the early 1980s, the majority of these minor hills were flattened. Shenzhen is witnessing a second stage boom as a result of the flood of migrants from interior China, and it is now growing peripherally, with hills in adjacent places such as Mission Hills still being flattened to make room for further construction.

Shenzhen is crossed by around 160 rivers or waterways. Sham Chun River, Maozhou River, and Longgang River are notable examples. Within the municipal borders, there are now 24 reservoirs with a combined capacity of 525 million tonnes.

Shenzhen’s GDP was $270 billion in 2015, placing it on par with a mid-sized province in terms of overall GDP. It has a larger overall economic production than Portugal, the Republic of Ireland, and Vietnam. As of 2014, its per-capita GDP was 164,664 ($25,038), on par with several OECD rich nations. Shenzhen was the first of the Special Economic Zones to be founded, and it saw the most rapid development, averaging a 40 percent annual growth rate between 1981 and 1993, compared to the country’s average GDP growth of 9.8 percent. After this early fast rate, economic development eased; from 2001 to 2005, Shenzhen’s total GDP expanded by 16.3 percent per year on average, however growth has fallen to roughly 10 percent per year since 2012. In terms of overall economic power, Shenzhen ranks first among mainland Chinese cities. Shenzhen’s economic production ranks fourth among China’s 659 cities (behind Beijing, Shanghai and Guangzhou).

In 2001, the working population totaled 3.3 million people. Though the secondary sector had the greatest proportion (1.85 million in 2001, up 5.5 percent), the tertiary sector is rapidly expanding (1.44 million in 2001, increased by 11.6 percent ). In 2009, the share of GDP contributed by the three industries was 0.1:46.7:53.2. The primary sector’s share of GDP fell by 13.4 percent, while the tertiary industry increased by 12.5 percent. Its import and export volumes have been the highest for the past nine years in a row. In terms of industrial production, it ranks second. For the last five years, its internal income inside the municipal budget has ranked third. It is also ranked third in terms of the utilisation of foreign capital.

Shenzhen is a prominent Chinese industrial hub. In the 1990s, Shenzhen was said to be building “one high-rise per day and one boulevard every three days.” Shenzhen’s skyline is often recognized as one of the greatest in the world. It now contains 59 structures taller than 200 meters, including the Kingkey 100 (the world’s 14th tallest skyscraper) and Shun Hing Square (the 19th tallest building in the world).

Shenzhen, because of its unique position, is also a highly fruitful field for startups, whether run by Chinese or international entrepreneurs. Petcube, Palette, WearVigo, Notch, and Makeblock are examples of successful companies. Shenzhen is also the headquarters of the hardware startup incubator HAX Accelerator (formerly HAXLR8R).