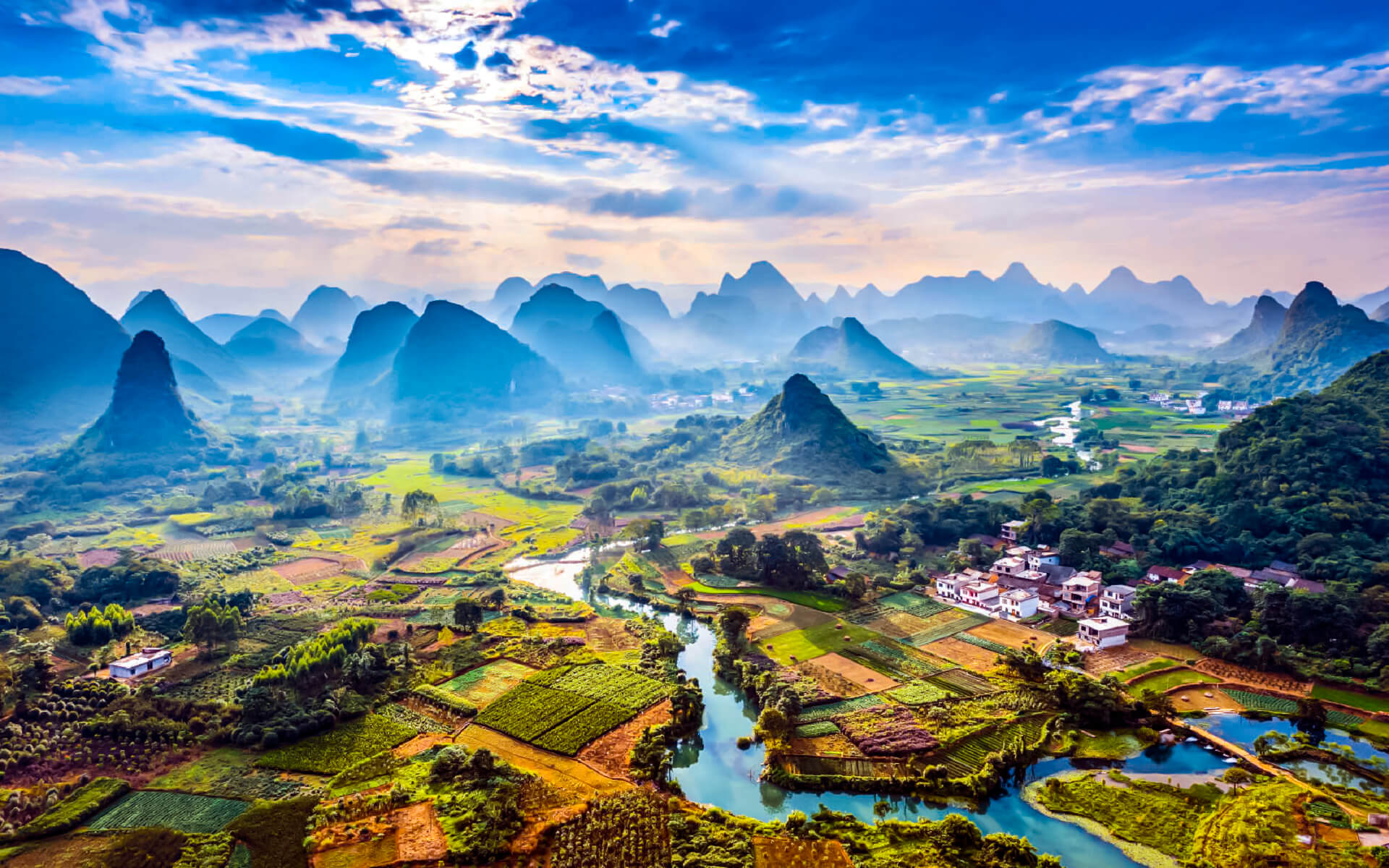 travel guide
Share
Facebook
Twitter
Pinterest
ReddIt
Tumblr
Table Of Contents
1. Guilin | Introduction
2. How To Travel To Guilin
3. How To Get Around In Guilin
4. Districts & Neighbourhoods In Guilin
5. Prices In Guilin
6. Sights & Landmarks In Guilin
7. Museums & Galleries in Guilin
8. Things To Do In Guilin
9. Food & Restaurants In Guilin
10. Coffee & Drinks in Guilin
11. Shopping In Guilin
12. Nightlife In Guilin
13. Stay Safe & Healthy In Guilin

Guilin is a prefecture-level city in the northeast of China’s Guangxi Zhuang Autonomous Region, on the west bank of the Li River, bordering Hunan to the north. Its name means “Forest of Sweet Osmanthus,” referring to the city’s abundance of fragrant Sweet Osmanthus trees. The city has long been known for its karst landscape, and it is one of China’s most popular tourist sites.

Guilin and the surrounding region are among China’s most picturesque places, as well as one of the most popular tourist sites for both Chinese and foreign backpackers. The major draw is the karst environment, which consists of limestone mountains that have worn into amazing patterns. Aside from its stunning aesthetic grandeur, karst topography offers several cliffs suited for rock climbing as well as many caves.

There are several gorgeous spots within a short driving distance of Guilin. Longsheng, with its famed Longji rice terraces; the Lijiang River, a view of which is depicted on the reverse of 20 bank notes; Yangshuo, a tiny county downstream from Guilin; and many more are among them. As a result, Guilin is a good starting point for visiting the northern end of Guangxi Province.

Guilin is a lovely city. The town center is surrounded by two rivers and four lakes, as well as sheer-sided karst mountains. Buildings outside of the city center are less properly maintained. Because tourism is the city’s major industry, it is significantly cleaner than other Chinese cities.

Apart from having a high number of western-style hotels, visitors, and being relatively free of air pollution, Guilin is similar to most other medium-sized Chinese cities. Many Chinese domestic visitors visit this location as well. Its uniqueness stems from its closeness to several attractive limestone mountains and formations.

Guilin has a humid subtropical climate influenced by the monsoon, with short, mild winters and long, hot, humid summers. Winter starts dry but gradually grows wetter and cloudier. Spring is often gloomy and frequently wet, although summer is still rainy despite being the sunniest season. Autumn is bright and dry. The monthly 24-hour average temperature varies from 7.9 °C (46.2 °F) in January to 28.0 °C (82.4 °F) in July, with an annual average temperature of 18.84 °C (65.9 °F). The annual rainfall is little over 1,900 mm (75 in) and is distributed in bulk (50 percent) from April to June, when plum rains occur and often cause floods. The city gets 1,487 hours of bright sunlight each year, with monthly percent potential sunshine ranging from 14 percent in March to 53 percent in September.

Guilin lies in northern Guangxi, bordered by Liuzhou to the west, Laibin to the southwest, Wuzhou to the south, Hezhou to the southeast, and inside Hunan, Huaihua to the northwest, Shaoyang to the north, and Yongzhou to the east. It covers an area of 27,809 square kilometers (10,737 sq mi). Karst formations dominate the area’s landscape. The city is traversed by the Li River.

Until 1949, the only traces of industrialisation in Guilin were a thermal power plant, a cement factory, and a few modest textile mills. Guilin, on the other hand, has had enterprises producing electronics, engineering and agricultural equipment, medicine, rubber, and buses since the 1950s, as well as textile and cotton yarn. The most significant sector is food processing, which includes the processing of local agricultural goods. The most recent and contemporary industries are defined by high technology, while the tertiary sector is characterized by tourist commerce and service.

How To Travel To Guilin

Guilin Liangjiang International Airport (KWL) is served daily by flights from major mainland cities and some other international cities in East and Southeast Asia.

Air Asia offers flights every other day from Kuala Lumpur to Guilin.

Jetstar flies twice a week from Singapore to Guilin.

The bus from the airport to the city costs ¥20, but it leaves from the south of the city center, from where you can take a cab for about ¥10 to most hotels. The bus only leaves when it is full, so there may be a wait when the bus fills up.

A direct cab from the airport to a downtown hotel costs about ¥100. For the return trip to the airport, a hotel can arrange the trip for ¥80.

As soon as you leave the station, cab drivers and other drivers will accost you indifferently. Although cab drivers are trustworthy, they may use some tricks to cheat you of a few yuan, such as aggressively imposing rides or adding fake charges to the bill. Another option is to take the public bus No. 100 to the city center for 1 RMB.

From Guangzhou, it is possible to go to Guilin by cargo boat via Wuzhou, but there are no more passenger boats to Guilin, except for the boats to and from Yangshuo. If you want, you can take a cargo boat from Wuzhou to Yangshuo almost for free.

How To Get Around In Guilin

It is a good idea to get a city map for ¥5 from a guidebook or a store. Most of the tourist sites are indicated, as well as the bus routes. Buses are an ideal way to get around Guilin at a low cost. Many city parks and river banks are easily accessible by bus. All buses starting with 5# are free. A useful bus is route 58, which leaves from the railway (and bus) station and serves many tourist sites. The fare is limited to ¥1 per trip.

Another economical option for a day trip to scenic spots in the Guilin urban area is to hire a driver for a full day or half day. From March 2012 (low season), a full day costs about ¥100 and a half day costs ¥50. Most hotels or hostels offer this service, and it is possible to tell the driver where you want to go if you do not speak Chinese.

Parks in the city

Landscape close to the city centre

Parks and landscape outside the city centre

Nearby towns and villages

Things To Do In Guilin

Guilin’s cuisine is influenced by Cantonese and Hunanese cuisine, but it uses more fish and spices and is often prepared by pan-frying or steaming. Restaurants often assume that Westerners don’t like spicy food and make your meal pretty bland if you don’t insist. Even then, chances are you won’t be believed.

In Guilin, some special local ingredients are used in a variety of dishes.

Like many other Chinese cities, Guilin also has its own snack bars.

There are a number of dishes that can only be found in Guilin or that are particularly famous here.

There are restaurants all over the city. Near the train station, there are several establishments that offer cheap and simple, but delicious local food. The main streets, Jiefang Road and along the river have many restaurants, but many of them are either overpriced chains and/or tourist traps, and the food they serve is not very authentic. Don’t be fooled by the fact that they are crowded, they are not worth it. A better option is to stroll the side streets.

There are a number of restaurants worth discovering.

There is a large underground bazaar that stretches from the train station to the bus station and sells clothes, shoes, accessories, bags and more. The second underground market is located underneath the city center and sells food, bags, cell phones and other electronics. Be sure to haggle if prices are not openly displayed.

Brand name luxury goods can be purchased at department stores located near Cross Street. Suncome has many stores throughout the city that sell everyday goods.

On Zhongshan Lu there is also a street market at night, where typical tourist decorations are sold.

Guilin is quite safe by both Chinese and international standards, but still:

Tanzania, formally known as the United Republic of Tanzania, is a vast nation in Eastern Africa that is part of the African Great Lakes...
Read more

Kinshasa (Leopoldville) is the Democratic Republic of the Congo’s capital and biggest city. It’s on the banks of the Congo River. Kinshasa, formerly a fishing...
Read more

Mendoza is the capital of Argentina’s Mendoza province. It is situated in the province’s northern-central section, on the eastern side of the Andes, amid...
Read more

Chad is a landlocked country in northern Central Africa. Its official name is the Republic of Chad. It is bounded to the north by...
Read more

San Felipe de Puerto Plata, sometimes known as Puerto de Plata, is the ninth-largest city in the Dominican Republic and the seat of the...
Read more

Trabzon is the capital of Trabzon Province and a city on the Black Sea coast of northeastern Turkey. For centuries, Trabzon, situated on the...
Read more
Tourist attractions