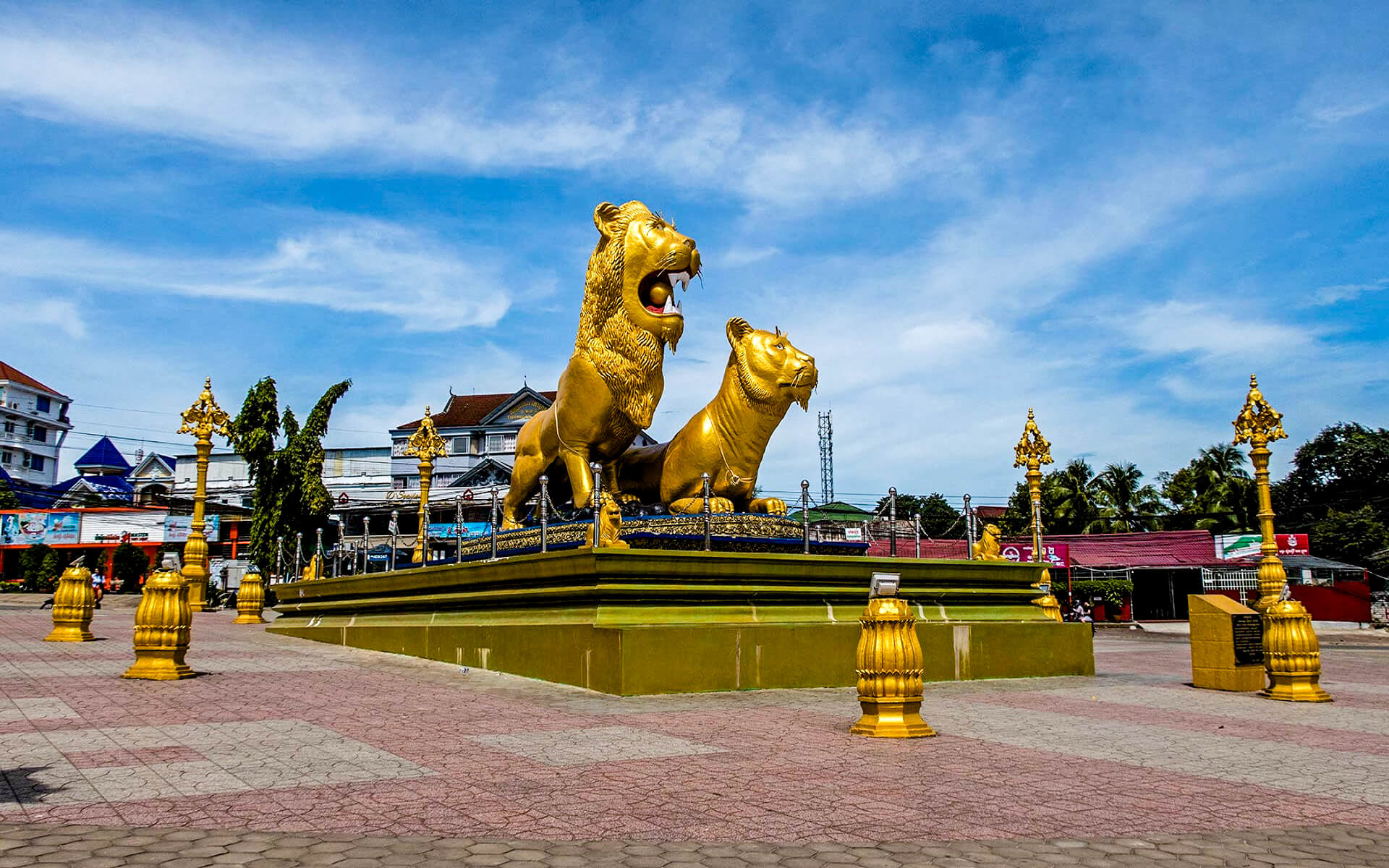 Sihanoukville, commonly known as ‘Kompong Som’ (Khmer: កំពង់សោម), is a seaside city in Cambodia and the seat of Sihanoukville Province. It is situated at the point of an elevated peninsula in Cambodia’s south-west at the Gulf of Thailand.

The city is surrounded by a virtually continuous stretch of beaches along its entire coastline, as well as coastal marshlands that border the Ream National Park to the east. A number of sparsely populated islands — administered by Sihanoukville – are close to the city, and in recent years, modest growth has helped to draw a substantial share of Asia’s individual travelers, young students, and backpackers.

In 2008, the city, named for former King Norodom Sihanouk, had a population of around 89,800 people, with an urban population of approximately 66,700. Sihanoukville city includes the majority of four of the five communes (Sangkats) in the Mittakpheap District of Sihanoukville province. It is a young city that has grown in tandem with the development of the Sihanoukville Autonomous Port, which began in June 1955 as the country’s entrance to direct and unrestricted international sea commerce. Cambodia’s sole deep-water port comprises a mineral oil terminal and a transportation logistics center. As a result, the city expanded to become a major national hub for trade, commerce, transportation, and process manufacturing.

Sihanoukville’s many beaches and neighboring islands have made it Cambodia’s leading seaside resort, with continuously increasing numbers of national and foreign visitors since the late twentieth century. A continually rising number of seasonal and permanent foreign inhabitants make Sihanoukville one of Cambodia’s culturally most diverse and dynamic population centers, owing to its economic variety, natural beauty, and significant recreational possibilities. In compared to neighboring Thailand, the tourist industry remains tiny as of 2014. The ability of the authorities to successfully balance management in order to protect and conserve natural resources on the one hand and the necessities of island – and urban development, increasing visitor numbers, expanding infrastructure, the industrial sector, and population growth on the other will largely define Sihanoukville’s future.

Sihanoukville, with about 150 conventional hotels in all price ranges and an unspecified number of guesthouses, can comfortably accommodate existing tourist quotas and can typically meet all standard expectations. As of 2016, the islands have more than enough lodging options, ranging from low-cost guesthouses and bungalows to an international 5-star resort. Despite these qualities, the city and its surrounding area are still regarded as under-explored by international visitors. To adequately handle the expected increase in tourists, Sihanoukville’s infrastructure would need to be upgraded on a vast scale.

Sihanoukville is a colorful but sad upstart in a nation with thousands of years of history. A combined French-Cambodian initiative excavated a camp out of the bush and began construction on Cambodia’s first deep-sea port fifty years ago. The thriving port and its beautiful beaches quickly lured Cambodia’s jet-setting elite, generated the first Angkor brewery, and spawned the modernist seven-story Independence Hotel, which locals allege hosted Jacqueline Kennedy on her whirlwind tour of Cambodia in 1967.

Unfortunately, the party came to an end when Sihanouk was toppled in a coup and Cambodia sank into civil war in 1970. The town, renamed Kompong Som, quickly ran into financial difficulties. The triumphant Khmer Rouge used the Independence Hotel for target practice, and the port was attacked by the US Air Force when they kidnapped an American cargo ship. Even after Pol Pot’s dictatorship was deposed, the hilly road to the city was known for banditry, and the beaches remained deserted.

Peace returned in 1993, after historic elections organized by the United Nations Transitional Authority in Cambodia (UNTAC), and Sihanoukville has been busy cleaning up the pieces in the 10 years since. Guide books still mention bullet-scarred walls, but any evidence of conflict are difficult to find in today’s Sihanoukville, whose new icon seems to be the building site. After 30 years of housing only ghosts, the Independence Hotel is back in business, more Khmers and expatriates are settling here to open bars and restaurants, and word of what the New York Times termed “Asia’s next trendsetting beach” is spreading.

Because Snooky is a relatively young city (1950), it evolved with the steady expansion of tourism, and all of the bad characteristics came with it. After 21:00, it is not safe (even for males) to stroll alone on the beach; there are many glue sniffing youngsters, java (methamphetamine) smoking girls and boys, and a price-fixing tuk-tuk cartel.

Sihanoukville has a tropical monsoon (Am) climate. There are two seasons in the city: rainy and dry.

The highest mean temperature is about 30 °C, while the lowest mean temperature is around 24 °C. Maximum temperatures of more than 32 °C are typical, and they may reach more than 38 °C right before the rainy season begins. In January, the coldest month, minimum night temperatures may dip below 20 °C. May is the hottest month, albeit it is heavily impacted by the start of the rainy season, since the location lies on the easternmost edge of the south-west monsoon. Tropical cyclones produce very infrequent damage in Cambodia.

The average yearly rainfall is between 1,000 and 1,500 millimeters (39.4 and 59.1 in). The highest levels are recorded in August and September. Throughout the year, relative humidity is high, sometimes surpassing 90%. During the dry season, daily humidity levels average approximately 50% or slightly lower, increasing to over 90% during the rainy season.

Sihanoukville is situated at the extremity of a peninsula in the Gulf of Thailand, surrounded by undulating hills. It climbs up to 15 metres (49 feet) above sea level in the north-west and center, then gradually flattens out to broad coastal plains, marshlands, and beaches in the south and south-east. These hills, which give a wide range of housing options as well as excellent views of the coastal plains, beaches, sea, and islands, define the region’s natural character and value. Another appealing feature is the Gulf of Thailand’s shallow depth and mild temperature, in contrast to the South China Sea to the east and the Indian Ocean to the west, where taifuns and monsoonal extremes are constant threats.

Sihanoukville is distinct from other Cambodian metropolitan centers due to its clearly defined mission, its short but stormy past, and its location. There are no bourgeoiscolonial type quarters in Kampot, Siem Reap, or Phnom Penh, which were established following the era of the French Protectorate. Modern ideals of reduction and utility are applied to architecture and street planning. Vann Molyvann, a well-known Cambodian architect, created attractive items, public structures with specific functions, some of which are still in use. This short phase of New Khmer Architecture came to an end in 1970, with inconsistency and disorder throughout the city’s protracted civil conflicts having a considerably bigger influence on the city’s present image.

The city’s original urban plan, anticipating a population of 55,000 people, was finished in 1959, and it contained cycling routes and green areas. The design features precisely delineated zoning for the port, the railway network, the town center with municipal offices, commercial and residential buildings, and a tourism zone to the south along the beaches. The United States Operations Mission (USOM) conducted a feasibility assessment on drawing additional water supply from the Prek Tuk Sap and existing lagoons, which were then upgraded (closed off from the sea) and utilized as the first source for town supplies. The reservoirs are still operating, however they are inadequate to meet current needs.

The years of upheaval that followed ensured that just a small portion of the original plan was carried out. The present condition of structural irregularity is a result of decades of upheaval, since layout design was never a matter of aesthetics and practical sciences.

A modest grid of streets extends from the port up to Weather Station Hill (Victory Hill) and along the local (Victory) beach. One of the few places in town that seems to have been designed in advance is the area between the National Bank building and the Victory Beach Pier. The region is linked to the city center by a single roadway via typical uneven successions of residential structures devoid of distinguishing characteristics and monuments. These roads were built to link the few and widely separated genuine village foundations. Because of a one-dimensional infrastructure, the communities lack closeness. The city’s core is a series of alternating single blocks of solid urban edifices such as banks, middle-class hotels, gas stations, pharmacies, Chinese bakeries, and electronic retailers, followed by long rows of low-end food stalls, makeshift shops, motor-bike repair services, mini-markets, laundry, gas, lock-picking services, and mobile phone shops.

The business imperatives of the international port and its adjoining oil terminal define the economy of Sihanoukville City. A cargo storage and logistics facility that is continually upgraded serves multiple shipping firms, freight forwarders, suppliers, and maintenance contractors. All of these are located near the harbor.

Other significant economic areas in the city include fisheries, aquaculture, and frozen shrimp processing, the textile industry, food production (the Angkor brewery), the massive tourist business with its ever-expanding service branch, and the resultant real estate boom.

The area code for Sihanoukville is 034.

There are several Internet cafés, as well as some guesthouses and hotels, that provide Internet connection. Many now offer Wi-Fi, some of which is free.

The new main Post Office sits on the left side of the road as you approach Victory Hill, near Victory Park. There is also a branch in the market downtown, however you may only leave your postcards here during office hours because there is no exterior mailbox.