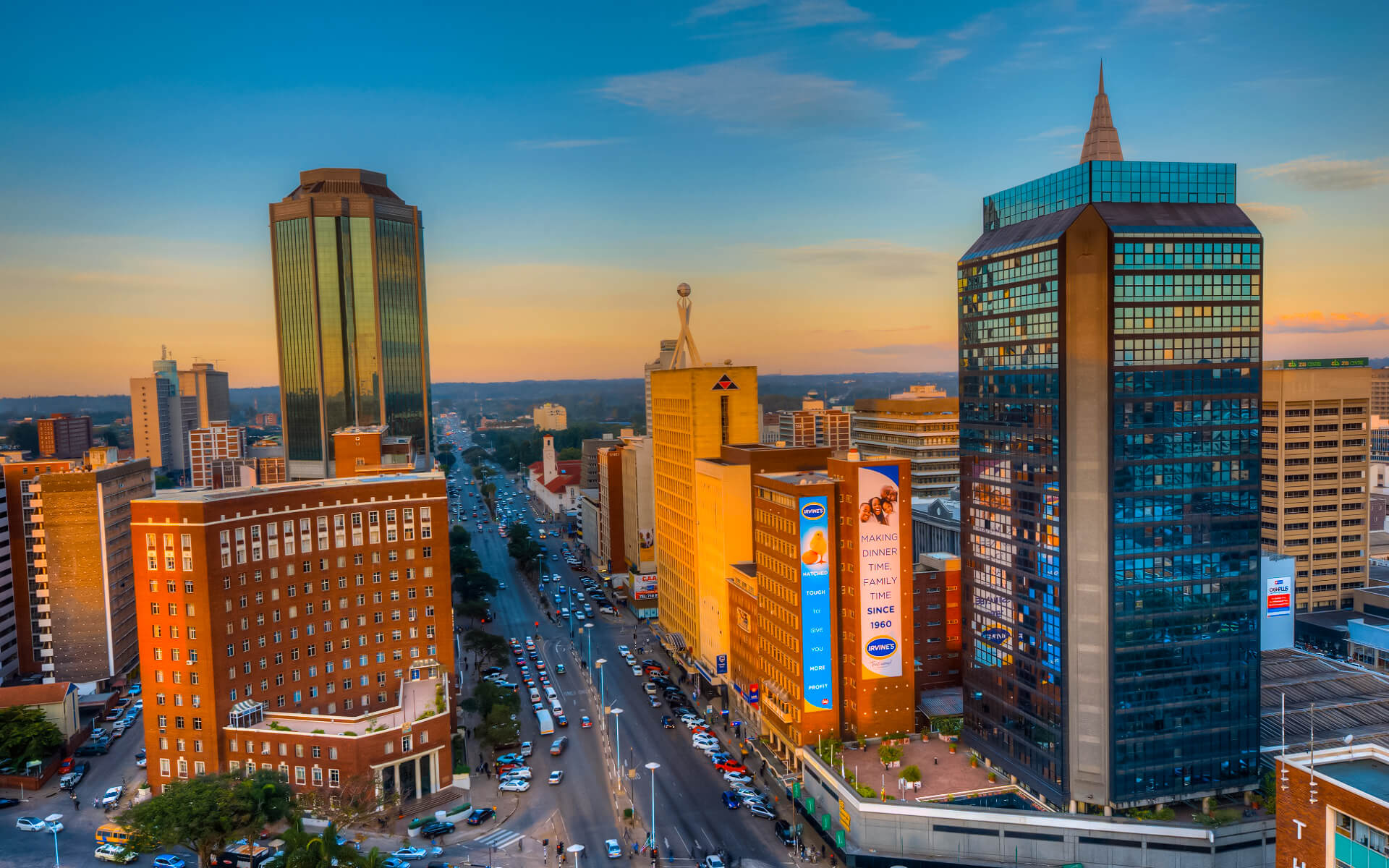 travel guide
Share
Facebook
Twitter
Pinterest
ReddIt
Tumblr
Table Of Contents
1. Harare | Introduction
2. How To Travel To Harare
3. How To Get Around In Harare
4. Prices In Harare
5. Sights & Landmarks In Harare
6. Food & Restaurants In Harare
7. Coffee & Drinks In Harare
8. Shopping In Harare
9. Nightlife In Harare

Harare, once known as Salisbury until 1982, is Zimbabwe’s capital and most populated city.

It is located in the north-east of the nation, in the heart of old Mashonaland, and has a population of over two million people, the most of whom live in downtown Harare, but another 500,000 in the neighboring districts of Rural Harare, Chintungwiza, and Epworth.

Once a metropolis of contemporary buildings, broad thoroughfares, and several parks and gardens, it has fallen into growing disrepair as a result of Zimbabwe’s economic downturn. However, there have been some indications of recovery lately, as the country’s decision to adopt the US dollar as its currency has started to allow certain investments.

The city’s cultural and historical history is highly valued, and many of its older structures have been maintained. Many examples can be seen along Robert Mugabe Road between Second Street and Julius Nyerere Way, including the Mining Pension Fund Building between Central Avenue and Second Street.

The Book Cafe has a variety of live music throughout the week, and there is an Afro-jazz club immediately next door.

All purchases at bigger shops are done in US dollars, the country’s currency.

Everything created locally is cheap. Zimbabwe smokes cost $0.50 per pack (as of April 2010). In comparison to South Africa, everything imported is relatively pricey. Coca-Cola cans, for example, often cost $1.

Harare is blessed with a lovely subtropical highland climate.

The average annual temperature is 17.95 °C (64.3 °F), which is quite low for the tropics owing to its high height and the predominance of a cool south-easterly breeze.

The climate supports open forest vegetation in its native state. The most frequent tree in the area is the Msasa Brachystegia spiciformis, which turns the landscape wine crimson in late August with its new leaves. Two South American tree species, the Jacaranda and the Flamboyant, imported during the colonial period, add to the city’s color pallet, with streets lined with either the Jacaranda’s lilac flowers or the Flamboyant’s blazing red blooms. They bloom in October/November and are planted on off-the-beaten-path streets across the metropolis. Bougainvillea is also common.

Internet access is accessible in hotels and at one or two internet cafés, although it is sluggish and inconsistent.

Cell phone coverage is adequate in and around Harare. SIM cards are inexpensive and widely available. However, there may be issues with international calls. International landline calls remain unstable as well.

How To Travel To Harare

Harare International Airport is the country’s main entry point. Prior to discontinuing operations, Air Zimbabwe also operated a modest network of domestic flights. However, a growing number of international airlines are already flying into Harare. South African Airways, for example, has direct flights from Johannesburg.Ethiopian Airlines from Addis Ababa,Kenya Airways from Nairobi, TAAG Angola Airlines from Luanda and Egypt Air from Cairo via Dar es Salaam andKLM from Amsterdam.

The cost of a taxi from the airport to the major hotels is $25. The drivers blame the enormous costs they have to pay to the airport administration for the exorbitant fixed pricing, which is justified considering the small distance and age of the taxis.

Bulawayo has three weekly departures at 8 p.m., with arrivals at 8 a.m. A sleeper costs $12 and a seat costs $10. Trains travel three times a week from Mutare, near the Mozambique border, departing Mutare at 9 p.m. and arriving in Harare at 6 a.m. The cost of a first-class sleeper is $7. The cost of a 2nd class sleeper is $5. There are no international trains to Harare at the moment, save for the odd cruise trains.

From Johannesburg, buses ranging from Eagle Liner to Greyhound are readily available (for R330). Intercape (for R450) and Greyhound (R420). The bus journey takes anything from 16 to 24 hours. Delays at the border are common and normally last 3-8 hours, although they can go up to 20 hours around the holidays.

Buses go from Harare to Mutare, Masvingo, Gweru, and Bulawayo by Intercape, which has the largest intercity network in southern Africa.

The Mbare Terminal, 3 kilometers southwest of the Central city, is where most typical long-distance bus services arrive. The terminal itself is enormous, chaotic, perplexing, and even hazardous. The station is divided into various sections, and even locating a cab might take up to 500 meters of wandering through marketplaces and lanes. Although minibuses to Mbare depart from Central’s 4th Street Terminal (located at 4th and Mugabe), a taxi may be more cost-effective in finding a bus to your destination.

The modern Roadport terminal at 5th and Mugabe is where “luxury” buses (such as Eagle Liner, Greyhound, and Intercape) arrive and depart.

Easy access is provided by an excellent route from Johannesburg. However, be cautious of the occasionally terrifying dips along the side of the road, near the tarmac’s edge, especially at night with incoming vehicles. In fact, driving at night is not recommended.

How To Get Around In Harare

Harare is a large city with a lot of different neighborhoods. The best way to get around is by car, which is even easier now that currency depreciation has eliminated fuel shortages. Most outlets have free fuel, which may be purchased with cash or through a coupon system. The majority of operators now import their own fuel and set their own prices. The majority of service stations close around p.m., while there are a few that are open 24 hours a day.

Taxis: It is fairly normal to fit as many as 8 persons within 4+1 taxis. Unless you’re traveling to the suburbs, rides throughout town should cost roughly $5 for the full cab at night, and $2 or $3 during the day. Before you get in the car, make sure you negotiate the price.

Minibus taxis are readily available and run frequently between the city center and all of the suburbs. Inquire about your destination’s terminal. The fare is usually around $0.50c.

A great sense of pride in the city’s cultural and historical history exists, and many of the older structures have been conserved. Many more may be seen along Robert Mugabe Road between Second Street and Julius Nyerere Way, such as the Mining Pension Fund Building between Central Avenue and Second Street.

Sadza is Zimbabwe’s national dish, a thick white porridge prepared from corn (maize) meal that resembles mashed potatoes. It’s served with vegetables or meat in some manner at every meal.

There are several westernized restaurants in Harare that serve European or American cuisine, however the outside cafés are arguably more exciting:

The number of eateries and coffee shops in Harare has risen dramatically as the economy has become more dollarized. The Zimbabwe Tourism website was also updated lately.

Chibuku, a popular local beer, is a good choice. It comes in enormous 2 litre brown plastic containers known as “scuds.” The beer is lumpy and opaque beige in color, but it’s tasty and affordable.

Shake-shake is a thick and satisfying prepared sorghum beer (made in the traditional African form) that comes in milk cartons.

Castle, Lion, Zambesi, and Bohlingers, all brewed locally, are deserving of your attention.

The official currency, the US dollar, is used to make all purchases at major stores.

Anything created in the area is cheap. Zimbabwe smokes cost $0.50 per pack (as of April 2010). In comparison to South Africa, everything that is imported is quite pricey. Coca-cola cans, for example, are usually $1.

You may wander through the open flea market in Mbare if you want to experience shopping the way it is done in many African nations. Tourists might enjoy a colorful display of baskets, food, clothing, and other products here. The government, on the other hand, destroyed Mbare flea market, as well as every other informal market in the country, in September 2005. Thousands of individuals have been left homeless and without a source of income.

In a country with one of the worst unemployment rates in the world, the government’s attempt to reduce informal commerce was devastating. Markets began to rise again over time.

US dollars are available at ATMs. Most foreign Visa or Master cards are accepted at Ecobank, Stanbic, and Standard Charted ATMs.

Harare boasts a thriving nightlife scene that lasts into the early hours of the morning.

The Sierra Nevada (Spanish for “snowy mountain range”) is a mountain range in Andalucia, Spain, that includes the provinces of Granada, Málaga, and Almeria....
Read more

Leptokarya is a town in the Pieriaregional unit of Central Macedonia, Greece, and the former capital of the East Olymposmunicipality, which is now part...
Read more

Windsor is a mid-sized Canadian city on Ontario’s southwest coast. It is a very multicultural city, with over 20% of its people being born...
Read more

Columbus is the capital and biggest city of Ohio, a state in the United States of America. With a population of 850,106, it is...
Read more
Travel tips