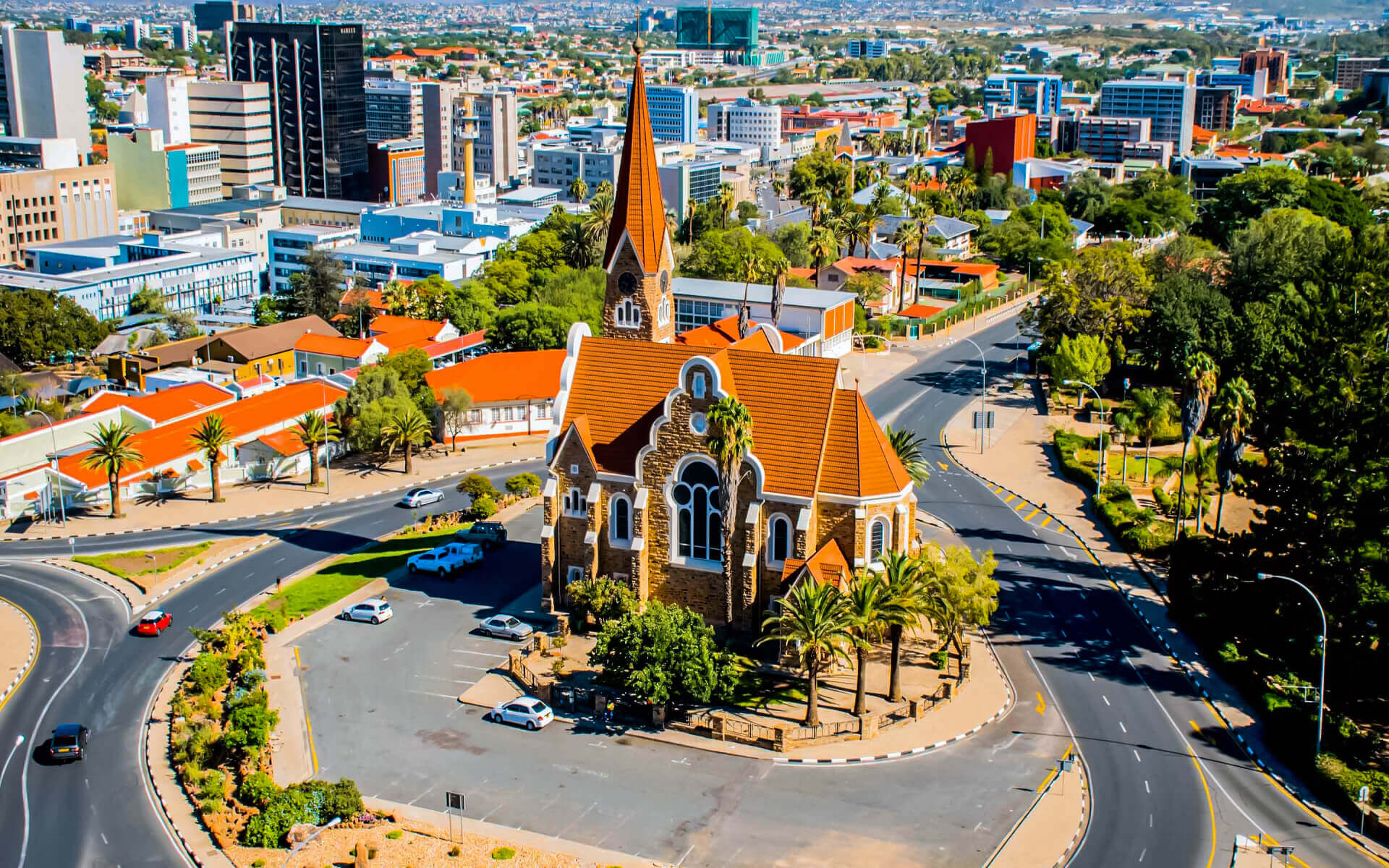 The Republic of Namibia’s capital and biggest city is Windhoek.

It is situated in central Namibia, on the Khomas Highland plateau, at an elevation of roughly 1,700 meters (5,600 feet). Windhoek had a population of 322,500 people in 2012, with an inflow of people from all around Namibia.

Windhoek is the country’s social, economic, political, and cultural hub. There is a headquarters for almost every Namibian national industry, administrative organization, educational, and cultural institution.

This is the starting point for most safaris in Namibia, as well as the initial point of entrance into Namibia if arriving by airline.

Although English is widely spoken across Namibia (it being the country’s official language and the medium of instruction in most schools), Afrikaans (a Dutch-like language) is used as a lingua franca in many urban areas, since Afrikaans is spoken by 50% of the Namibian population. In tourism, German is commonly spoken. Oshiwambo is the mother language of 50 percent of Namibians.

The city of Windhoek is located in a semi-arid climate zone.

During the summer months, the days are mainly hot, with some very hot days, while the evenings are normally chilly.

It is located on a sloping plain on the northern side of the Khomas Hochland (Khomas Highlands) in the Windhoek Basin valley, which stretches for roughly 80 kilometers (50 miles) north-south towards the city of Okahandja. Windhoek is 1,657 meters above sea level (5,436 ft).

Apart from budgetary constraints, expanding the town area has been difficult owing to its geographic position. Windhoek is bordered by rocky, mountainous terrain to the south, east, and west, making land development expensive. Because of the existence of subterranean aquifers, the southern side is not suited for industrial development. As a result, the large Brakwater region north of town is the only viable location for Windhoek’s growth.

Nonetheless, the City Council of Windhoek intends to drastically increase the city’s limits, resulting in a total size of 5,133.4 square kilometers (1,982.0 sq mi). Windhoek will be the world’s third-largest metropolis by size, behind Tianjin and Istanbul, but having a population density of just 63 people per square kilometer.

The city serves as Namibia’s administrative, commercial, and industrial hub. According to a 1992/93 survey, Windhoek employs almost half of Namibia’s non-agricultural workers, with a national share of 96 percent in utilities, 94 percent in transportation and communication, and 82 percent in banking and business services.

Windhoek is the country’s social, economic, and cultural center, much more than many other national capital cities, due to its size. Almost every major national corporation has its headquarters here. The University of Namibia, the country’s lone theatre, all government headquarters, and all major media and financial institutions are also located there.

The city of Windhoek’s governmental budget is approximately equivalent to that of all other Namibian local governments combined. Maerua Mall, Wernhil Park Mall, and The Grove Mall were among the retail malls established in the post-independence period.

Windhoek’s area code is (061). Do not use a ‘0’ between the country code and the area code when dialling Windhoek from outside Namibia.

Buying mobile phone starting packs is less expensive than relying on roaming. They will work in Namibia, with the exception of ‘Switch’ CDMA cards, which will only function in Windhoek.

In Windhoek, there are a lot of well-equipped Internet cafés.