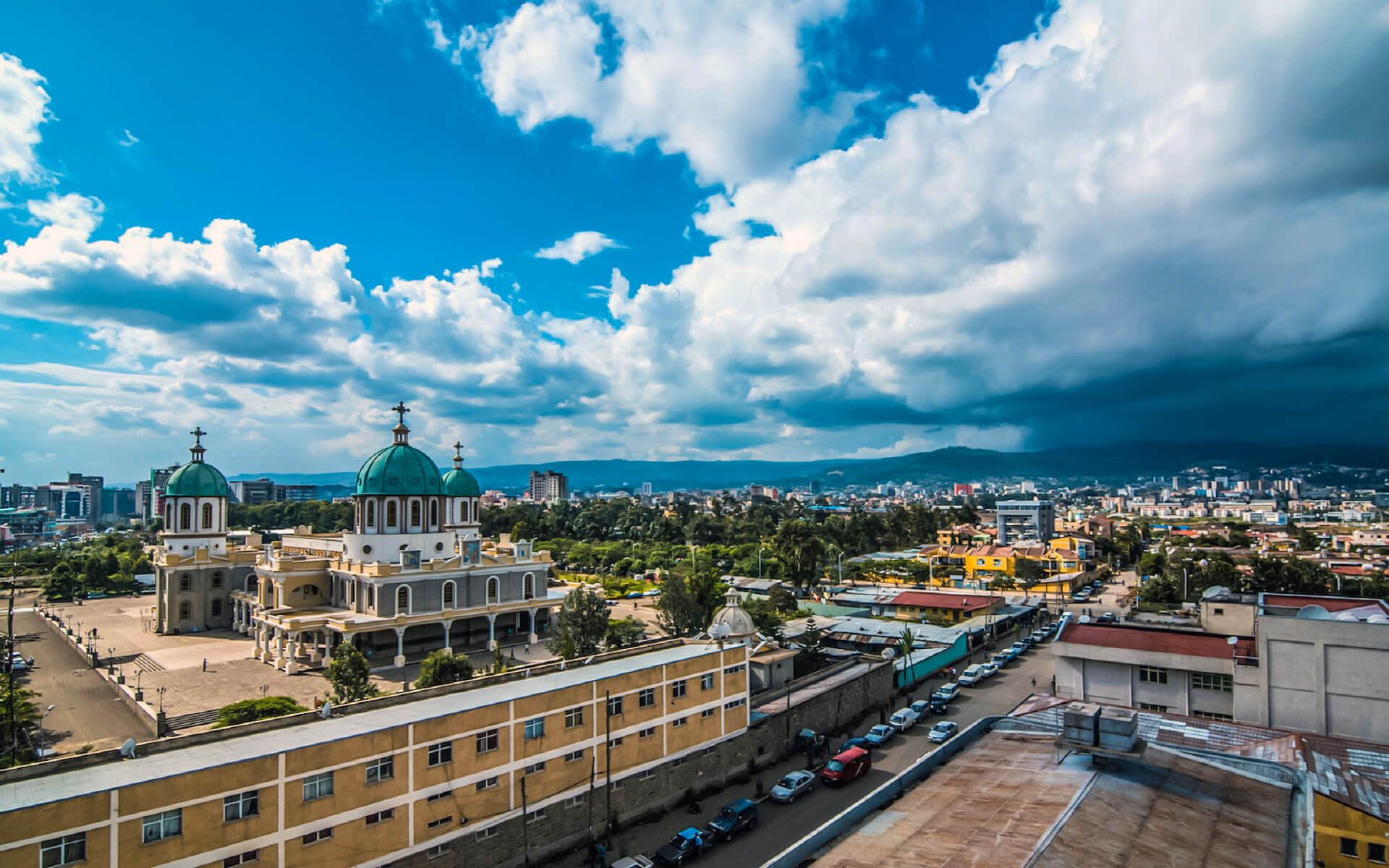 Ethiopia’s capital city is Addis Ababa. It was founded in 1886 and is Ethiopia’s biggest city, with a population of 3,384,569 people according to the 2007 population census and a 3.8 percent annual growth rate.

Addis Ababa is both a city and a state since it is a chartered city (ras gez astedader). It is the headquarters of the African Union, as well as its predecessor, the OAU. It also houses the headquarters of the UN Economic Commission for Africa (ECA) as well as a number of other continental and international institutions. Due to its historical, diplomatic, and political importance for the continent, Addis Ababa is sometimes referred to as “Africa’s political capital.”

The city is inhabited by Ethiopians from various locations, with up to 80 ethnicities speaking 80 languages and adhering to a diverse range of religious groupings.

You’ll probably find the stroll from Meskel Square to Sidest Kilo to be pretty fun and informative. The Africa Hall, the palaces, and the Parliament building, the Hilton Hotel, the magnificent architectural adventure that houses the Ministry of Foreign Affairs, the Sheraton Hotel, the first modern school (built by Emperor Menelik II in the 1880s), the Trinity Orthodox cathedral, the National Museum, and the Addis Ababa University are all worth seeing (which hosts a former palace and museum).

Depending on height and prevailing wind patterns, the city features a complex mix of highland climatic zones, with temperature changes of up to 10 °C (18 °F).

From mid-November through the beginning of January, there is a chance of rain.

Dry winters are characteristic of highland climatic locations, and this is the dry season in Addis Ababa. Daily maximum temperatures are seldom higher than 23 °C (73 °F) throughout this season, while nighttime minimum temperatures might be below freezing.

The lengthy wet season lasts from June to mid-September, and it is the country’s main winter season. Due to the frequent rain and hail, as well as the quantity of cloud cover and fewer hours of sunlight, the temperatures are substantially lower than during other times of the year. The days and nights at this time of year are gloomy, cold, and rainy. The fall season that follows serves as a transition between the rainy and dry seasons.

The city is located at the foot of Mount Entoto and is part of the Awash River’s watershed. The city climbs from its lowest point in the southern perimeter, at Bole International Airport, at 2,326 meters (7,631 feet) above sea level, to almost 3,000 meters (9,800 feet) in the Entoto Mountains to the north.

Addis Ababa’s economic activity are diversified. According to federal government statistics, the city employs 119,197 people in trade and commerce, 113,977 in manufacturing and industry, 80,391 different types of homemakers, 71,186 in civil administration, 50,538 in transportation and communication, 42,514 in education, health and social services, 32,685 in hotel and catering services, and 16,602 in agriculture.

Pickpocketing, frauds, and light burglary are the most typical crimes in this reasonably clean and secure city.

The city has lately seen a development boom, with huge structures sprouting up all over the place. Various high-end services have also become accessible, and shopping mall building has lately surged. Spa specialists in the region have dubbed the place “the spa capital of Africa,” according to Tia Goldenberg of IOL.

Ethiopia’s love of football has brought in a new source of revenue. Arsenal F.C. and the nation’s Dashen Brewery have inked a three-year partnership, with the brewery becoming Arsenal’s beer sponsor in the country beginning in 2015. The English club recognizes their large fan following in the nation and sees the agreement with Dashen as an opportunity to reach out to them and implement some football development initiatives in the country. On September 25, 2015, the agreement was announced.

There are several internet cafés in Addis Ababa, particularly in Bole Subcity. Although some people still use dial-up, broadband is becoming increasingly mainstream. The majority of high-end hotels provide internet connections (ethernet or Wi-Fi) that are quite fast and often complimentary for hotel guests.

The insecure international high-speed connection is a common concern with the Internet in Ethiopia. Even broadband cafés can only provide dial-up speeds if your Internet connection is down. 128Kb is the local definition of high-speed broadband! Another issue is the lack of power, which forces daytime blackouts of whole neighborhoods 1–2 days a week, so it’s a good idea to prepare ahead of time where you’ll get your internet fix.

The cost of roaming is exorbitant. For a brief stay, renting a SIM card with a phone is the best choice for mobile connection. Only a few places rent SIM cards: you may hire a SIM card and phone at the Sheraton Hotel in Addis Ababa, although it’s rather pricey. Renting a SIM card and a phone from a local business is another alternative.