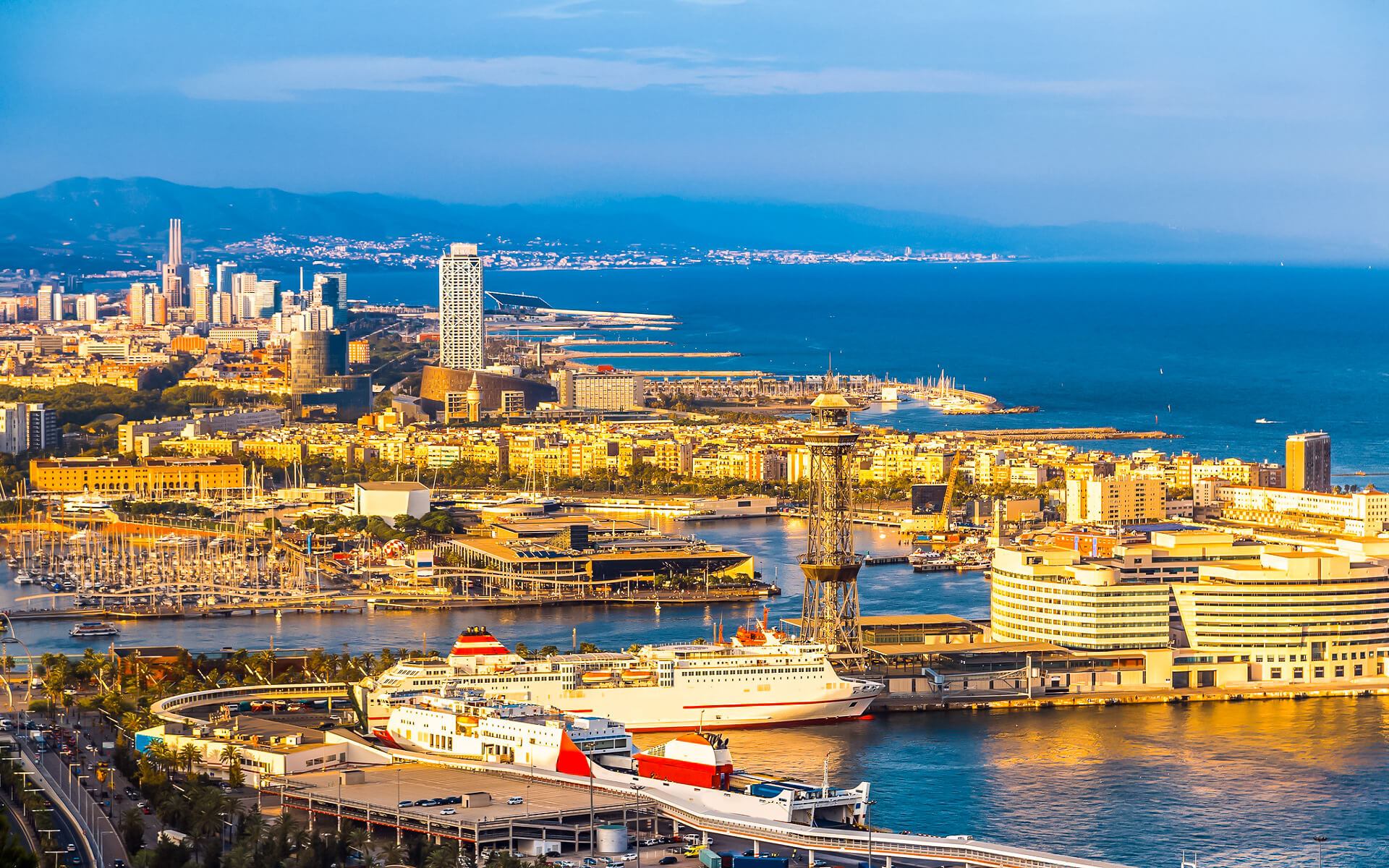 Port of Spain is Trinidad and Tobago’s capital city and the third-largest municipality, behind Chaguanas and San Fernando. The city has a municipal population of 36,963 inhabitants (as of the 2011 census), a metropolitan population of 128,026 inhabitants (1990 unofficial estimate), and a transitory daily population of 250,000 people.

It is situated on Trinidad’s northwest coast, on the Gulf of Paria, and is part of a wider conurbation that stretches from Chaguaramas to Arima.

The city is largely a commercial and administrative hub, having served as the island’s capital since 1757. It is also a significant financial services hub for the Caribbean, housing two of the region’s top banks.

Additionally, the city is home to the island’s main container port and is one of many Caribbean shipping centers, exporting both agricultural and manufactured commodities. Bauxite from Guyana is transshipped via the port of Chaguaramas, located about 8 kilometers (5 miles) west of the city. Pre-lenten Carnival is the city’s primary cultural event and tourist draw each year.

Today, Port of Spain is a major Caribbean city. Trinidad and Tobago held the Fifth Americas Summit in 2009, which was attended by US President Barack Obama and US Secretary of State Hillary Clinton. Additionally, Port of Spain held the 2009 Commonwealth Heads of Government Meeting and the 2011 Commonwealth Business Forum.

Caribbean Airlines, Trinidad and Tobago’s national airline and the Caribbean’s biggest carrier, is based at Nicholas Tower and Piarco International Airport. These structures dominate the city’s magnificent skyline. Port of Spain is home to some of the Caribbean’s largest buildings.

Tourism in Port of Spain

Port of Spain, a vibrant and welcoming city, is an excellent destination to spend a couple of days and serves as the focus for Trinidad’s famed carnival. Since 1757, it has served as the capital and is the primary administrative hub, albeit it is not the biggest town.

Between Frederick Street and Charlotte Street runs the primary retail district, which extends south to Independence Square (Brian Lara Promenade). Along with the brick-and-mortar businesses, the street is lined with vendors offering anything from bananas to CDs.

In the evenings, Independence Square is bustling with residents liming – loitering, talking with friends, and enjoying cuisine from the many kiosks. Taking a stroll around here is an excellent way to get a sense of what Trinidad is all about.

Trinidad Carnival is one of the greatest in the world, and hotels can be certain to fill up and increase their prices throughout its run! It is a combination of parades, music, and calypso contests that takes place in the days before Lent. Participants dress extravagantly and march through the streets, dancing to the beat of a steel band or a soca band. Each year on Carnival Sunday, a tournament is conducted to choose the Carnival King and Queen. Carnival Monday and Ash Tuesday are when the bands fight for the title of “Band of the Year.” Everyone is welcome, from young to elderly, wealthy to impoverished. The Steel Bands practise nightly at their Pan Yards in the weeks before the events. There may be numerous along a particular length of road, such as Western Main, where you may purchase a drink and see the rehearsals.

Wrightson Rd. International Waterfront Centre A large tower construction centered on the Hyatt Regency Trinidad that aims to revitalize the city’s seafront. This is the sole public area of Port of Spain’s waterfront.

National Academy of Performing Arts (on the Savannah’s city side. It’s impossible to miss.). This skyscraper, which opened at the end of 2009, has been the subject of multiple corruption charges. The design is intended to symbolize Trinidad’s national flower, but has received much criticism for being out of step with the surrounding surroundings. “Coaling slugs” was perhaps one of the more palatable descriptions.

Cotton Hill Royal Botanic Gardens These gardens, established in 1818, are one of the Caribbean’s oldest. 700 trees, 13% of which are native to Trinidad and Tobago.

Port of Spain is home to a variety of nightclubs and entertainment complexes; among the greatest and most costly are undoubtedly Zen, 51 degrees, Coco Lounge, El Morocco, and Shakers; however, the list is always changing as partygoers’ preferences evolve. International and regional artists like Beyoncé, Chris Brown, Sean Paul, Rihanna, Cascada, Akon, Usher, Maroon 5, Kumar Sanu, and Trinidadian-born International Super Star Nicki Minaj have all paid visits to Port of Spain.

Port of Spain is home to a diverse range of restaurants, including Italian, Mexican, Lebanese, Thai, Venezuelan-Panyol, French, Japanese, Chinese, Creole, American, and Indian, with the majority concentrated on Ariapita Avenue, a popular entertainment strip that also features a Jazz Lounge and a Wine Tasting restaurant. On the city’s waterfront, MovieTowne’s Fiesta Plaza, a homage to Bourbon Street New Orleans, has several new restaurants, open-air eating, and a bandstand with live entertainment. Port of Spain’s award-winning restaurants provide a diverse selection of local and foreign cuisines, as well as fast food businesses. Numerous eateries in the city may be experienced during the Taste T&T Food Festival, which takes place annually in May at the Jean Pierre Sports Complex.

Climate of Port of Spain

Due to the city’s closeness to the equator, it has a tropical wet and dry climate with warm to hot temperatures year-round and minimal seasonal change, but nighttime temperatures do drop somewhat during the winter months of January to March.

Temperatures are generally between 19 and 34 degrees Celsius, seldom exceeding 35 or falling below 17.

June to November is the rainy season, whereas December to May is the dry season.

December–February, while being in the dry season, may be rather chilly at night.

Geography of Port of Spain

Port of Spain has an area of around 10.4 kilometers square (almost 4 square miles) and is situated in the northwest region of Trinidad, between the Gulf of Paria, the Northern Range, and the Caroni Swamp.

The Northern Range is a chain of towering, biodiverse hills that spans the northern section of Trinidad and is sometimes mistaken for an extension of South America’s Andes mountains, despite the fact that this is not the case geologically. The Northern Range, which stretches from the Chaguaramas Peninsula in the west to Toco in the east, is mostly composed of steeply descending metasedimentary rocks and lush rainforest teeming with a diverse range of plant and animal species. Port of Spain is located on the western edge, and the city rises into the inhabited and mainly deforested hills and valleys. El Cerro del Aripo and El Tucuche are the two highest summits at 900 m.

A portion of the city is built on ground reclaimed from the Gulf of Paria, the tranquil protected bay that separates Trinidad and Venezuela, while other sections are built into the hills above the city. Geographically, the Port of Port of Spain is suitable for marine commerce since it is a natural harbor on Trinidad’s northwestern shores, where unfavorable weather conditions are exceedingly infrequent.

In contrast to Chaguanas and San Fernando, Port of Spain enjoys a temperate climate, owing to its height and proximity to the Northern Range mountains. Temperature inversions are extremely common in the high, foggy valleys and mountains that surround the city’s northern borders, and the mountains give a welcome respite from the searing heat below. Blue Basin waterfall, a prominent site in Diego Martin, is situated north. This waterfall is the nearest and is energizing and refreshing.

Economy of Port of Spain

Port of Spain serves as a retail and economic hub for a large portion of the nation. The majority of government offices are likewise situated in the city, and many vital government services are only available in downtown Ministry offices. Local banks established here have aided in the city’s transformation into a financial hub for the Caribbean and Central America area in recent years. Two of the Caribbean’s major banks, Republic Bank of Trinidad and Tobago Limited and Royal Bank of Trinidad and Tobago (RBTT, which was reacquired by the Royal Bank in 2008), have their headquarters or Caribbean operations in the city.

The economy of Trinidad and Tobago is dependent on natural gas and oil. Although there are no significant industrial sites in Port of Spain, a major oil refinery and many petrochemical and iron and steel industries exist or are planned south of the city, closer to Trinidad’s second city of San Fernando. However, the oil and gas giants, as well as a few service businesses, have established headquarters in the city to be near to government services, infrastructure, and the high standard of living enjoyed by many Port of Spain residents. BPTT, BGTT (British Gas), BHP Billiton, EOG Resources, Fluor, Repsol YPF, Atlantic LNG, and Baker Hughes are just a few of the oil and gas companies with headquarters in Port of Spain (many more are at San Fernando & Point Lisas).

Trinidad and Tobago is regarded as one of the Caribbean’s richest countries, and a portion of this wealth is on show at Port of Spain. Profits from the worldwide export of natural gas have supported the government in the construction of the Port of Spain International Waterfront on former Port Authority land. The Port of Port of Spain is the primary containerized shipping port in the nation, followed by the Port of Point Lisas. Additionally, cruise ships land at the port, which features the following: International public cargo terminals for containerized, break-bulk, roll-on/roll-off, and dry/liquid bulk cargo Additionally, the Port handles the ferry service between Trinidad and Tobago on behalf of the Republic of Trinidad and Tobago. While tourism is being expanded and is a rising aspect of the city’s economy, it is not as significant as it is in other Caribbean towns. Port of Spain is home to a large agricultural market, dubbed the “central market,” which facilitates the trading of food produced in the neighboring countryside.