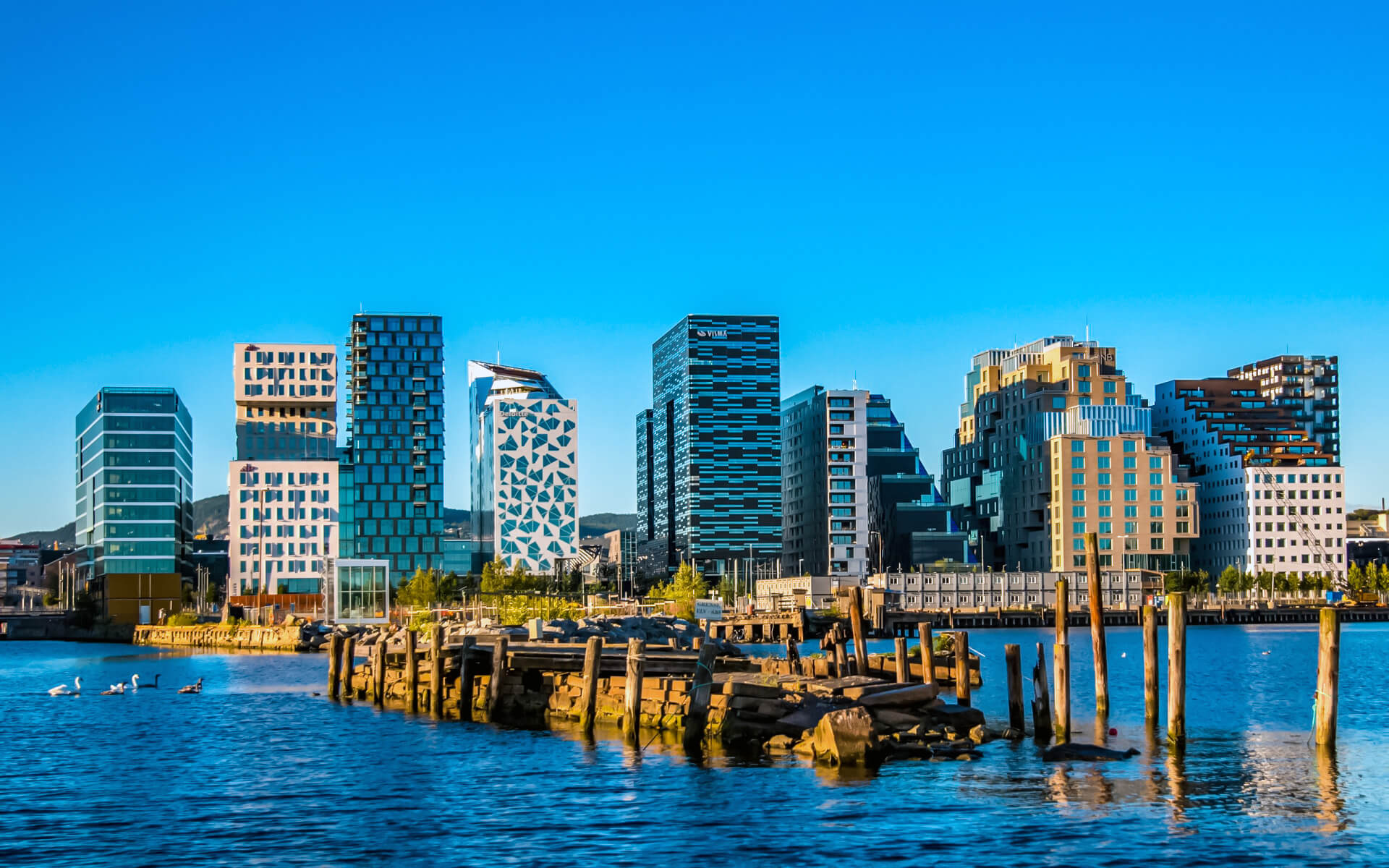 Oslo is the capital and biggest city of Norway, as well as the third largest city in Scandinavia. It is located in the country’s east in a fjord that extends across an entrance of the Skaggerak strait and is surrounded by verdant hills and mountains, as well as 40 islands and 343 lakes.

Because Oslo is one of the world’s northernmost capitals, it only receives 6 hours of sunshine each day in the winter. In the height of summer, the number of daylight hours reaches 18, resulting in a climate that is notably different across seasons, with chilly but reasonably dry winters.

Oslo, a very tiny city packed onto a narrow strip of land along the coast, prides itself on being one of the world’s most sustainable cities. While it has a number of ancient monuments, Oslo is arguably best known for its contemporary architecture, particularly the spectacular and ambitious projects that were started around the turn of the century.

The marine industry, high-tech, and renewable energy industries drive the Oslo economy. The Swiss financial management firm UBS AG named Oslo as the world’s most expensive city to live in in 2010.

Oslo is Norway’s demographic, economic, and political hub. Oslo, Norway’s capital, is home to a number of national institutions. The city boasts a decent number of cultural institutions as well as a good selection of restaurants, some of which are world class but most of which are not, as well as a good selection of nightlife in general. While it is a costly city for tourists from other countries, many of the greatest things are free, particularly Oslo’s closeness to natural environment and range of outdoor activities.

Oslo boasts a diverse range of cultural attractions, including multiple buildings featuring artwork by Edvard Munch and other foreign painters, as well as several Norwegian artists. Several world-renowned authors have either lived or been born in Oslo.

Oslo is home to a number of prominent museums and galleries. The Munch Museum houses The Scream and other paintings by Edvard Munch, who bequeathed his entire body of work to the city following his death. There are 50 museums spread around the city.

Oslo has a plethora of events, such as the Oslo Jazz Festival, a six-day jazz festival that has been held annually in August for the last 25 years. yafestivalen, or simply “ya,” is Oslo’s largest rock festival. It attracts around 60,000 people to Oslo’s Medieval Park east and lasts four days.

The city has about 20 theatres, including the Norwegian Theatre and the National Theatre, both of which are situated on Karl Johan Street.

Due to the city’s northern latitude, daylight hours vary dramatically, ranging from more than 18 hours in summer, when it never becomes fully dark at night, to roughly 6 hours in midwinter.

Oslo experiences warm summers, with two out of every three days in July having high temperatures over 20 °C and one out of every four days having a maximum temperature above 25 °C.

Oslo, with an area of around 453 square kilometers, is one of the world’s biggest capitals. Granted, the majority of this is woodland, giving Oslo a city in intimate touch with its surroundings. The Oslo fjord flows north from the Skagerrak sea. Oslo boasts an outstanding archipelago of islands, which becomes the city’s favorite playground in the summer.

Oslo is built in the shape of an amphitheatre, with the city center at the bottom along the Oslo fjord and residential neighborhoods reaching upwards in all directions. The woodland section of Marka (Nordmarka, Stmarka, Lillomarka) stretches behind the residential districts, with vegetation and wildlife that is fairly unusual for a city of this size. Moose are plentiful (and readily seen in the winter), and the whole city is part of Norway’s wolf reserve (even if they rarely come here).

The city center is confined to the east by Oslo Central Station (Oslo S), to the west by the Royal Palace (Slottet), and to the south by the beachfront (from Akershus fortification to Aker brygge). It’s rather small and walking. The primary artery of downtown Oslo is Karl Johans gate, a primarily pedestrian main roadway linking Oslo S and the Palace. However, some of the areas around the center have intriguing sights and entertainment offers, so you should take use of the city’s extensive public transportation system to explore them.

Oslo’s economy is diverse and powerful, and it was placed first among European big cities in economic potential in the fDi Magazine study European Cities of the Future.

Oslo is an important center of nautical expertise in Europe, with roughly 1980 enterprises and 8,500 marine personnel. Some of the world’s major shipping businesses, shipbrokers, and insurance brokers are among them.

The city’s port is the country’s main general cargo port and its primary passenger gateway. Every year, over 6,000 ships dock at the Port of Oslo, carrying a total of 6 million tonnes of cargo and over 5 million people.

Oslo is one of the world’s most costly cities.

The majority of internet cafés are in the eastern portion of town, called Grnland. Look for little establishments that sell phone cards and offer internet access. WLANs are simple to discover if you have your own laptop. They may be found in cafés, hotels, restaurants, and even parks. There are various open wifi connections on the top level cafés at Oslo Sentralstation and Grnland metro station.