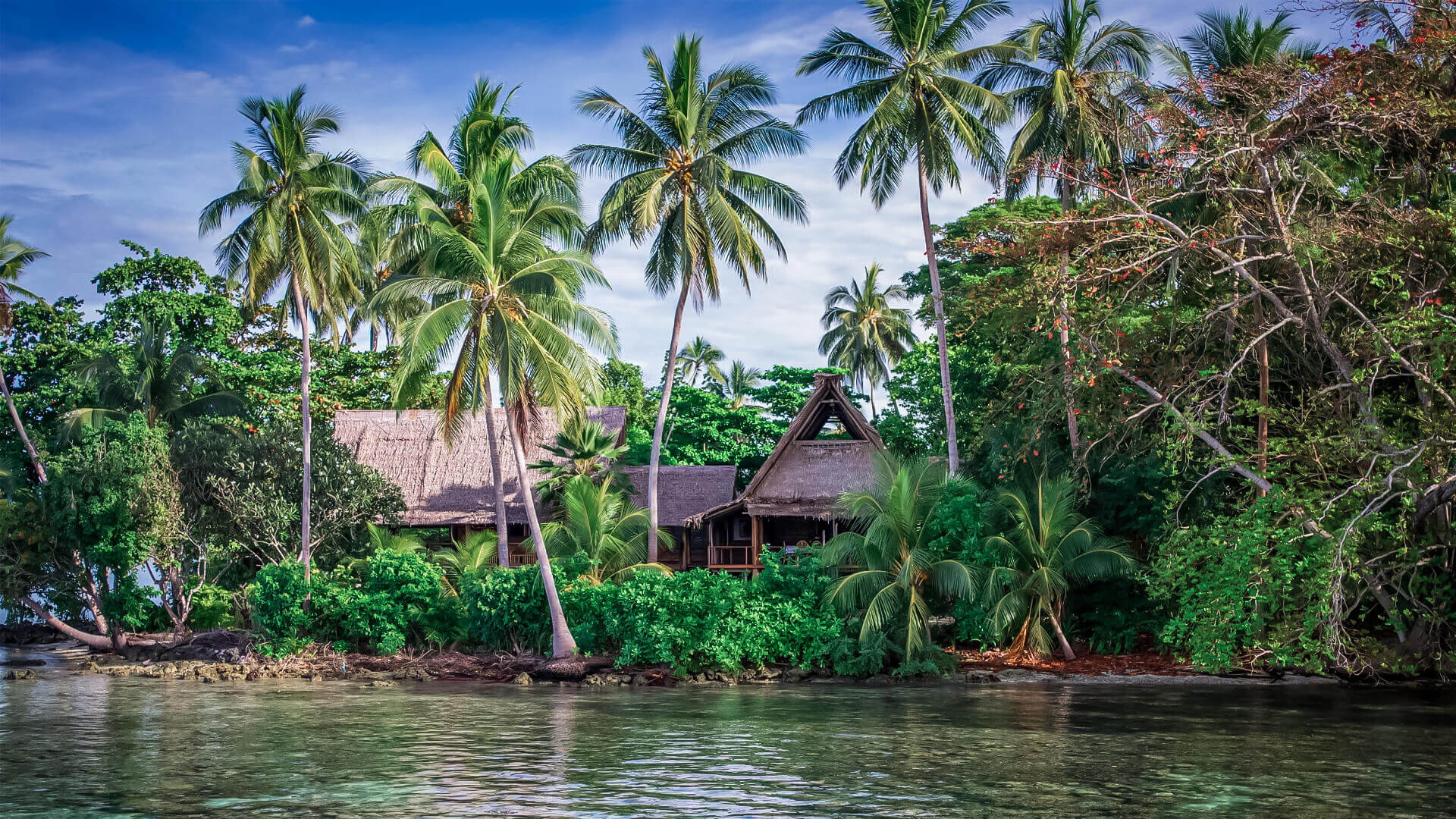 The Solomon Islands is a sovereign nation in Oceania that consists of six main islands and over 900 smaller islands. It is located to the east of Papua New Guinea and to the northwest of Vanuatu and has a land area of 28,400 square kilometers (11,000 sq mi). Honiara, the country’s capital, is situated on the island of Guadalcanal. The nation derives its name from the Solomon Islands archipelago, which comprises the North Solomon Islands (part of Papua New Guinea) but excludes outlying islands such as Rennell and Bellona, as well as the Santa Cruz Islands.

For thousands of years, people have lived on the islands. The first European to see them was the Spanish sailor lvaro de Mendaa in 1568, who named them Islas Salomón. When Captain Gibson R.N. of HMS Curacoa proclaimed the southern Solomon Islands a British protectorate in June 1893, Britain established its area of interest in the Solomon Islands archipelago. The Solomon Islands campaign (1942–1945) witnessed intense combat between the United States and the Empire of Japan, including the Battle of Guadalcanal.

In 1975, the then-British foreign territory’s official name was changed from “the British Solomon Islands Protectorate” to “Solomon Islands.” Self-government was established in 1976, followed by independence two years later. Today, the Solomon Islands is a constitutional monarchy, with the Queen of the Solomon Islands, presently Queen Elizabeth II, serving as its head of state. The current Prime Minister is Manasseh Sogavare.

The Solomon Islands is a large island country with a distance of approximately 1,500 kilometers between the westernmost and easternmost islands (930 mi). The Santa Cruz Islands (of which Tikopia is a part) are located north of Vanuatu and are particularly remote, being more than 200 kilometers (120 miles) from the other islands. Bougainville is physically part of the Solomon Islands, although it is a Papua New Guinea independent territory.

The Solomon Islands archipelago is divided into two terrestrial ecoregions. The Solomon Islands rain forests ecoregion encompasses the majority of the islands. Forestry operations have put a significant strain on these woods. Together with the adjacent archipelago of Vanuatu, the Santa Cruz Islands are part of the Vanuatu rain forests ecoregion. More than 230 orchid and other tropical flower types adorn the landscape. There are many active and dormant volcanoes on the islands, with Tinakula and Kavachi being the most active. Mount Makarakomburu, at 2,447 meters, is the highest peak. The area is dotted with many low-lying coral atolls.

The ocean-equatorial climate of the islands is very humid all year, with a mean temperature of 27 °C (80 °F) and minimal temperature or weather extremes. The colder months are June through August. Though seasons are not discernible, the northwesterly winds that blow from November to April bring more frequent rainfall and the occurrence of squalls or cyclones. The yearly rainfall is about 3050 mm (120 in).

The majority of Solomon Islanders are Melanesian in ethnicity (94.5 percent ). Polynesian (3%) and Micronesian (1.2%) are the two other major groups. There are a few thousand Chinese people.

Islam, the Baha’i Faith, Jehovah’s Witnesses, and The Church of Jesus Christ of Latter-day Saints are among those who remain (LDS Church). According to the most current estimates, there are about 350 Muslims in the Solomon Islands, including members of the Ahmadiyya Muslim Community.

The Solomon Islands, with a per-capita GDP of $600, is classified as a developing country, and more than 75 percent of its labor force is involved in subsistence and fishing. The vast majority of manufactured items and petroleum products must be imported. Wood was the Solomon Islands’ primary export commodity until 1998, when global prices for tropical timber plummeted precipitously, and in recent years, Solomon Islands forests have been severely overexploited.

Copra and palm oil are two more major cash crops and exports. On Guadalcanal, gold mining started in 1998 at Gold Ridge. Exploration for minerals in other regions continues. Following the ethnic unrest in June 2000, shipments of palm oil and gold stopped, while wood exports decreased. Undeveloped mineral resources such as lead, zinc, nickel, and gold abound on the islands.

The Solomon Islands’ fisheries also provide opportunities for export and local economic growth. As a consequence of the ethnic conflicts, a Japanese joint venture, Solomon Taiyo Ltd., which ran the country’s sole fish cannery, shuttered in mid-2000. Despite the fact that the facility has reopened under local control, tuna exports have yet to begin. Negotiations are now ongoing to revive the Gold Ridge mine and the large oil-palm plantation.

Tourism, especially scuba diving, is a significant service sector in the Solomon Islands. Tourism development is hindered by a lack of infrastructure and transportation constraints.

By 2002, the Solomon Islands government was bankrupt. The government has restructured its budget after the RAMSI intervention in 2003. It has consolidated and renegotiated its internal debt and is now attempting to renegotiate its international debts with the help of Australia. Australia, New Zealand, the European Union, Japan, and the Republic of China are the primary assistance contributors.

Notably, Solomon Islands courts re-approved the profiteering export of live dolphins, most recently to Dubai, United Arab Emirates. The government first prohibited this practice in 2004, after worldwide outrage over a transport of 28 live dolphins to Mexico. The decision drew condemnation from Australia and New Zealand, as well as many environmental organizations.

By planeHenderson International Airport is located 7 miles east of Honiara, the capital. Most days, scheduled flights leave from Brisbane, Australia. Flights are also available between Vanuatu, Fiji, and New Guinea.By seaHoniara is sometimes visited by cruise ships.It is also feasible to go by boat from southern Bougainville in...

Auki FerryThis service operates most days from Honiara Wharf to Auki on the island of Malaita, which is located across the Slot from Honiara. In 2012, the one-way ticket was S$300 and the return fare was S$580. The ferry passes through the Florida Islands channel, which is worth viewing,...

Everyone must have a passport, an onward ticket, and enough money to cover their stay in the Solomon Islands.Citizens of the following countries may get visitor visas on arrival:American Samoa, Andorra, Anguilla, Antigua and Barbuda, Argentina, Aruba, Australia, Austria, Bahamas, Barbados, Belize, Bonaire, Brazil, British Virgin Islands, Brunei, Canada,...

Islands in Solomon IslandsChoiseulthe northernmost region, which comprises the Treasury Islands, Shortland Islands, and Choiseul itselfFlorida and Russell IslandsGuadalcanal (Honiara)the main island, which contains the capital city and the primary airportNew Georgia IslandsNew Georgia, as well as a slew of small islands and atollsMalaitaRennell and BellonaMakiraPreviously, this island was known...

In Honiara, ATMs are accessible. Some hotels and resorts accept Australian currency.The majority of the population relies on agriculture, fishing, and forestry for a portion of their income. The vast majority of manufactured items and petroleum products must be imported. Undeveloped mineral resources such as lead, zinc, nickel, and...

In the Solomon Islands' traditional culture, age-old traditions are passed down from generation to generation, supposedly by the ancestor spirits themselves, to create the cultural values of the Solomon Islands.MediaDue to linguistic difficulties, illiteracy, and the difficulty of getting television signals in certain areas of the nation, radio is...

Melanesian people are said to have inhabited the Solomon Islands for thousands of years. It is thought that Papuan-speaking immigrants first arrived about 30,000 BC. Around 4,000 BC, Austronesian speakers came, introducing cultural features such as the outrigger canoe. The Lapita people, progenitors of the Polynesians, came from the...

Stay Safe in Solomon IslandsThe Solomon Islands are situated in the Pacific "Rim of Fire" and are prone to earthquakes, some of which are very big! An 8.1 magnitude earthquake near Ghizo Island (in the New Georgia Islands) in 2007 caused a tsunami up to 12 meters high, killing...