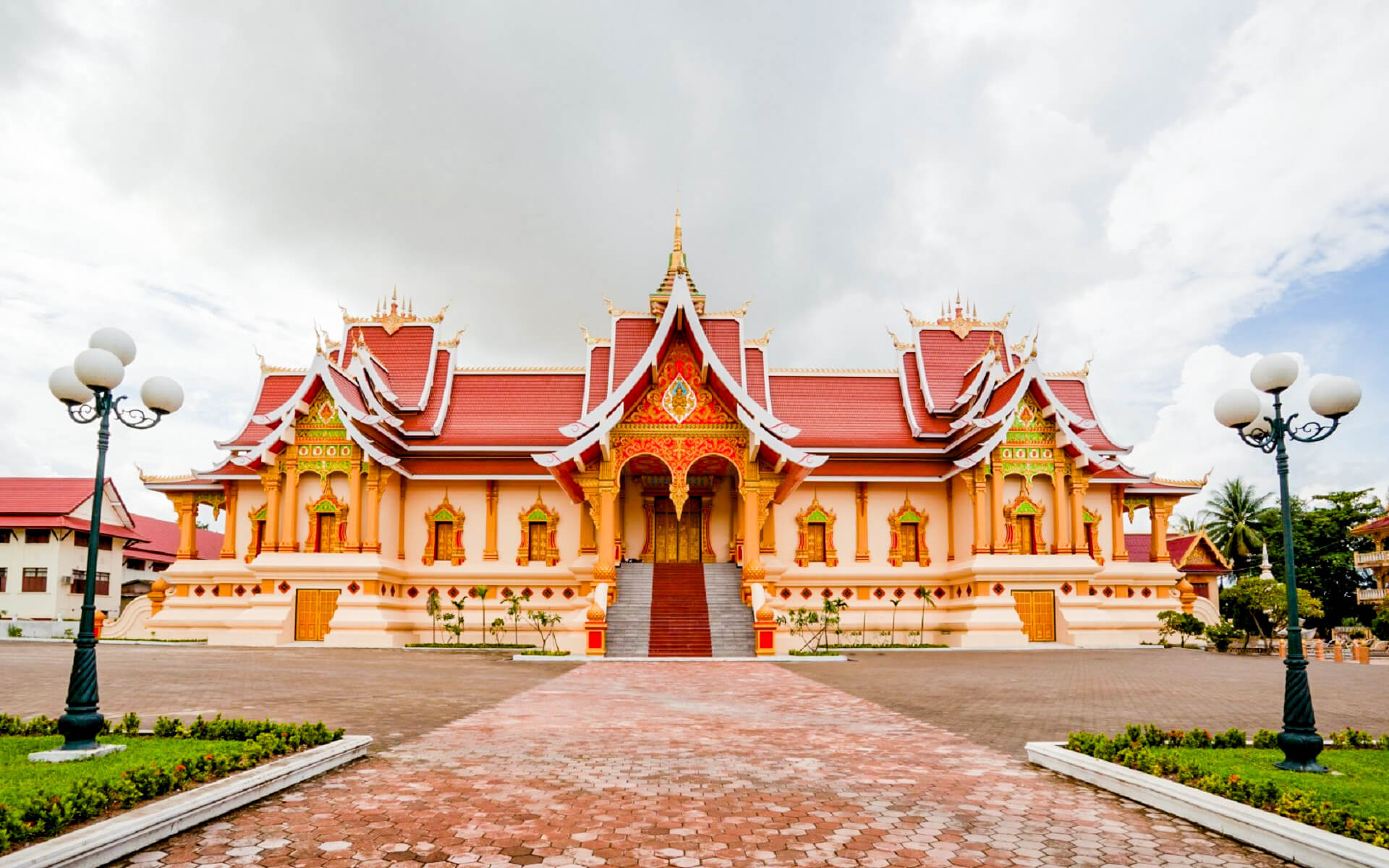 Vientiane is the capital and biggest city of Laos, located on the banks of the Mekong River near the Thai border.

Fears of a Burmese invasion led to the establishment of Vientiane as the capital in 1563.

Vientiane was the administrative capital under French control and, as a result of recent economic progress, is now Laos’ economic center.

In contrast to the busy, bustling capitals of other Southeast Asian nations, Vientiane’s peaceful ambiance makes it seem like a tiny village. After you’ve completed the temple circuit, the finest thing to do here has always been to go down to the riverfront, relax with a nice Beerlao, the Lao national beer, and watch the sun set over the Mekong.

Of course, the thriving tourist business is slowly but steadily introducing the excesses of Thailand and China to this relatively tranquil city. Vientiane, like every other Southeast Asian capital/major city, is witnessing a construction boom. Even its Presidential Palace is getting a big facelift, with the addition of a new conference center.

Despite its small size, the capital sees a significant stream of visitors. The city has various temples and Buddhist monuments, including Pha That Luang, a Buddhist stupa that is one of Laos’ most renowned. It is the most significant national cultural landmark and a popular destination for international visitors. King Setthathirath erected the original in 1566, and it was repaired in 1953. The golden stupa is 45 meters tall and is said to house a relic of the Lord Buddha.

Wat Si Muang is another well-known tourist attraction. The temple was erected over the remnants of a Khmer Hindu shrine, which can be seen beyond the ordination hall. It was constructed in 1563 and is said to be guarded by the soul of a local girl named “Si.” According to legend, Nang Si, who was pregnant at the time, jumped to her death as a sacrifice just as the pillar was being dropped into the pit. A statue of King Sisavang Vong stands in front of the temple.

Patuxai, a memorial monument that started building in 1957 and was finished in 1968, is undoubtedly the city’s most iconic feature.

While the architecture was influenced by the Arc de Triomphe in Paris, the design integrates traditional Lao elements such as “Kinnari,” a mythological bird lady. Visitors who are up for a challenge may climb to the top of the monument, which offers a panoramic view of the city.

Luang Pu Bunleua Sulilat established Buddha Park in 1958, and it has a collection of Buddhist and Hindu statues distributed amid gardens and trees. The park was established on the banks of the Mekong River, some 28 kilometers south of Vientiane.

Vientiane has a tropical wet and dry climate with a distinct monsoon and dry season.

The dry season in Vientiane lasts from November to March.

The monsoon season begins in April and lasts for around seven months in Vientiane.

Vientiane is hot and humid all year, while temperatures in the city are somewhat milder during the dry season than during the rainy season.

Internet cafés are common in Vientiane, especially around Samsenthai Rd and the east end of Setthathirat Rd. The standard fee is 100 kip per minute, which is often paid in 10-minute intervals. The hourly rate is between 5,000 and 6,000 kip. Many hotels, restaurants, cafés, and pubs have free wifi, however it is sometimes sluggish.

SIM cards for Laos networks, such as Unitel, may be purchased at the airport, along with credit and data packages if needed. Thai SIM cards will operate here if you are close to and have a clear view of Thailand on the opposite side of the Mekong.

Las Vegas, formally the City of Las Vegas but often referred to as just Vegas, is a city in the United States. It is...
Read more

Matanzas is the capital of Cuba’s Matanzas province. It is situated on the northern coast of the island of Cuba, on the Bay of...
Read more

Leeds is a city in the English county of West Yorkshire. Leeds may be traced back to the 5th century in Yorkshire’s West Riding,...
Read more

Negril is a popular tourist resort in Western Jamaica, particularly for its white sand beaches. Negril is renowned for its seven miles of beautiful, white...
Read more

Buenos Aires is Argentina’s capital and biggest city, as well as the country’s second-largest metropolitan region. It is situated on the southeastern coast of the...
Read more
Unusual places