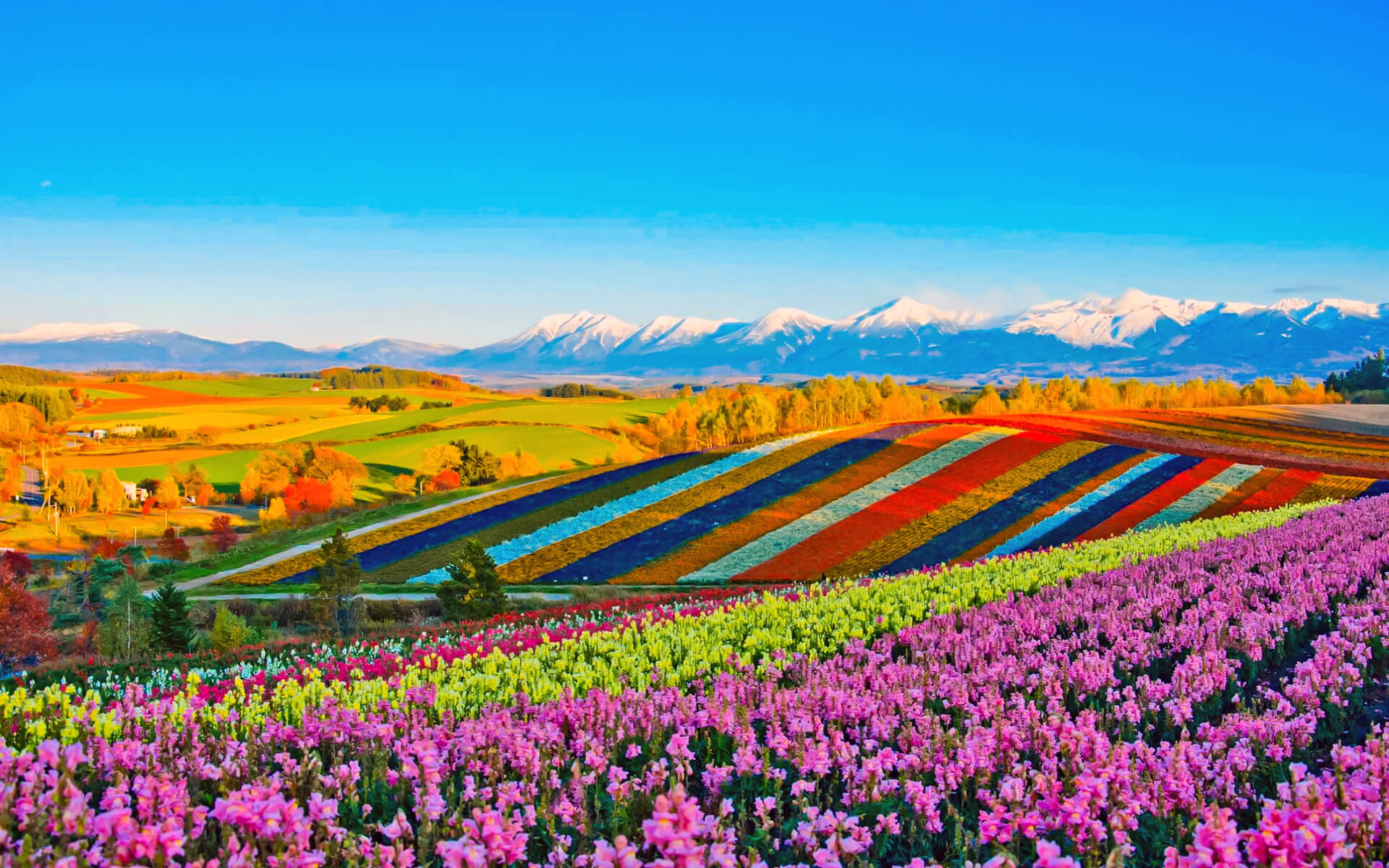 Furano Ski Resort, commonly known as Furano Ski Area, is a resort owned and run by Prince Hotels in Furano, Hokkaido, Japan. The resort became notable for its long-standing affiliation with the FIS Alpine Ski World Cup, making it one of the major ski regions in Hokkaido. In recent years, it has hosted the Snowboarding World Cup in mid-February. A panoramic view of the Furano Valley and the Tokachi Peak Mountain Range may be had from the top of the hills.

Because of its central position, Furano is known as Heso no Machi (the Belly Button Town). Furano’s inland position (nearly 100 km — approximately as far inland as Japan goes) and high elevation result in a continental climate, which is why the ski slope and wine industries are so successful. Because there is such a wide temperature range, even in the summer, a light jacket is advisable. Summer noon temperatures may surpass 30 degrees Celsius, while midwinter temperatures may fall below -30. Furano receives a lot of snow in the winter.

The city has a population of around 26,000 people, including the incorporated settlements on the periphery. The major municipal area is believed to have a population of about 16,000 people. Outside of the big hotel and tourist districts, don’t expect to see many English speakers.

Of recent seasons, there has been a significant surge in international skiers and snowboarders, mainly from Australia. Furano seems to be on track to replicate Niseko’s skiing success.

Meanwhile, the Furano Basin has grown in popularity for its summer lavender fields, which attract people from Taiwan and China, as well as from all around Japan.

Furano ski vacations take you to one of the greatest snow stashes in the world. Because it is located in the heart of Hokkaido, the enormous quantities of snowfall are drier than at Niseko or Rusutsu, and powder skiing is nearly assured.

Furano’s facilities and services are adequately developed, yet unlike several Japanese ski resorts, Furano does not seem too “resortified.” Furano, a neighboring village, is quite genuine, and both the town and the resort give ample creature amenities, including the capacity to cater to English-speaking tourists, without sacrificing the spirit of Japan.

The Furano Ski Area is divided into two zones: the Kitanomine zone (mid-December to late March) and the Furano zone (late March to mid-December) (Late Nov – Early May). Both regions provide a range of housing choices, and Furano, which is just a 3 minute shuttle ride from the Kitanomine zone and a 6 minute shuttle ride from the Furano zone, has a large selection of restaurants and bars as well as all the amenities you would expect to find in a town. Both of these zones are accessible with a single pass and are served by 11 lifts. Furano features a variety of terrain for all levels of skiers and snowboarders, as well as a vertical drop of over 950 meters, making it one of Hokkaido’s steepest mountains.

Furano is truly a world-class resort, bordered by Hokkaido’s stunning Daisetsu-zan National Park, and it is a testament to the mountain and the quality of the snow that it has hosted the FIS Downhill World Cup 10 times and regularly hosts National and International ski and snowboard events, including the 2005/2006 Snowboard World Cup. Because of the excellent weather and exciting mountain, many of Japan’s best skiers base themselves here.

Furano Japan is a substantial ski resort by Japanese standards (but it’s not gigantic! ), with 9 lifts and 24 courses (ie designated lines) and 974 metres of vertical, putting the resort on the world cup ski racing map.

Furano is well-known for its numerous long groomed courses for beginners to expert riders, and whether you want to cruise or speed down lines at Mach 2 until your eyes water, Furano skiing is for you. And since the majority of the Furano lifts are quick, your legs will need to be in top shape to endure the day!

Furano also features natural on-piste lines with pitches of up to 34 degrees. The major draw for advanced and expert skiers is the excellent off-piste terrain and amazing side-country (easily accessible backcountry) for those with avalanche gear and knowledge.

Furano used to have a reputation for prohibiting off-piste and tree skiing, as well as a history of enforcing it aggressively. Thankfully, this is no longer the case, and off-piste skiing is now allowed in most areas of Furano, so you no longer need to blend in.

The mountain’s base areas on both sides feature large, mellow courses served by a detachable quad and 2-person lifts. There is also a beginner’s section at the top of the ropeway (cable car) so that novice skiers and snowboarders are not restricted to the base regions. Because 40% of the mountain is designated novice, some of the routes are skiable for individuals who want to challenge themselves. Furano has two ski schools, one in each of the zones of Furano and Kitanomine. English teachers will be available, and they will all be qualified.

There is a great variety of terrain for skilled skiers and boarders that will severely test your abilities. Twenty percent of the mountain is classified as advanced, and there are several steep and deep routes to enjoy. Even better, if you’re a powder junkie, there’s nothing like waking up after one of the numerous massive dumps and leisurely going to the gondola for first lifts, knowing that just a handful of hard-core locals will be waiting to charge down the hill.

Furano’s courses are ideal for intermediate skiers and boarders since they are long, broad, and rapid. With 40% of the mountain graded intermediate, you’ll never run out of runs that challenge and thrill you. There are many routes to travel down the hill, ranging from simple cruising groomers to 4.8km lengthy, roller-filled courses all the way to the bottom. If you’re looking for a challenge, Furano also features a downhill track where the World Cup has been hosted on a regular basis. Alternatively, just have fun and relax with family and friends while enjoying the mountain together.

Night skiing is a great way to spend an evening on both slopes, which are open until 8 p.m. Enjoy the beautiful vistas of the region come to life at night while drifting along the well-lit groomers. Ski close to the door of several establishments on both sides. You may ski to the entrance of the Ice Dome and pubs on the Kitanomine pension side of the slope and get a drink or a hot baked potato without even removing your bindings. With so many restaurants, pubs, activities, and events to choose from, you won’t be bored after you’ve put your skis away for the evening.

While Furano gets around 9m of some of the lightest and driest snow on the planet, it is also blessed with an incredible number of blue sky days, more than nearly any other ski region in Hokkaido. With a snow base that typically exceeds 3.3m each year, it’s almost remarkable that so many mornings can produce excellent skiing and boarding conditions on a regular basis. Wake up to new snow and a blue sky, and you’ll be out of bed and on the first lifts every morning.

Furano’s temperatures are somewhat cooler than those of other of the coast’s ski destinations, but this is why we routinely receive such great snow. The snow that falls is superb, and even if two or three days do not produce any white gold, the snow remains fluffy and pleasant to ski and board on.

Furano Dining is wonderful, exciting, and reasonable, with a range of Japanese and Western-style restaurants and cafés in both the ski resort and Furano’s main municipality.

There are a few bars inside some of the hotels and pensions, and Furano town is just minutes away, where you can discover some unique bars, entertaining Japanese izakayas (pubs), karaoke rooms…

During the ski season, there are a variety of restaurants and cafeterias operating on the mountain. There are great restaurants at the foot of both the Kitanomine Gondola and the Furano Ropeway (cable car) where you can enjoy a broad range of tasty, substantial, and healthful meals. In the Furano Zone, at the top of the ropeway, there is also a little European-style café restaurant with a fireplace to relax by. If you seek for it, there are options for all diets and preferences, and everything is fairly priced. Food, beverages, and beers are also available from vending machines located throughout the hill at various locations. All beverages are also quite affordable. The Snow Dome Festival location is located at the Kitanomine gondola’s base. This is a nice place to dine after skiing, have a soothing drink, hot wine, beer, or hot chocolate, and relax in a little rural festival setting.

Furano’s lodgings are largely western-style hotels and pensions. Furano is unusual for a Japanese ski resort in that it also offers a limited number of self-contained accommodations such as flats and homes. Furano lodging is less costly than Niseko hotel, and there are accommodations to suit most budgets, albeit high-end housing is rather restricted.

The resorts are typically open from the end of November until the beginning of May.