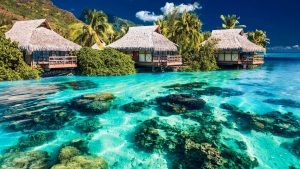 North AmericaBarbadosHow To Travel Around Barbados

Driving is on the left-hand side. The bus system is extensive, cheap and fast if you are travelling anywhere on the main route, but a car (or mini-mobile) is the only way to see many of the more remote sights. Many drivers will book you a bus when they see you are coming from out of town, reflecting the typical welcoming atmosphere. Buses are operated by the Barbados Transport Board (blue) and are quiet. Private operators include yellow buses, which play loud music, and private minibuses (white), which tend to be cramped and crowded. Both types of private transport are often driven very fast and recklessly. All charge the same fare (B$2). Yellow buses and minivans give change and even accept US dollars. BTB buses accept Barbados dollars and do not give change.

There are also more than enough taxis to take you anywhere on the island at reasonable prices. They do not use meters and it is best to negotiate the price before you get in. However, most taxi drivers are honest and you are unlikely to be overcharged. Ask the hotel management or friendly locals for the price of a taxi ride to your destination.

Renting a car is expensive. If you are travelling by car, be aware that the island’s roads are generally quite narrow, with the exception of the ABC Highway, where extensive works are being carried out on several long sections to the west coast to widen the road and create additional lanes. Extreme caution is advised as many of the roads on the island have sharp curves and steep inclines and are generally quite bumpy, although most are paved.

Many of these “highways” have no pavements, allowing pedestrians to share the roadway. Many bus stops are also on the side of the road where there are no pavements. Also beware of improvised passing lanes, as slow drivers on two-lane roads are often overtaken by drivers behind them. Road signs can be quite confusing (they often show the two nearest towns/villages in reverse order – i.e. starting with the furthest one), so be prepared to get lost: just ask for directions as people are always willing to help you.

With most local car rental companies, comprehensive insurance is automatically included in the rental price, except for damage to the car’s tyres, reflecting the poor condition of the back roads and the tendency of foreign drivers to misjudge the lanes and drive into curbs.

It is also possible to rent mopeds and bicycles to explore places that are difficult to access by car. However, this is not recommended due to the poor condition of many side and service roads. With the exception of the main road, all other roads are dangerous for cyclists due to the lack of pavements, frequent potholes, sharp bends and the speed of local buses.

Another fun way to get around is to rent a moke (open car/buggy), which is available at many local car rental agencies.

By air Sir Grantley Adams International Airport (IATA: BGI) is a major international airport for the size of Barbados, offering dozens of flights in high season from the UK and Canada, as well as the US. British Airways and Virgin Atlantic have numerous flights to Barbados, while American Airlines is...

Regions in Barbados There are eleven parishes on the island of Barbados, which can be usefully divided into four regions: BridgetownThe capital of Barbados and its surroundings in the parish of Saint Michael.East Central BarbadosThe parishes of Saint Andrew, Saint George, Saint John, Saint Joseph and Saint Thomas. The east coast...

Barbados offers everything from cheap bed and breakfast guesthouses starting at less than $40 per day for a single person in summer to luxury accommodation in some of the world's best hotels for $1,600 in high season. Flats and flat hotels in Barbados offer the comfort of a hotel room...

The west coast has many luxury resorts, and it and the inland highlands have many historic sites with scenic views. Botanical Garden. Inside is a beautiful botanical garden with more information about wildlife than most similar places in the world.Cricket, Kensington Oval, Bridgetown. Check if there is a match to...

World-class water sports, including surfing at the Soup Bowl on the east coast and various breaks along the west coast when the swell is strong. The south coast offers great waves and a spot on the World Windsurfing Championship at Silver Sands. Drive inland and visit various plantation houses where...

Food in Barbados The flying fish, the symbol of the islands, can be seen on coins, banknotes and menus. The flying fish is usually served lightly breaded and fried, with a yellow sauce. Be aware that this yellow sauce is made from very hot scotch bonnet peppers and onions in...

The national currency is the Bajan dollar, but US dollars are accepted in almost all shops and restaurants. The exchange rate is fixed at 2 Bajan dollars for one US dollar. Remember that hotel money changers may insist on charging an additional percentage for the exchange (usually 5%). There are...

Despite or perhaps because of the tropical climate, Bajans tend to dress conservatively when they are not at the beach. A bikini is not welcome in town and certainly not in church. Bajans are particularly sensitive to good manners and saying "hello" to people, even strangers, earns their respect. If you...

Barbados has produced several great cricketers, including Sir Garfield Sobers and Sir Frank Worrell. The citizens are officially called Barbadians. The term "Bajan" (pronounced BAY-jun) may be derived from a local pronunciation of the word "Barbadian", which sometimes sounds like "Bar-bajan". The biggest carnival cultural event on the island is the...

Stay Safe in Barbados Although it is generally a safe place to travel, crime has increased. Tourists should avoid certain high-risk activities, such as walking on secluded beaches, by day and by night, walking in unfamiliar residential areas or walking in remote areas away from main roads. Tourists, especially women,...