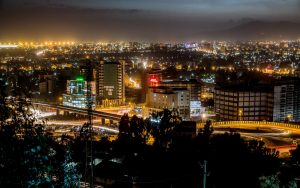 Ethiopia’s first official language is Amharic. The language is a Semitic language linked to Hebrew and Arabic, and you will recognize some cognates if you are familiar with either. Everyone in the nation speaks Amharic to some degree, regardless of their native language. The Ge’ez script is used to write the language.

Many individuals under the age of 40 in major cities speak some English. (The Commonwealth form of English, as used in neighboring Kenya and Uganda, is the main foreign language taught in schools, with textbooks provided by both the British Council and the EU.) Find local schoolchildren to translate for you in remote regions for a price that may be close to nothing. (Ethiopians speak English in a unique manner. It may be difficult to comprehend at first due to the highly accented nature of the language. However, after you’ve gotten accustomed to how they sound certain English terms, it’ll be pretty intelligible.) Due to the influence of the previous Derg government, older Ethiopians, particularly those from the Tigray area or Eritrea (which was formerly a state of Ethiopia), may speak Italian, while other seniors may speak Russian or Cuban-accented Spanish.

Tigrinya, which is also written in Ge’ez, is the main language in the north, particularly in Tigray. Amharic, on the other hand, is widely understood. Oromifa, also known as Afaan Oromo, is extensively spoken in the central highlands. Oromifa use the Latin alphabet. Somali is widely spoken in the Ogaden area, which is mainly situated in Somali regional state (near the borders with Somalia and Somaliland), and is written in a Latin script; Arabic is also widely spoken, with a Yemeni influence. French becomes somewhat more prevalent towards the border with Djibouti.

Telephone The dialing code for Ethiopia is 251. Addis Abeba's city code is 011. (or 11 from outside Ethiopia). Mobile Ethiopia has among of the poorest connections in the world. Ethio Telecom (ETC) operates the mobile telecom network, which utilizes GSM (like in Europe/Africa) and has limited 3G (1x EV-DO service) and...