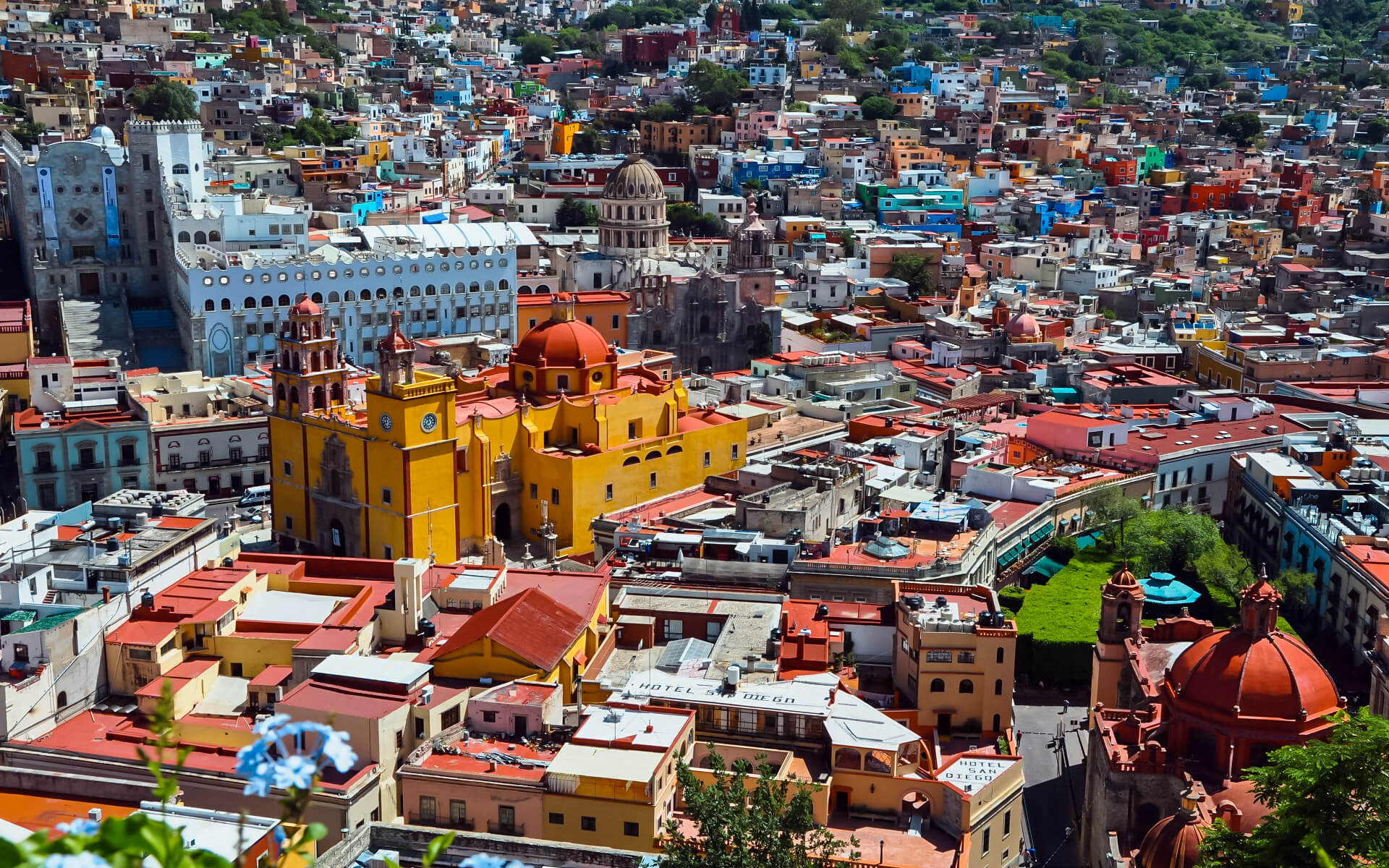 Guanajuato is a city and municipality located in central Mexico. It serves as the capital of the same-named state. It is included in the Bajo macroregion. It is located in a small valley, which results in tiny and twisting streets. The majority are narrow lanes inaccessible to automobiles, while some are lengthy stairwells ascending mountain slopes. Numerous thoroughfares in the city are partly or entirely subterranean. Numerous tiny plazas and colonial-era homes, churches, and civic structures constructed of pink or green sandstone can be seen throughout the historic district.

Guanajuato was founded and grew as a consequence of the finding of minerals in the surrounding mountains. Due to the wealth of the mines, the city was one of the most powerful throughout the colonial era. At its peak, one of the mines, La Valenciana, produced two-thirds of the world’s silver.

The city is home to the Mummy Museum, which houses naturally mummified remains discovered between the mid-19th and early-20th centuries in the municipal cemetery. Additionally, it is the site of the Festival Internacional Cervantino, which attracts artists and entertainers from across the globe as well as Mexico. Guanajuato was the scene of the first action of the Mexican War of Independence, which took place in the Alhóndiga de Granaditas between insurgent and royalist forces. In 1988, the city was designated a UNESCO World Heritage Site.

Guanajuato is a city in central Mexico that serves as the capital of the same-named state. It is located 390 kilometers (about 250 miles) northwest of Mexico City. The city’s name translates as “Place of Frogs” in the indigenous language spoken there, and hence the frog is the city’s official pet.

Guanajuato is a lovely colonial mountain town. Numerous visitors and residents see this city as the most beautiful in Mexico. It was a significant silver mining town in the past, and several of the mines remain operational. Because the city is situated on very mountainous terrain, practically every point in the city is slanted. The city is connected by an underground network of tunnels that double as highways, making it really unique in the world.

Unlike other Mexican towns, Guanajuato was founded as a consequence of miner camping after the discovery of silver veins between 1540 and 1558, which ultimately resulted in a bigger city. In 1558, a large silver vein was found in Guanajuato, and over the following 250 years, it generated about a third of all silver on the planet. Spanish King Philip V bestowed city title to the city in 1741. Mining provided prosperity to this town, which was reflected in its architecture and way of life.

Guanajuato’s old town and neighboring mines were designated a UNESCO World Heritage Site in 1987 and have been listed as one of the world’s best tourism destinations by various travel publications.

Guanajuato is situated in central Mexico, north of Mexico City, and shares a border with Zacatecas, San Luis Potosi, Michoacán, Querétaro, and Jalisco. It has a total size of 30,589 km2 and is rated twenty-first out of thirty-one states. It is situated at an average elevation of 2,015 meters (6,611 feet) above sea level and is separated into three geographical zones of Mexico: the Sierra Madre Oriental, the Mexican Plateau, and the Trans-Mexican Volcanic Belt. Sierra Gorda and Sierra del Azafrán form the Sierra Madre Oriental in Guanajuato. The Mexican Plateau runs across the state’s center. It is divided into many parts inside by low-lying mountain ranges such as the Sierra de la Cuatralba and Sierra de Cubo. The Trans Mexican Volcanic Belt runs across the state’s south and includes the Bajo region, the Altos de Jalisco, and the valleys area in the far south. The state is traversed by various mountain ranges, with peaks ranging in elevation from 2,300 to 3,000 meters. Mountain ranges average 2,305 meters above mean sea level, whereas flat regions average roughly 1,725 meters. The Sierra Gorda to the north, the Sierra de Guanjuato to the southeast, the Comanja to the northwest, and the Codorniz to the east are all significant mountain ranges.