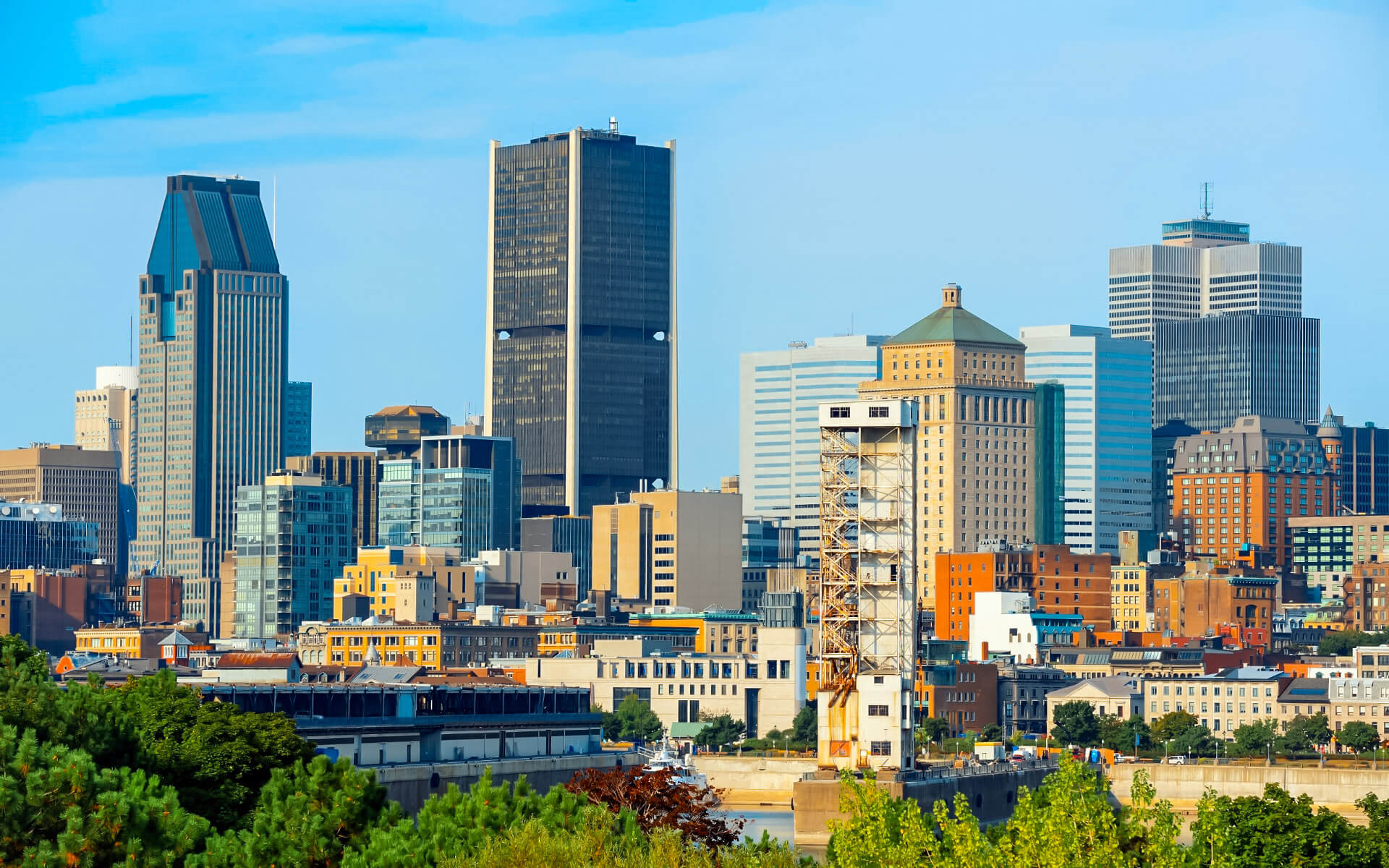 Montreal is the most populous city in Quebec and Canada’s second most populated municipality. Originally known as Ville-Marie, or “City of Mary,” it is named after Mount Royal, a three-peaked hill in the city’s centre. The city is located on the Island of Montreal, which was named after the same source as the city, as well as a few considerably smaller surrounding islands, the biggest of which is Île Bizard. It has a four-season continental climate, with warm to hot summers and freezing snowy winters.

The city has a population of 1,649,519 in 2011. The metropolitan area of Montreal had a population of 3,824,221 and a population of 1,886,481 in the urban agglomeration, which includes all municipalities on the Island of Montreal. The population of the Montreal metropolitan region was estimated to be 4.1 million in 2014. French is the city’s official language, and it is spoken at home by 56.9 percent of the city’s inhabitants, followed by English (18.6 percent) and other languages (19.8 percent) (in the 2006 census). In the greater Montreal Census Metropolitan Area, 67.9% of the population speaks French at home, while 16.5 percent speak English. With 56 percent of the population speaking both English and French, Montreal is one of the most multilingual cities in Quebec and Canada. After Paris, Montreal is the world’s second biggest predominantly French-speaking metropolis.

Historically Canada’s commercial capital, it was overtaken in population and economic power by Toronto in the 1970s. It is still a major hub for business, aircraft, finance, pharmaceuticals, technology, design, education, culture, tourism, gaming, cinema, and international affairs. Montreal, the headquarters of the International Civil Aviation Organization, is one of three North American cities home to United Nations institutions (together with Washington, D.C. and New York), and it also boasts the continent’s second-highest number of consulates. Montreal has also been designated as a UNESCO City of Design. According to the International Congress and Convention Association’s (ICCA) preliminary 2009 rankings, Montreal was designated North America’s top host city for international association events in 2009. According to the 2016 edition of QS Best Student Cities, Montreal is the seventh best city in the world to be a university student. The Economist Intelligence Unit placed Montreal 14th out of 140 cities in its 2015 Global Liveability Ranking.

Throughout its history, Montreal has hosted a number of major conferences and events, including the 1967 International and Universal Exposition and the 1976 Summer Olympic Games. It is the only city in Canada to have hosted the Summer Olympics. The Canadian Grand Prix of Formula One, the Montreal International Jazz Festival, and the Just for Laughs festival are now held in the city. Montreal was designated a Beta+ world city in 2012.

Montreal (French: Montréal) is the provincial capital of Quebec. Quebec City is the province’s political capital, while Montreal is its cultural and economic center, as well as its principal entrance point. It is the second biggest city in Canada, and it has a well-deserved reputation as one of the liveliest cities in North America. Montreal is the world’s second-largest French-speaking (as a mother tongue) city, behind Paris. At the same time, it is one of the most bilingual cities in Canada, with a Francophone majority and a sizable Anglophone minority (approximately a quarter of the population), and the majority of the Francophone population is also fluent in English. Montreal has a population of roughly 1.9 million people, with a metro population of 4 million.

According to legend, Montréal is the only city in the world where the sun “rises in the south.”

Montrealers utilize an unusual compass, with the river and the mountain serving as cardinal points. When you’re downtown, the St. Lawrence River is “south,” and Mount Royal is “north,” hence the West Island and East End are proper in both names and orientations. Visitors are sometimes perplexed by this since the “East” End is really north and the “West” Island is south, and the St Lawrence River runs practically north-south at this point.

Most local maps, as well as the city’s roadways, follow this standard. Autoroute 15 north, for example, flows northwest, whereas Autoroute 40 east runs northeast.

To emphasize this point, a map of Montreal will show that the “south end” of Victoria Bridge is really farther north than the “north end.”

Montreal is located in the southwest corner of the province of Quebec. The city encompasses the majority of Montreal’s Island, located at the convergence of the Saint Lawrence and Ottawa Rivers. The port of Montreal is located at one end of the Saint Lawrence Seaway, a waterway that connects the Great Lakes to the Atlantic. Montreal’s position is defined by the Saint Lawrence River to the south and the Rivière des Prairies to the north. The city is named after the island’s most conspicuous topographical feature, a three-headed peak known as Mount Royal, which rises 232 meters above sea level.

Montreal is located in the Montreal Metropolitan Community and is bounded to the north by the city of Laval, to the south by Longueuil, Saint-Lambert, Brossard, and other municipalities, to the east by Repentigny, and to the west by the towns of the West Island. Montreal encircles the anglophone enclaves of Westmount, Montreal West, Hampstead, Côte Saint-Luc, the Town of Mount Royal, and the francophone enclave Montreal East.

Based on GDP, Montreal has the second-biggest economy in Canada and the largest in Quebec. Today, the city is an important center of trade, finance, industry, technology, culture, and international affairs, as well as the headquarters of the Montreal Exchange.

Aerospace, electronic products, pharmaceuticals, printed goods, software engineering, telecommunications, textile and garment manufacturing, tobacco, petrochemicals, and transportation are among the industries. The service industry, which includes civil, mechanical, and process engineering, finance, higher education, and research and development, is also significant. In terms of aerospace employment, Montreal was the fourth-largest center in North America in 2002.

The Port of Montreal is one of the world’s biggest inland ports, carrying 26 million tonnes of cargo every year. It is still one of Canada’s most significant ports, serving as a transshipment hub for grain, sugar, petroleum products, equipment, and consumer goods. As a result, Montreal is Canada’s railway center and has long been a vital rail city; it is home to the headquarters of the Canadian National Railway and, until 1995, the headquarters of the Canadian Pacific Railway.

Montreal is a major film and television production center. The city is home to Alliance Films’ headquarters and five studios of the Academy Award-winning documentary producer National Film Board of Canada, as well as Telefilm Canada, the national feature-length film and television financing agency, and Télévision de Radio-Canada. Montreal is a popular shooting site for feature-length films, and occasionally serves as a stand-in for European cities, due to its unique architecture and wide availability of film services and crew people. Many well-known cultural, film, and music events (such as Just For Laughs, Just For Laughs Gags, Montreal International Jazz Festival, Montreal World Film Festival, and others) are also held in the city, contributing considerably to its economy. It is also home to the Cirque du Soleil, one of the world’s major cultural businesses.

The video game business has been thriving in Montreal since 1997, when Ubisoft Montreal first opened its doors. Recently, the city has attracted world-class game development and publishing studios such as Ubisoft Montreal, EA, Eidos Interactive, Bioware,Artificial Mind and Movement, Strategy First, THQ, and Gameloft, owing to the high quality of local specialized labor and tax breaks available to corporations. Warner Bros. Interactive Entertainment, a subsidiary of Warner Bros., has announced the opening of a video game studio. It will be Warner Bros.’ first studio established, rather than acquired, and will produce games for such Warner Bros. properties as Batman and other titles from their DC Comics portfolio. The studio will employ 300 people.

Montreal is prominent in the financial business. In the Greater Montreal Area, the industry employs around 100,000 people. Montreal is placed 21st in the Global Financial Hubs Index, an assessment of the competitiveness of financial centres throughout the globe, as of March 2016. The city is home to the Montreal Market, Canada’s oldest stock exchange and the country’s sole financial derivatives exchange. The corporate offices of the Bank of Montreal and the Royal Bank of Canada, two of Canada’s largest banks, were located in Montreal. While both banks’ headquarters have been relocated to Toronto, Ontario, their legal corporate offices remain in Montreal. Two smaller banks, National Bank of Canada and Laurentian Bank of Canada, have their headquarters in the city. The Caisse de dépôt et placement du Québec, an institutional investor with assets of $248 billion CAD, is headquartered in Montreal. Many international businesses in the financial industry, notably HSBC, Aon, Société Générale, BNP Paribas, and AXA, maintain offices in Montreal.

Numerous photocopy businesses, as well as many cafés and bookshops, feature internet terminals. In the McGill and Berri-UQAM metro stations, the Bell phone company has placed public internet terminals (cash or credit cards).

There are also long-standing cyber/internet cafés (without the café aspect) such as Battelnet 24 at several sites across Montreal, including one on the mezzanine level of the Guy-Concordia metro’s rue Guy entrance.

Of course, the finest form of internet is free internet. Île Sans Fil offers free wireless internet access in cafés and other public spaces across the city. Look for the label on the exterior of participating establishments. The downtown Eaton Centre has free wifi internet connection in the food court.

In addition, the Grande Bibliothèque (Great Library) contains numerous free Internet terminals, and you may receive a library card (free to Québec citizens with proof of residence) to use it there.