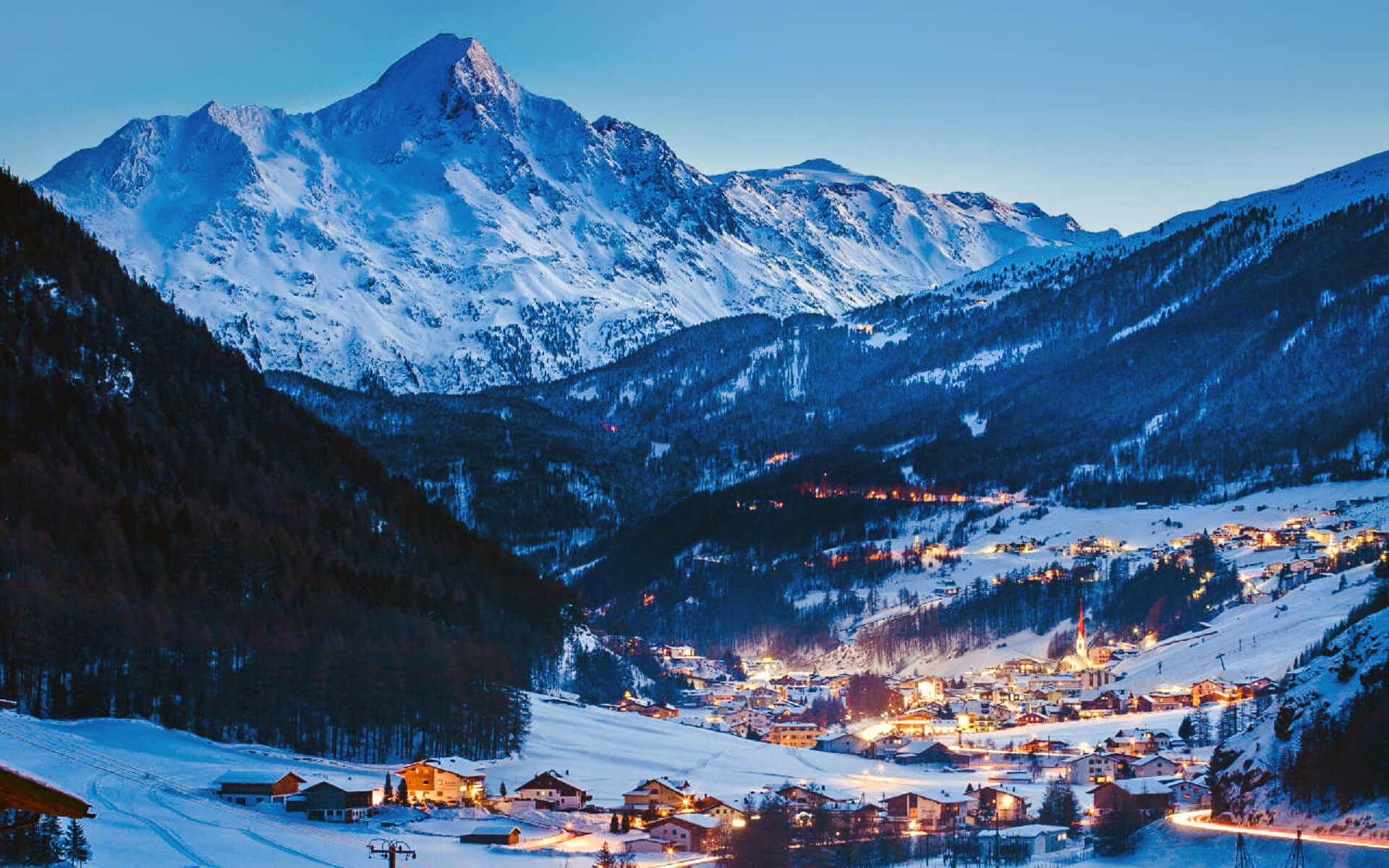 Sölden is a ski resort in the Austria (Tirol), Tiroler Oberland (region), Imst (District)). There are 144.2 km of slopes and 1.9 km of ski paths for skiing and snowboarding. The visitors are transported through 31 elevators. The winter sports area is located between 1,350 and 3,340 meters above sea level. The airport in Innsbruck is just an hour distant, while the railway station in Tztal is only 40 minutes away (which provides bus services to take you to the resort).

Solden is a very tight town with a river flowing through it and classic Tyrolean style buildings, with most hotels, restaurants, and clubs on the main street, which is overshadowed by the stunning parish church.

The major resort is linked by three smaller communities. Hochsolden, at 2,090m, is the highest up – it’s ski-in ski-out and offers an exclusive ambience enhanced by historic wooden construction. In terms of height, Zwieselstein and Vent are located between Solden and Hochsolden. Nearby resorts, such as Obergurgl, are readily accessible from all four.

The atmosphere is undeniably one of Solden’s biggest attractions. After the lifts shut and the vibrant après ski begins, the main town is buzzing, particularly around the Giggijoch and Gaislachkogl gondolas.

The Solden/tztal ski pass spans 140 kilometers and includes two mountains – Giggijoch and Gaislachkogl – as well as two glaciers – Rettenbach and Tiefenbach. With three peaks over 3000m – Gaislachkogl (3,058m), Tiefenbachkogl (3250m), and the highest Schwarze Schneide – the region is unique in Austria (3340m). Solden’s 33 new lifts can transport 68,000 passengers per hour (which means less queue), and this is one of Austria’s first resorts to offer free WiFi in the major ski areas for the odd tweet on the slope.

The magnificent Otztal Valley gained worldwide news in 1991 when its most ardent supporter, a 5,300-year-old man, was discovered perfectly preserved in a high Alpine snowdrift with “the skin of a roasted turkey.” Otzi, a Neolithic Age hunter, discovered the hard way that Solden’s terrain is tough. The Otztal Arena Solden, which stretches to 3,249 meters, is magnificent by Austrian and even Swiss standards, a winter playground reached by a cutting-edge lift system and lined with 48 snow cannons for good measure.

Every October, the winter ski and party season officially starts out. At the season’s first World Cup, Hermann Maier takes on the viciously frozen difficult courses on the Rettenbach Glacier. The glaciers of Rettenbach and Tiefenbach, which were linked to the larger ski area in 1998-99, provide a superwide playing field for the world’s fastest skiers. You’ll be amazed as well.

Solden’s three skiable 3,000ers are each highlighted with a magnificent viewing point surrounded by shimmering ripples of snowy peaks. The first is at the Gaislachkogel gondola, a 3,058-metre-high circular deck. The next is a frightening gangplank at Tiefenbachkogl that hangs above thin air and glances fiercely into the face of Austria’s second highest mountain, the Wildspitze. The third, Schwarze Schneid, is a 10-minute trek up to an imposing column with a superb 360-degree chart depicting over 20 surrounding peaks.

With glacier skiing and three peaks over 3000m, conditions are generally superb throughout the season. You won’t have to wait long either, since the lifts transport a total of 68,000 skiers every hour.

Special events such as the Gay Snowhappening and Electric Mountain Festivals may influence when you should ski. The Gay Snowhappening is usually an action-packed week at the conclusion of the season, while the Electric Mountain Festival takes place over 6 or 7 days during the season, with performances by big-name DJs (David Guetta in 2012). Even if you don’t make it here for these, there are weekly events like as the Night Ski show – which normally runs until March – and the Söldenparty, so there’s always something fun going on!

The quietest periods of year are usually early in the season, around mid-January, and at the conclusion of the season. Ski passes are often cheaper at these times as well, which is fantastic if you want to save money.

A good selection of ski schools, including ‘Yellow Power,’ making this a wonderful spot to learn and develop. Innerwald (at the foot of the Gaislachkogl gondola) contains several good nursery routes where beginners may learn the fundamentals without competing with quicker skiers.

There are 67km of blue routes accessible for novices, including some especially nice runs on the Tiefenbach glacier. Practice on the Blue 38 from the Tiefenbach’s summit — it’s a spacious, straightforward, but lengthy 11km descent. The Blue 13 on Giggijoch is another beginner-friendly route since it is broad and well-kept.

This is also an excellent location for intermediates. If you want a challenge, there are approximately 50km of red routes and 20% of the ski area is above red difficulty, with Giggijoch and Gaislachkogl giving some fantastic descents. The red runs back to the bottom of Giggijoch (like 19) from the top of the Gondola or from Hochsolden are fantastic for intermediates, and red route 1 from the top of the Gaislachkogl lift is also fantastic (which has a near 1000m drop along its route). A lot of additional Gaislachkogl runs are as difficult.

Advanced skiers will also find a good variety of routes. The steep 15km descent from Schwarze Schneide to Gaislachkogl — with a 2000m elevation rise – is perhaps the most difficult on the route. There are also some off-piste options — Wasserkar is one of the best powder places and is readily accessible from the top of the Gaislachkogl gondola.

The massive 6-hectare Almdudler snow park is a particular appeal for freestylers. It has a good variety of obstacles like as boxes, jumps, and rails and is located directly under two chair lifts, the Hainbachkar and Silb.

The ski season in the region spans from December to April, with exceptional coverage available to guarantee skiers and snowboarders have the finest possible coverage. There are two glacier ski slopes, Rettenbach and Tiefenbach, which provide exceptional snow conditions, and snow producing systems cover 76 percent of the ski area.

With workers visiting the slopes on a regular basis to guarantee adequate maintenance, you can anticipate superb conditions across the resort. There is plenty of diversity to select from in the region, with runs for beginners, intermediates, and professionals.

Apres-ski, restaurants and other activities in Sölden

Solden has evolved from a vibrant resort to a more refined ski area in recent years. While there are still nightlife choices for visitors, it is now simple for families to join in on the excitement in this lovely location.

You may stop for a relaxing drink at one of the quaint mountain huts or umbrella bars, with Gampe Alm, Fuchsloch, and Halli Valli all providing superb service and a terrific chance to socialize with locals.

Solden boasts a number of great restaurants, including Salino and Giggi Tenne, which offer Italian and international cuisine, respectively.

If you’re exhausted after a day on the slopes, you may visit one of the resort’s numerous health spas, such as Michaela Mader Physio and the Das Central massage parlor.

Solden caters well to families – the Chalet Karl Riml, which is just 200 meters from the main town. In terms of the ski area, you’ll have 140km to explore, with a fair range for all skill levels. Solden offers a number of ski schools, including Yellow Power and Ski School Solden Hochsolden, for individuals starting to ski or trying to improve their technique. There are also some wonderful beginning routes, such as the nursery runs near Innerwald, for those just starting out. Overall, 47 percent of the routes are blue (we favor the Blue 38 on the Tiefenbach glacier), making the resort ideal for beginners. More daring skiers may choose from a variety of routes, including the 15-kilometer run from Schwarze Schneide to Gaislachkogl. For lunch, the mountain eateries welcome families with open arms — the Stabele Schirmbar offers a menu to suit everyone (they do super burgers).

Once the skiing is done for the day, there’s plenty to do as a family. Ice skating and tobogganing are popular sports, and every Wednesday until March, a night ski display with fireworks and a torchlight descent should keep everyone amused for the evening.

We offer the greatest family vacation packages – and our ski consultants can assist you in finding your perfect vacation. Most vacations include flights, transfers, and accommodations, but we also offer self-drive and accommodation-only options.

Solden is hard to beat for groups, from the slopes to the après-ski. Routes cater to all skill levels, from simple beginning runs in Innerwald to more difficult routes on Gaislachkogl. While the skiing is excellent, the après-ski is much better — Solden has several fantastic clubs and bars, such as the Fire & Ice and Bierhimml nightclubs, which are ideal for some exciting après-ski. If you want to have a couple drinks while watching some live sports, go to Chris & Co. After a day on the slopes, the stunning Aqua Dome and Freizeit Arena are the locations to go for some fantastic treatment in a gorgeous environment.

There is also plenty of accommodation – chalets are often big enough to accommodate parties, and properties such as Chalet Karl Riml and Chalet Paul Gruner are just 200m from the town. Look for our hotels labeled ‘Great for Groups’ – our favorites are the Erhart and Grauer Bar.

Throughout the season, a variety of events draw large audiences and create a lively environment. These include the Electric Mountain Festival, which takes place on the mountain six or seven times during the season and has DJs performing on the mountain. There are also weekly activities to look forward to, such as a Wednesday Night Ski Display, which includes a torchlight show, pyrotechnics, and live music. You may need to purchase a ticket, but it is well worth it!

The majority of our packages include flights, transfers, and lodging. If you’d rather drive yourself, our self-drive choices might be precisely what you’re searching for. If everyone is traveling from various places, renting accommodation-only may be the best option — contact our ski consultants for assistance in getting everyone organized and to the slopes!