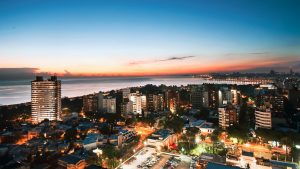 Spanish is widely spoken across the country. The pronunciation and usage of the vos pronoun instead of t is almost identical to the Spanish variant used in Argentina, commonly known as Rioplatense Spanish. However, it differs significantly from Spanish spoken in Spain in terms of pronunciation, grammar, and vocabulary. If you are unfamiliar with the local language, be prepared to often ask individuals you are speaking with to repeat themselves.

Despite the fact that most Uruguayans have learned English in school, they do not speak or utilize it. Some Uruguayans, however, have learned English at private institutions and are fluent in the language. There are few English speakers outside of Montevideo, Colonia, and Punta del Este. Most tourist areas (shopping malls and Punta del Este) have someone who speaks English, and expensive restaurants and those catering to visitors often have someone on staff who knows English. In reality, knowing basic Spanish is required for independent travel in Uruguay.

Portuol (or Brasilero) is a blend of Portuguese and Spanish that is often spoken along the Brazilian border.

If you wish to learn Spanish at a language school, consider the Grupo de Turismo Idiomático, a private sector initiative sponsored by the Ministry of Tourism.