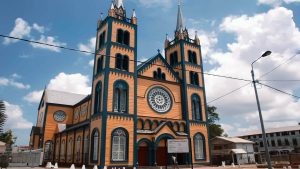 Accommodation and meals are reasonably priced. Retail costs for clothes, gifts, and other items are comparable to those in the United States.

The following items are highly worth purchasing:

The Suriname dollar is the native currency, and it is denoted by the symbol SRD (which is also the ISO 4217 international currency code). The money may be freely converted (but nearly impossible to get rid of outside Suriname except for the neighbouring countries and one exchange bureau in Amsterdam airport).

Currency exchange is available at all banks and most cambios. ATMs are accessible in Paramaribo and the majority of the bigger towns in the north. The RBTT bank’s ATMs accept the majority of foreign bank cards. Paying using a credit card at stores, hotels, and restaurants is uncommon. Expect an additional fee of 2-6 percent.

Shops in Suriname are typically open from 8:00 a.m. until 16:30 p.m. on Mondays through Thursdays. On Fridays, most businesses stay open until 19:00, while on Saturdays, most shut at 14:00. Chinese stores are springing up all across the nation, even in the most remote villages. They are open till late at night.

Regions in Suriname Paramaribo The capital city of Paramaribo and its immediate surrounds, which are home to over half of the country's population, are as busy as it gets. It boasts a lovely historic center and several cafés and restaurants that appeal to any traveller's needs. It is included on UNESCO's...

Food in Suriname Because of the ethnic diversity, a wide range of unusual foods are accessible. Indian (especially roti with chicken), Chinese, Javanese (Indonesian), and Creole cuisines are available. Javanese Although the term "Indonesian cuisine" may seem to be accurate, the Indonesians in Suriname are mainly, if not entirely, from the island...

Suriname's official language is Dutch. English is commonly understood. The Dutch repressed the creole language Sranang Tongo for many years, but it is today the most commonly spoken language in Suriname. It is the native language of the majority of Surinamese people and is utilized as a lingua franca amongst...

Suriname was settled by Dutch from the Dutch province of Zeeland in the 17th century, although periods of British rule lasted until 1816. The colony was mostly utilized for sugar, coffee, and cocoa plantations, where many African slaves were worked to death. Slavery was abolished in 1863, and contract laborers...

Stay Safe in Suriname If you are worried about your safety, avoid going out at night alone. When feasible, ride your bike. Avoid the Palm Garden at night in Paramaribo since it is a well-known crime hotspot where considerable drug trafficking occurs. Because the police force is limited in size, it...