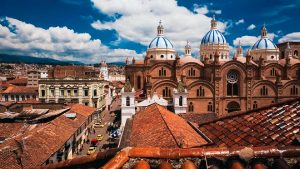 South AmericaEcuadorHow To Travel Around Ecuador

Intercity buses go almost everywhere in Ecuador. Many cities have a central bus station, called the Terminal Terrestre, where you can buy tickets for the different bus routes that serve the city. Long-distance buses generally cost between $1 and $2 an hour, depending on the distance and type of service; groups can negotiate discounts. Buses run frequently on the main roads.

Reservations or advance bookings are not usually necessary, except during peak periods such as public holidays. Bus toilets, if available, are normally reserved for women. However, men are allowed to ask for the bus to stop so they can relieve themselves. The bus journeys themselves are often very beautiful, with views of the mountains in the clouds. These changes in altitude cause the same problems with ear pressure that occur on air travel.

The bus driver will stop en route to allow other passengers to board. Many buses arrive at their destination with passengers standing in the aisle. There are some first class buses, called “Ejecutivo”, which cost a little more than ordinary buses. They are generally more comfortable and safer.

It is possible to rent a car in major cities such as Quito, Guayaquil and Cuenca, where car rental agencies are usually located outside airports. Ecuadorian roads are always well maintained in the cities, but poorly maintained in the countryside.

However, there are few laws for drivers in Ecuador and they are rarely (if ever) enforced. If you choose to drive, you take your life into your own hands. If you only drive in cities like Guayaquil or Quito, it may be a little safer, but driving in the countryside would be crazy.

In addition, Ecuadorian roads are rarely maintained (especially along the coast). Potholes are common and it is very likely that one or two tyres will burst if you hit one.

Taxis are widely available. Taxis are usually yellow with the taxi licence number prominently displayed. Taxis in Quito are metered (fares under $1 are rounded up to the minimum fare of $1). Agree a fare before you get in, or ask the driver to use the meter (which is often cheaper than a negotiated fare); short journeys usually cost no more than $1 or $2, and for longer journeys you should usually pay no more than $10 an hour, or more. In the evening, fares are often twice as high. As in any country in Latin America (or the world), you should not get into a taxi without a licence. It’s a good way to get hijacked.

Domestic flights to major cities on the continent cost between US$50 and US$100 one way, and there are sometimes special return flights at about the same price. Flights between the larger cities are operated by jets, while some of the smaller cities are served by propeller planes. The national airlines in Ecuador are Lan Ecuador, Tame, AviancaEcuador (formerly Aerogal and VIP) and Saereo. Most airlines in Ecuador offer excellent service and relatively new aircraft. You can buy domestic tickets from agents or directly from the airlines – some sell tickets online and you can buy them at the airport or at ticket offices for those that don’t.

Hitchhiking is possible in Ecuador. Many people drive pick-up trucks in which you can simply throw your backpack in when they take you away.

On roads with little bus traffic, trucks may pick up passengers or hitchhikers who ride either in the back or in the cab. In some cases the driver charges the usual bus fare, in other cases he simply takes a passenger for the company and refuses to pay the fare.

By air Quito's Mariscal Sucre International Airport (UIO) is located in the municipality of Tababela, approximately 30 km (20 mi) east of Quito. Travellers with very early departures or very late arrivals from Quito airport, as well as those not staying in Quito but travelling elsewhere, may consider accommodation in...

Regions Amazon rainforestAndes HighlandsCoastal lowlandsGalapagos Islands - Isolated archipelago world-famous for its unique wildlife and Darwin's evolutionary research. Cities Quito - Second highest capital in the world, with a well-preserved colonial centre. The weather is generally spring-like and relatively unpredictable throughout the year, and changes quickly.Ambato - The central city of Ecuador....

Currency Ecuador adopted the US dollar (USD) as its currency in 1999. Other types of currencies are not readily accepted. Ecuador has its own coins. These are exactly the same size and weight as American coins, and both are accepted. U.S. dollar coins are widely used and preferred over $1 notes....

Internet Internet cafés are almost everywhere in the big cities and in many of the smaller towns. The cost is between $1 and $2 per hour in the big cities, and the better places have high-speed access. In some cafés, restaurants and hotels you will find free wifi access, usually...

Pre-Inca Various peoples had settled in the area of the future Ecuador before the arrival of the Incas. Some probably sailed on rafts from Central America to Ecuador, some came to Ecuador by way of the tributaries of the Amazon, some came from the north of South America, and some...

Stay Safe in Ecuador Tourists should use common sense to ensure their safety. Avoid problems by not showing large sums of money, not visiting areas close to the Colombian border, staying away from civil unrest and not using the side streets of major cities at night. The biggest threat in...