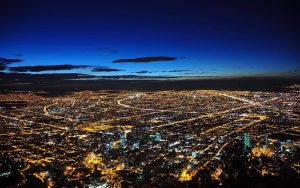 Colombia’s currency is the Colombian peso, but the symbol you will encounter is the $. Most banks and exchange offices accept major world currencies such as the US dollar and the euro.

ATMs are widely available, with different withdrawal limits. The banks with the highest limits are Citibank, (1,000,000 COP, but charges extra, so gives the same effective rate as) Bancolombia (600,000).

In nice restaurants, a 10% service charge is usually added to the bill (otherwise you have to add it yourself). Tipping taxi drivers is not common. Most “tips” are simply rounded up to the nearest thousand pesos (e.g. rounding up a coffee bill from 6,700 to 7,000). Tipping private tour guides is not mandatory, but it is customary to do so if you appreciate the guide.

Note that in some restaurants and bars that include the tip (propina) in the bill, this extra money often does not end up in the hands of the staff serving you. Instead, it is simply kept by the owners. This is why many Colombians pay the bill without tipping (in cash or with a credit card) and then give a cash tip to the staff member (waiter, bartender, etc.) who served them.

The Colombian textile industry is well known and renowned throughout South America and Europe. Clothing, including underwear, is particularly well regarded as being of high quality and very affordable. Leather clothing, shoes and accessories are also of interest to foreigners. The best place to buy both is Medellín, known as the country’s fashion capital, where you can buy very high quality products at very low prices.

Colombian emerald and gold (18k) jewellery can also be very attractive to visitors. A typical Colombian style of jewellery is a copy of pre-Columbian jewellery made with gold, silver and semi-precious stones.

The “mochila”, which means “backpack” in Spanish, is also a traditional, indigenous, hand-woven Colombian bag, usually worn on the shoulder. They are often sold in shopping centres, especially in the Santa Marta/El Rodadero area. Mochilas generally come in three sizes: a large one for carrying large items, a medium one for carrying personal items and a small one for carrying coca leaves. Coca leaves are carried by local tribesmen to reduce hunger, increase energy and combat altitude sickness.

Handicrafts, such as intricately designed jewellery, are often sold in markets and on street corners. Many street vendors approach people and sell T-shirts, shorts, glasses, bracelets, watches, necklaces, souvenirs and humorous pictures. If you want to buy something, this is a good time to practice your bartering skills. In general, you can get down to around 2,000 to 3,000 pesos, but 10% to 15% is the generally accepted rule. For example, if someone is selling a shirt for 10,000 pesos, ask if you can pay 8,000 pesos. Go from there.

If you are not looking to buy anything, a simple “gracias” (“thank you”) and a noncommittal wave of the hand will deter potential sellers.

By air Regular international flights serve the major cities of Bogotá, Medellín, Cali, Barranquilla, Bucaramanga, Cartagena, Pereira and San Andrés, as well as other smaller cities on the borders with Venezuela, Ecuador, Panama and Brazil. There are daily direct flights to and from the USA, Canada, Mexico, Costa Rica, Panama, Spain,...

By air The main domestic airlines in Colombia are Avianca (Colombia's main national airline)VivaColombia (the cheap Ryanair-type airline). This airline offers the cheapest fares, but the worst booking system for foreigners. For 2014, foreign credit cards are not accepted to book a flight. VivaColombia has no offices and hardly any tour...

Regions AndinoRugged Andean landscapes and altiplanos with Colombia's two largest cities, Bogotá and Medellín, as well as beautiful national parks and coffee plantations.Costa NorteColombia's vibrant Caribbean has much to offer, with both historic and modern coastal towns and opportunities for diving, trekking and exploring the jungle and desert.OrinoquíaThe endless eastern...

There is a lot to do in Colombia and you can find parties and celebrations everywhere you go. Colombians especially love to dance, and if you don't know how, they will be happy to teach you. Colombia is known for its exciting nightlife. There are many groups and agencies that...

Food in Colombia In many parts of Colombia, it is common to eat buñuelos (fried cornmeal balls with cheese in the batter) and arepas (fairly thick corn tortillas, often made with cheese and served with butter) with scrambled eggs for breakfast. Bogotá and the central region have their own breakfast...

Post There is no government postal system in Colombia. However, the private company 4-72 is Colombia's de facto postal service, although it tends to be somewhat slow and unreliable. Residents rarely use the 4-72 service and usually turn to courier services such as Servientrega, which has many more branches than...

The official language of Colombia is Spanish. Some indigenous tribes in rural areas continue to speak their own language, but almost all people from these tribes will be bilingual in their own language and in Spanish. If you have recently learned Spanish, you will be relieved to know that the...

Stay Safe in Colombia WARNING: Although security in Colombia has improved considerably, drug-related violence is still evident in some, mainly rural, areas of the country. In particular, the kidnapping of foreigners for ransom - although not as great a problem as at the beginning of the millennium - still occurs...