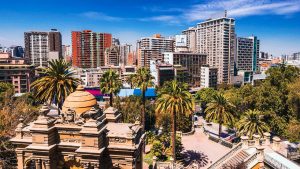 Spanish is the official language of the country and is spoken everywhere. Chileans use their own dialect, Castellano de Chile, with many differences in pronunciation, grammar, vocabulary and slang. Spanish-speaking foreigners will have no trouble understanding it and will simply think it is funny, but non-native speakers often have trouble understanding it, even with years of practice. For example, Chileans tend to omit the “S” sound at the end of their words. They replace this sound with an “H” (for example, the word “tres” is pronounced “tréh”). On the other hand, Standard Spanish is not the first dialect of choice, but people generally speak it quite fluently.

Here are two of the most common Chilean expressions:

Indigenous languages such as Mapudungun, Quechua and Rapa Nui (on Easter Island) are spoken in Chile, but only by indigenous people, who represent less than 5% of the population. Many people who identify with one of these groups are unable to speak the language of their ancestors and speak only Spanish.

Many Chileans understand some French, Italian and Portuguese, and there are also some German speakers, especially in the south of the country, where many German immigrants arrived in the second half of the 19th century and some at the time of the Second World War.

By air The most common point of entry for foreign visitors is Arturo Merino-Benítez International Airport (SCL), located in the municipality of Pudahuel, 15 km (9.3 miles) northwest of downtown Santiago. It is the largest airport in Chile and one of the six busiest in South America in terms of...

By air Chile has a fairly good airport infrastructure. The main flight hub in Chile is the Arturo Merino Benitez International Airport (SCL) in Santiago, from where several airlines fly to the most remote parts of the country. These companies are the three Chilean airlines: LAN Airlines, Sky Airline and...

Regions Northern Chile (Arica-Parinacota, Tarapacá, Antofagasta, Atacama and Coquimbo regions).Visit the driest desert in the world, archaeological ruins and the Andean highlands.Central Chile (Valparaíso, Santiago, O'Higgins and Maule regions).In the heart of the country you can visit the main cities, the famous vineyards and some of the best ski resorts...

Food in Chile Chilean cuisine presents a great variety of dishes that were born from the fusion of the indigenous tradition and the Spanish colonial contribution, combining their dishes, customs and culinary habits. Contributions from German, Italian and French cuisine have been given thanks to the influence of the immigrants...

Currency The currency of Chile is the Chilean peso (CLP). Other currencies are not widely accepted, but most cities have exchange offices with reasonable rates for euros and US dollars. Rates should be posted on prominent signs. As of mid-July 2012, 1 € ≡ CLP600, 1 GBP ≡ CLP763, 1 AUD1...

Telephone Payphones on the street are very susceptible to tampering or vandalism, so it is best to use a phone in a shop or station.Prepaid cards for mobile phones and landlines are sold in most newsagents, supermarkets, petrol stations, pharmacies and telephone retailers.GSM mobile networks are ubiquitous in all major...

Stay Safe in Chile Like most large cities in South America, Santiago suffers from a high rate of pickpocketing and muggings. It is advisable not to walk around the city centre with expensive-looking jewellery or watches, even during the day. Stay alert and be especially careful in all busy areas...