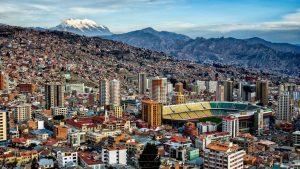 Bolivian cuisine could be described as the original “meat and potatoes” – the latter (called papas by the Quechua) were first cultivated by the Incas before spreading around the world. The most common meat is beef, but chicken and llama are also readily available. Pork is relatively common. Frying (chicharron) is a common method of preparing all types of meat, and fried chicken is a popular fast food; its smell sometimes permeates the streets of Bolivian cities. Guinea pig (cuy) and rabbit (conejo) are eaten in rural areas, although they can sometimes be found in urban restaurants. A common condiment served with Bolivian meals is ll’ajwa, a spicy sauce similar to Mexican salsa.

The almuerzo is a very popular lunchtime meal that usually consists of a starter (entrada), soup, main course (segundo) and dessert. Take a walk down many streets in Bolivian cities and you will see the menu of the day in every restaurant. Most have at least two main courses to choose from. Almuerzos cost between Bs. 15 and 25, depending on the restaurant or “pension”.

The mid-morning snack usually consists of one or more meat-filled buns:

Many people also start the day with a fruit tea:

Vegetarians will find decent to very good options in the country’s gringos. But the markets also offer good vegetarian options (mainly potatoes, rice, a fried egg and a salad for about 7Bs.) In the larger cities there are a few all-vegetarian restaurants (decent to good).

Coca has been part of Andean culture for centuries, and chewing is still very common (and perfectly legal) in Bolivia. You should be able to buy a large bag of dried leaves at the local market. Coca is a stimulant, and it also suppresses hunger. Chewing a bunch of leaves for a few minutes should make your lips and throat slightly numb. Remember the slogan (printed on souvenir T-shirts): Coca no es Cocaina (“The coca leaf is not cocaine”). But cocaine is most certainly an illegal drug. Remember: only chew the leaf; if you eat the coca leaf, you will have a very sick stomach.

Juice bars are available in most markets. Milkshakes (with water or milk) cost 2 to 3 Bs. Locals can be seen drinking Vitaminico, a concoction of egg, beer and sugar, or “Vitima”, which contains coca leaves.

Bolivia’s traditional alcoholic drink is chicha, a whitish, sour beverage made from fermented corn, which is drunk from a hemispherical bowl made from a hollowed-out pumpkin (with a round bottom so it cannot be put down). It is customary to pour a little chicha on the ground before and after drinking, as an offering to Pachamama, the Inca goddess of the earth.

Tarija is located at 1924 metres above sea level and is known for its viticulture, its huge vineyards and its award-winning wines. Therefore, you can visit the beautiful wineries and taste wine there, such as: Campos De Solana, Kohlberg, Casa Vieja, Valle De Concepción, and Casa Real, where the famous Singani is made.