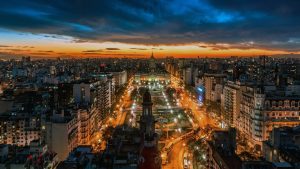 South AmericaArgentinaThings To Do in Argentina

Buenos Aires offers a number of walking tour options. These include the typical tours that can be found in any city, as well as interesting options such as free guided tours, downloadable MP3 tours and even guided running tours.

The most popular sport in Argentina is fútbol (football). If you come to Argentina, you should not miss the opportunity to see a professional match live. Argentina’s fans are very passionate.

There are five teams, called “Los 5 grandes”, which represent the elite of Argentine football:

Argentine polo is famous throughout the world, and the country is now home to all the top-ranked players. First introduced by British settlers in the 1870s, skilled gauchos took up the sport and the passion spread like wildfire. The Argentine Polo Open, usually held in early December each year, is a must-attend event for polo enthusiasts around the world. The sport’s governing body is the Asociacion Argentina de polo, and its website lists all the official tournaments that take place each year. Argentina is also known for the many polo clinics held in clubs and farms around Buenos Aires.

Tennis has grown in popularity over the last three decades thanks to the constant production of top players in Argentina.

Hockey has also become a popular sport, especially among women. The national women’s hockey team, Las Leonas (the Lionesses), has grown in recent years to become a team that competes with the best in the world.

Car racing is also popular: the main championships are Turismo Carretera (Ford versus Chevrolet), TC2000 (touring cars) and TopRace. The most important racing circuit in Argentina is the “Autódromo Oscar Alfredo Gálvez” in Buenos Aires.

Golf in Argentina is an increasingly popular sport, thanks in part to the success of Argentine players such as Angel Cabrera, Andres Romero and Eduardo Romero. There are currently around 280 golf courses in the country, most of them in the Buenos Aires area, including such well-known names as the Jockey Club, Olivos and Hurlingham. On the Atlantic coast, in Mar del Plata, some courses have hosted international events. In Patagonia, there are excellent resort courses such as Llao Lloa, Arelauquen and Chapelco (designed by Nicklaus), as well as the 9-hole course in Ushaia.

By train In recent years, the government has encouraged the reintroduction of long-distance passenger trains, although most lines still operate at low frequency (one or two departures per week). The rail network is very limited, and intercity buses offer better service and faster journeys. Train tickets are very cheap -...

Buenos Aires and the Pampas are temperate; cold in winter, hot and humid in summer. The deserts of Cuyo, which can reach temperatures of 45°C, are extremely hot and dry in summer and moderately cold and dry in winter. Spring and autumn often experience rapid temperature changes; several days of...

For many travellers, Argentina as a country has the same seductive appeal as the tango for which it is famous. Like this iconic couple's dance, Argentina embraces you, constantly moving to the rhythm of the streets and improvising with every step. Urban atmosphere Its major cities are all full of life....

Food in Argentina Argentine breakfast is a little light compared to what travellers from English-speaking countries are used to. It usually consists of a hot drink (coffee, tea, milk) accompanied by some toast, medialunas (croissants, literally "half moons") or bread. Hotels usually offer a free buffet of coffee, tea, yoghurt drinks,...

By telephone You can get a prepaid SIM card from Movistar/Claro/Personal for a few pesos/free in phone shops, you only pay about 20 ARS (about 5 USD) for your starting balance. Inserting the SIM card into your unlocked mobile phone should work, but you may need to enter your passport...

Pre-Columbian era The earliest traces of human life in the area now known as Argentina date back to the Paleolithic, with further traces in the Mesolithic and Neolithic. Until the time of European colonisation, Argentina was relatively sparsely populated, with many different cultures with different social organisations, which can be...