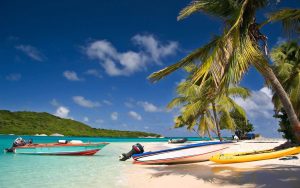 The islands were first settled by the Arawak and Carib peoples who settled there from the South American continent and whose descendants form a small minority of the population. Trinidad was discovered by Christopher Columbus, who claimed it for Spain. Under Spanish rule, many French settlers established cocoa plantations in Trinidad and imported slaves to work on them. The British took over the island in 1798 and abolished slavery. To compensate for the labour shortage, the government encouraged heavy immigration from countries such as Portugal, France, Germany, China and especially India. Trinidad was united with Tobago in the 1880s. In the early 1900s, the country received thousands of immigrants, mostly blacks, from other Caribbean countries, as well as Venezuela and Colombia. After the Second World War, TT was united with several other British Caribbean countries in the West Indies Federation, but the various countries did not get along and the federation quickly collapsed. TT finally achieved full independence on 31 August 1962. In the 1960s and 1970s, the country prospered with large oil and natural gas deposits and became the richest nation in the Caribbean. In the late 1980s, however, oil prices fell dramatically, causing a major economic collapse. Thousands of Trinidadians left the country at that time to seek better opportunities elsewhere. In the 1990s and 2000s, the country recovered dramatically and continues to improve today.