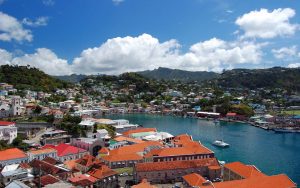 North AmericaSaint Vincent and the Grenadines

History Of Saint Vincent and the Grenadines

While the English were the first to lay claim to St. Vincent in 1627, the French were the first European settlers on the island when they established their first colony at Barrouallie on the leeward side of St. Vincent shortly before 1700. Caribbean Indians aggressively prevented European settlement of St. Vincent until the 18th century. African slaves, whether shipwrecked or escaping from St Lucia or Grenada and seeking refuge on St Vincent, mixed with the Caribs. St. Vincent was ceded to Britain by the Treaty of Paris in 1763), returned to French rule in 1779 and regained from the British by the Treaty of Versailles in 1783.

Slavery was abolished in 1834; the resulting labour shortage on the plantations attracted Portuguese immigrants in the 1840s and East Indians in the 1860s. From 1763 until independence, St Vincent went through various stages of colonial status under the British, and on 27 October 1969 was granted the status of an associated state, giving it complete control over its internal affairs. Following a referendum in 1979, St. Vincent and the Grenadines became the last of the Leeward Islands to gain full independence.

Natural disasters have plagued the country throughout the 20th century. In 1902, the Soufrière volcano erupted and killed 2,000 people. Much farmland was damaged and the economy deteriorated. In April 1979, the Soufriere erupted again. Although no one was killed, thousands had to be evacuated and there was great damage to agriculture. In 1980 and 1987, hurricanes devastated banana and coconut plantations; 1998 and 1999 also saw very active hurricane seasons, with Hurricane Lenny in 1999 causing major damage to the west coast of the island.

How To Travel To Saint Vincent and...

By plane The largest airport is E.T. Joshua Airport just outside the capital Kingstown. Most flights in and out are relatively local, mostly flying to nearby islands such as Canouan, St Lucia, Barbados and St Kitts. A new international airport is under construction and is expected to be completed in...

How To Travel Around Saint Vincent and...

The island is relatively small, but the mountainous landscape makes it difficult to get around. The main motorways run along the coasts and so it is necessary to drive around the entire island to get from one side to the other. As for public transport, the island is served...

Regions St. Vincentthe largest island, the largest part of the territoryGrenadinesan archipelago of 32 islands and bays, in the south Cities Kingstown - the capitalBarrouallieChateaubelairGeorgetown

Accommodation & Hotels in Saint Vincent and...

Many tourists arrive in the Grenadines, stay in a resort and never get the chance to interact with the locals. If you want a taste of the real culture, consider a guest house or holiday flat in Kingstown. Fort View Guest House in Edinboro is a good choice. It...

Things To Do in Saint Vincent and...

Carnival in early July a.k.a. Vincy Mas (lots of music and drinking)Eat pork or chicken at a roadside barbecue on Friday or Saturday nightEnjoy the view from Fort CharlotteVisit to the Montreal GardensHike the Vermont Nature TrailVisit the Botanical GardensClimb the volcano La Soufriere (not an easy climb!)Swimming in...

Money & Shopping in Saint Vincent and...

The official currency of St Vincent and the Grenadines is the Eastern Caribbean Dollar (XCD). The conversion rate is US$1 = EC$2.67. A helpful tip: If you pay with U.S. dollars, multiply the displayed price by 0.4 and you will get your change back. Most merchants accept both U.S....

Food & Drinks in Saint Vincent and...

In Kingstown the water is safe to drink, but in some other places you should be a little careful. Water quality can vary depending on the season and how the water (often rainwater) is collected. Bitter lemon is a popular soda. Hairoun is a popular locally produced beer. Adventurous...

Internet & Communications in Saint Vincent and...

Music popular in St Vincent and the Grenadines includes big drum, calypso, soca, steelpan and reggae. String music, quadrille and bele music and traditional storytelling are also popular. One of St Vincent's most successful locals is Kevin Lyttle. He was appointed the island's cultural ambassador on 19 September 2013. The...

Stay Safe in Saint Vincent and the Grenadines Cyclones are an annual risk. The volcano La Soufriere on the island of St. Vincent is occasionally active, but a sophisticated advance warning system is in place and resulted in no casualties during its last eruption in 1979. Stay Healthy in Saint Vincent...